Avalon is an apartment building in Brisbane on the corner of Harcourt and Brunswick Streets on the border between New Farm and Fortitude Valley. Built in 1929, the building has 26 apartments that are listed by letters instead of numbers, the first being A, the last being Z. Inside these old dark wood apartments live a collection of people as varied as the inner city – workers, retried people, artists, writers, dancers devout monks and others. In its 75 year history, the building has gone from being a respectable up market residence for professionals to a safe haven for prostitutes, to (briefly) a methamphetamine lab, to being affordable long term inner city housing.

You might think that Avalon is a kind of bohemian enclave but the reality is that it’s just a building with a long history, perhaps like many others in cities around Australia. But the difference between this building and others is that it now has its own biography, a book called Avalon: Art & Life of An Apartment Building edited by Ricardo Felipe, a resident himself.

Felipe wrote to us an asked if we’d like to have a look at the book and although we didn’t know anything about it we said, sure, send it along. Opening the book we realised that this was much more than just a documentary companion to a show that was held at the Museum of Brisbane about the building. The book is organised using the same alphabetical order as the building and includes historical documents, pieces on the history of the building, reminiscences from residents of different periods and works of art made by artist who have lived or still live in the building including Jun Chen, Leonard Brown, Sandra Selig, Luke Roberts and Skye Raabe. Avalon: Art & Life of An Apartment Building is a fascinating read, alternating between the everyday experience of people who lived in the building in the 30s and 40s up to now and including juicy tidbits of information and scandal, such as this excerpt discussing the 1937 case of the “The Camera Blackmailers”:

THE BARONET OF AVALON: Sir Siddartha Affleek, c. 1937. Perhaps only one member of the aristocracy has ever lived at Avalon, although his next address was Boggo Road Prison: Sir Frederick James Siddartha Affleck, 9th Baronet of Dalham, County Suffolk, England. In his book Sunshine and Rainbows historian Clive Moore describes the illicit exploits of the Affleck brothers:

The “camera blackmailers” case, as it became known, rocked Brisbane in 1937, when a Brunswick Street apartment building, still standing today, became infamous as a centre of a gay pornography and blackmail racket.

The Honourable Sid Affleck first came to the attention of the Queensland police in late 1937 when he and his brother Dalham, with Ernest Barker, were charged with conspiring to, and actually blackmailing John W. They had threatened to accuse John W., a blond twenty-one-year-old shop assistant at Pennys Department Store in nearby Fortitude Valley, of committing an act of gross indecency. One evening in early September, Dalham Affleck met John W. on his way to All Saints Church, luring him back to his flat in the Avalon building in Brunswick Street “to see some eastern articles”.1 Once there, Dalham Affleck king-hit John W., knocking him out. The young man claimed to have regained consciousness to find himself lying on a bed wearing only his singlet, with the two Affleck brothers going through his belongings. While their victim was unconscious, the Afflecks had photographed him committing “gross indecency”, presumably oral sex, with Dalham Affleck. When the police raided the flat in November they found a camera concealed in the wardrobe, focused on the bed, along with negatives and photos of other young men in similar positions. In evidence the Afflecks admitted running a club for “jaded business men who desired to come there for a play-around and be photographed in the nude. We have never demanded money from any of them and I can call them to prove it”.2 During the Affleck’s tenancy. Flat G in the Avalon building seems to have become a gay brothel, the brothers providing themselves or other young men for sexual services for well-to-do business men, and indulging in a bit of blackmail on the side … Today, the Avalon apartments in Brunswick Street remain in good repair, the street corner now a well-known haunt for prostitutes, both male and female. One cannot help thinking that if Sid and Dalham Affleck had still been living there they would have had a hand in organising their activities.” 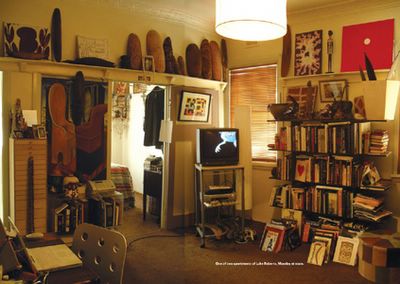 There is also a tour of the building with photographs of apartment interiors. Given the limited variation of the floor plan, looking into how each resident organises their lives and possessions in limited space is an insight into how people respond to architecture. Some are messy and some are neat, while others have converted their modest spaces into cool interiors worthy of Better Homes & Gardens. There is also a fantastic spread of a series of photographs taken by Luke Roberts documenting the ways in which a dead space at the top of a set of stairs is used by different residents – either moving in or out – to temporarily store their furniture. Going further afield, the book also has a mini photo survey of the uses of the name Avalon in different locations around the world, a piece on the origin of the name, and for the sake of completeness, an interview with Bryan Ferry on his experiences with apartment living and recording the Roxy Music album of the same name. Avalon: Art & Life of An Apartment is being distributed nationally by Modern Journal to selected art and design bookshops.

Say No To Nothing

“The Summer Wind, Came Blowin’ In…”