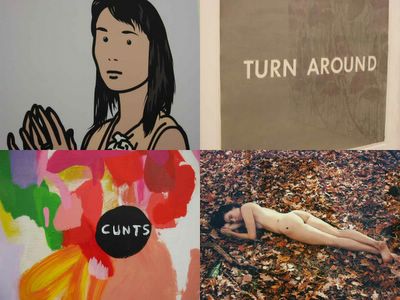 It all seems to happen at once. The Frieze Art Fair in Regents Park London opened on Friday October 21 and closed on Monday October 24. There were 160 art galleries from all over the world with the work of more than 1,000 artists on display. There were talks, film screenings, conducted tours and a performance by Karlheinz Stockhausen. On the same weekend – and just across the park from the vast white architect designed tent – was the Zoo Art Fair, an art fair with 28 new galleries, artists’ collectives and spaces. In the St Martins Lane Hotel was another mini fair with 50 overseas galleries setting up shop for the weekend. The Pilot Art Fair was installed in a space in Clerkenwell to exhibit the work of new, unsigned artists selected by signed artists, dealers and collectors. Over in Battersea Park, London’s Affordable Art Fair was open for the weekend with 125 galleries that sold art works all under £3,000.

In the days leading up to that mad weekend of contemporary art, The Guardian put the UK art market into perspective. From a variety of credible sources, the paper estimated the global art market at $USD23.5 billion per annum with the UK’s art market at 25 per cent of that figure. That’s an incredible amount of money moving through London – and the art market is London – the paper also reported that 43 per cent of the country’s galleries are located in London and that 50 per cent of artists in the country live there. London also leads the world in numbers of visitors to its galleries:

How Popular Is Going To See Art? – Top Museums by Number of Visitors.

The leading art gallery is – perhaps unsurprisingly – the Tate Modern but the truly amazing part of these figures is that the second most popular gallery, the Pompidou in Paris, languishes at a head count of just over a quarter of the Tate’s. London has built an industry out of its contemporary art scene and the rewards for artists and galleries lucky enough to get to the top of the pile are equally handsome. The Guardian published figures compiled by the Arts Council of England that estimated the income for emerging artists, mid career artists and established artists [those with major prizes, commissions and pieces in national collections]. The top of the pile, the established artists, could expect an income of between £50,000 to £60,000 a year.

Translated into Australian $$$, that’s about $150,000 to $175,000 a year, an amount that artists who exhibit with A–list galleries in Sydney and Melbourne could easily earn. The next rung down – the mid career artists who’ve been out of art school for ten years – can make between £12,000 and £32,000 in the UK. Again, pretty comparable with the Australian art world [albeit with more space on those career ladder rungs]. The real difference is at the bottom with the emerging artists. According to the ACE figures, emerging artists in the UK can earn between £500 and £20,000 a year. That’s almost enough to live on… 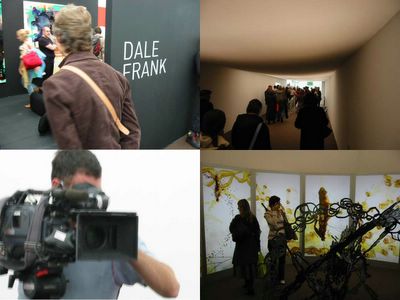 Autumn is a big time for art in the UK. New shows are opening in the major museums and public galleries and, aside from the art fairs, there’s the Turner Prize and the Degas Sickert and Toulouse-Lautrec at Tate Britain, major shows and retrospectives by Jason Rhoades, Mark Dion, Edvard Munch, Nobuyoshi Araki, Ilya & Emilia Kabakov and Francis Alÿs. Then there are the tourist traps like the Saatchi Gallery’s self aggrandising Triumph of Painting Part 2 and the eyesore that is the endless Dali show. This is all before you begin to navigate the dozens of commercial galleries. It’s too much and a decision had to be made. We could feel a little twinge at the back of our minds that said “Go to the art fair with all the unsigned artists, you’ll be doing the right thing.” Or should we go to the art fair with the best contemporary art galleries in the world, to see all the artists’ work we keep seeing in magazines and have little or no chance of ever seeing in an exhibition in Australia? The debate took about .5 of a second. We jumped on a bus for Regents Park and the Frieze Art Fair.

The Frieze Art Fair is only three years old but it’s already the European art fair of choice for the world’s leading galleries. To get in, galleries are screened through an application process. Some obviously go straight through, like the galleries from London and New York who support the magazine from which this gargantuan four day event has grown, but there are also galleries from Paris, Rome, Tokyo, Berlin, Munich, Moscow, Tel Aviv and Melbourne. The work you see at Frieze fits easily into the spectrum of contemporary art, but what was surprising was the huge amount of painting. It was by far the dominant form, comprising what seemed to be about 50 per cent of all the works on show, easily outstripping the photo art and the measly showing of DVDs. If video art is big, it’s only big in places that haven’t cottoned on to the fact that painting is back big time in contemporary art. 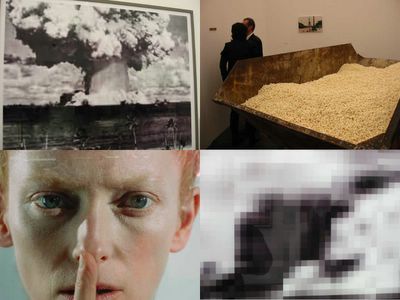 A year ago The Esteemed Critic at the Sydney Morning Herald described what he called ‘fey painting’, the groovy lo–fi work that’s incredibly popular in artist run spaces in Sydney. We have bad news. It’s a world wide phenomenon. Artists from Japan to Norway are bashing out pathetically inept pictures of cute bears, little girls, space ships, guitars and cars. The good thing is that we love it and it’s everywhere. Probably one of the best known of these artists is David Shrigley, a Scottish artist with no fear of the ‘c word’. His drawings and paintings challenge the viewer to meet his hopeless aesthetic half way, and then fail. They are also immensely funny. We mentioned last week how we had tried to see the work of Manfredi Beninati in Rome but hadn’t been able to. We shouldn’t have worried because his work was on display at Frieze. We had described his work as a kind of figurative Maria Cruz, but that was way off, it’s like a figuartive Ricky Swallow, because his work was displayed right next to the Boy from Oz’s monkey man watercolours. It all makes sense now.

Another kind of painting that was big at Frieze was a super slick and amazingly executed hyper–pop. The work of Justin Faunce reminds us a little of Ben Frost’s, but where Frost seems to be searching for a solid conceptual foundation for his otherwise impressive pop collages, Faunce has it in spades. His work is both occular and cognitive and adds a mind bending mirroring to his compositions. Rachel Feinstein, is mining the same seam as Glenn Brown, that is, an immacuately executed oil on canvas rendering of faux and quasi historiucal art to create something akin to melting wax works.

To prove that we’re not just interested in fashionable painting styles, we should also mention that we were taken by two artists represented by the same gallery, but painted in utterly different styles. Jeremy Dickinson is a British artist who paints weird pictures of toy cars and buses next to playing cards and blank, monochromatic backgrounds. A little reminiscent of John Brack, the works have an intensley idiosynctratic feel that’s like playing with your toys in the late afternoon sunshine of your lonely bedroom. Perhaps that’s the link to Atsushi Fukui, who paints psychedelic paintings of nude Japanes girls with stars for bodies, surfer guys with guitars and other throwbacks to the 1970s. It’s closeted and airless, but fascinating nonetheless. 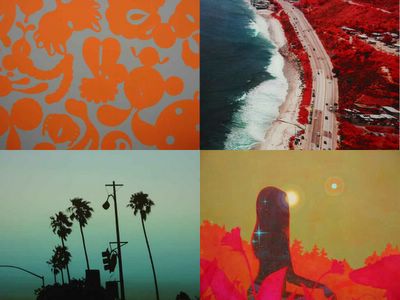 Surprisingly another hugely saleable area of contemporary art is text works. You could have knocked us down with the proverbial feather, but pictures by Art & Language were featured at three stands at the fair, including the classic piece by Ian Burn [pictured above]. More recent work ranged from loose flow charts and graffitti to gruff political sloganeering, pamphlets and newspapers. It’s fascinating that text is such a visible genre within art because, perhaps a little like decorative minimalism, it seems to exist on the periphery, but where this particular art fair is concerned, more is better. It also helps to be funny. Sean Landers work made it into the fair, courtesy of no less than eight galleries: “People think I’m a fucking comedian. Hey, I’m a serious artist for god’s sake, look at this painting […] OK, this painting isn’t a good example, but I’ve made lots of serious art before right???” 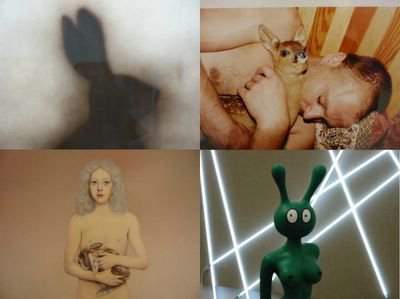 Photography is still huge being the second most popular form of art for collectors [according to The Guardian]. We can still be surprised by a good idea. Thomas Ruff, who did a series of works based on internet pornography, has branched out on a different tangent by using low resolution JPEGs taken from the web and blown them up to a massive scale. One work at Frieze, an immense shot of a mushroom cloud, was breathtaking. From the other side of the room, the image was perfect, but as you approached it, it began to break apart into pixels. There was also a mini theme of wildlife fauna that connected all the painting to the photography– we saw an inordinate number of works that featured rabbits. We realised we are starting to hallucinate and know that too much contemporary art is bad for you. With just a fraction of the thousands of works on display actually seen, we had to depart. 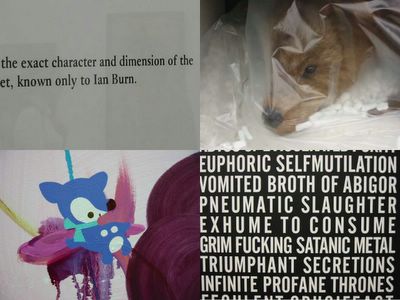 It would of course be absurd to draw too many conclusions about what’s happening in international contemporary art from the work at Frieze. After all, painting is most popular type of art with collectors, and the exhibits at a commercial art fair are tailored to their tastes. The whole event was skewed by both commercial forces and personal preferences. Yet at the same time, painting’s preeminence was undeniable. The influences of Martin Kippenberger and Gerhard Richter are still widely felt, and a new generation of artists are under their sway.

We are being drawn back. We thought that we had escaped, if only for a few weeks, but the super abundance of art at Frieze simply ended up underlining the paucity of the art life. When we arrived we discussed the illusion that we had more to choose from, that there was so much more. That is wrong, it’s just more. Home is a dull magnet that draws us back into the narcotic stupefaction of encroaching summer. How ironic that the British sent their economic refugees and political prisoners to the worst place they could think of, yet it turned out to be more congenial to a nice sun tan that where they had come from.