From Our Correspondents: Festa a Venezia #1

It’s all hushed and woody inside the beach shack – bar the blandishments of the paparazzi.

“Miz Blanjet! Ova here Miz Blanjet!!” Frozen half-smile. “Cate!” “Cate!” Inscrutable but intelligent. “Miz Blanjet!” Nothing, almost completely blank, except for the raised, plucked eyebrow visible above the rim of the eyeglasses. “Miz Blanjet” today is oozing hot and brainy, and she and everybody else knows it. Our Cate is waiting with the artist, some sculptor.

Martin Browne is hovering. Is Cate a client? Browne blushes. “Yes,” he says quietly, but proudly.

Gradually the glitz gives way to the art. You want to fondle the skeleton, rub up against it; and you’d happily pull up a pew at the kitchen table to kill some time over a cuppa. Touching the works of course is verboten. Touching the journalists however, is fair game.

Italian security guards bussed in to handle the Italian paparazzi feel free to manhandle the usual suspects of Aussie arts journos, possibly under the erroneous assumption that we would be muscular in our questioning. No, no curveballs today. Our Cate has more insights than the press, which is how it should be.

“Ricky’s work is particular but it isn’t particularly Australian – the more particular you are the more universal you become.” We ask young Rick what the role of celebrity is in contemporary art today. “It’s not something I pursue.” Thanks mate. 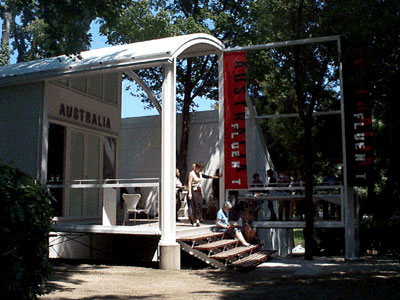 Soon we were all herded out on the patio for speeches. Sources close to ‘Our Cate’ say she was pissed off at the way she was used by the Oz Council in the launch, with focus thrown on her not the artist. Sad and true, but, er, what did she honestly expect? That we would all simply look the other way? Other sources say several high profile Aussies from different artistic fields were approached to form a kind of “A-Team” of Australian arts on the porch. In the end only Cate turned up. So much for teamwork.

Much the same sentiment could be heard by the prominent gallerists who’d been left off the A-list for the Australia Council Party that night at the ridiculously ritzy Hotel Cipriani. The dealers complained that they’d been blackballed because they didn’t fork over $5,000 to John Kaldor to become Champion Donors of the Australian representation at Venice. The Oz Council says Kaldor raised more than $750,000 towards the total cost of $1.4 million to mount the Australian representation. Now let’s see. There’s Ricky’s plane ticket, his hotel, freight and insurance for the artworks, the catalogue, Cate’s rider… hmmm that leaves about $1.375 million. Most of it would have been splurged on the upper crust party… Bellinis and canapés for the Champions to mingle… with each other! You’d think Kaldor would have at least invited Gilbert & George, having brought them out to Australia 1973. Certainly all the reflected hipness and cooldom one seeks from the art world was completely absent among the bevy of champions, corporate types and collector couples on the “trip of a lifetime”. All everyone wanted to talk about what a blast the New Zealand launch was the night before – no door policy, no black tie, no crass elitism, all art party hardy!

Back for more Ricky the next day and Tilda Swinton swans in with a scruffy bunch of admirers. Killing Time: “It’s fantastic, isn’t it? It’s amazing!” She approaches Ricky’s bike helmet with snakes (AKA. The Arrangement). “Gorgeous!” A po-faced teen is a bit stumped: “Does he do this with lasers or computers?” No, he actually does it with his bare hands.

Herein lies the seeds of a problem. Some whisper amongst themselves that once you strip away the “gees this kid’s bonza with a chisel,” you’re not left with much. Viz the sixty-something American couple overheard leaving the show: “This is just craft!” Ingrates, to be sure, but they have a point. Charlotte Day, the show’s curator, counters that Ricky is more about intimacy than innovation. And Swallow himself turns such slurs around without care. The centerpiece of the lower half of the space, the skeleton (The Exact Dimensions of Staying Behind), bears the artist’s chisel marks which in earlier works would have been effaced, indicating a more confident phase, as Swallow is happy to leave evidence of the artist’s hand. “I feel less apologetic now about the craft,” he tells us. “This is a performative activity, there’s no real reason for it to be invisible. I have no problem now unveiling the process if you like. The problem becomes knowing when to stop.”

Speculatin’ on a Hypothesis