What happened was this – we were out in the world making ill advised public speaking appearances to promote The Art Life. We live in fear that someone will launch themselves from the front row with screams of “I KEEEEL YOU!” and we will be carted off bleeding. In more realistic terms, we fear the difficult question and worry that once the talk is over and we’re feeling cocky, we’re going to blow the whole thing with a little loose talk. There’s also a person – probably a man – who will stand up, clear his throat, then launch into a dissertation which will devastatingly reveal the true nature of our whole project. We don’t know who he is, or what he will look like, but he’ll be balding, wearing glasses and have the smile of an assassin.

That man may have been Roger Benjamin. He was there on Friday at Sydney University. We had just said something about catalogues [and using a MCA publication as an example] as being like memento mori… Benjamin scoffed, “That’s a bit strong, don’t you think? Surely you just mean a memento?” Our blood ran cold. Did we just mean memento – or did we mean and an “object incorporating emblems of mortality, designed to remind the viewer of the inevitability of death”? Well, yes, we meant memento mori, but it was a close shave. Then we made some flip, off the cuff remarks that left a nice academic lady looking cross and confused and so we say thank god for Margaret Mayhew who took the bullet replying with something credible about ethnography. But like, who is calling who ethnic here?

An artist friend remarked that it isn’t the public speaking that’ll get you, it’s the question and answer session that’s the killer. The next day at the Art Gallery of NSW we kept our answers brief and enigmatic, sticking to what we do best – apolitical jokes designed to make everyone feel good. Speaking of which – did you know that if you type “Brian Sherman” and “Pig” into Google you get a website dedicated to freeing pigs ? Yes, there’s been quite a bit of non-art related action at Sherman Galleries where the whole family is attempting to liberate pork.

Ondine Sherman’s years were spent handing out leaflets for Animal Liberation New South Wales, rescuing ducks injured during the hunting season and debating the legitimacy of her vegetarian lifestyle with family friends and school mates. While not in itself a remarkable or unique teenage pursuit, her passion for animal rights eventually infected her family. One by one, the Shermans became vegetarian and ate their meat-free meals around the kitchen table.

But this was no ordinary kitchen table. Years earlier, Ondine’s father Brian and his business partner Laurence Freedman had developed their funds management business Equitilink around it. The Shermans enjoyed the sort of success that migrant families dream of. Brian and Gene Sherman had escaped the horrors of apartheid in South Africa in 1976 with their two young children, Ondine and Emile, and $5,200 in the bank. Taking a risk in the early 80s, they built Equitilink from a company with no clients into the largest privately held funds management company in Australia. They controlled $6 billion of investors’ money and when in 2001 they sold it for $152 million, Brian had the time and the right sort of influence to become Ondine’s most powerful ally in her personal fight to end the abuse of animal rights.

The Voiceless organisation got Hugo Weaving to say that Porky should be off the Xmas menu, leaving the way open for pigs to live rich full lives before dying of old age, gently, and in their sleep. 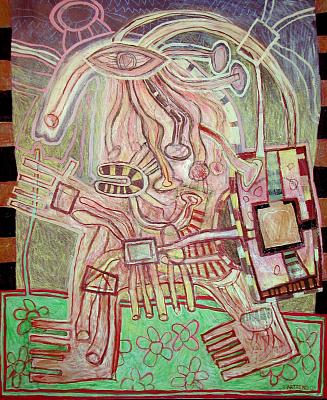 We have been receiving a huge number of emails lately promoting new artist web sites and blogs devoted to art related activities. We also get the odd piece of junk mail that has something interesting to say. For example, if you wish to be an artist you need to choose a good name. If you were born as Fred Nerks you might like to think of a different name – say, Dale Frank or GW Bot – to replace your dodgy moniker. If by some stroke of luck you have ‘art’ in your surname, don’t change it, in fact, nominative determinism means that you will become an artist in any case. Reinhard Artberg writes to us to promote his website:

I am many times in New-Zealand and painted a lot of pictures in this beautiful country. Austria created 1996 a stamp (artberg-marke) from the picture “power-station” with is was a inspiration of the bright sun over Kawakawa. I painted this picture 1995 when I was invited by my friend Friedensreich Hundertwasser. I would be happy if you spend some time to have a look to the homepage….and enjoy my art work.

David Rex-Livingston also emailed us to remind us of something we said in December 2004 and that it was incorrect, namely that his gallery was a shop window open for ten minutes on a Friday afternoon. This is not the case “and has not been since February of 2005,” says the man who friends called ‘Seagull’. “Onwards and upwards!!!” All the exclamation points were in aid of a new show by Peter Cameron – Guthega ~ The Abstract Landscapes – an exhibition officially opened by John Firth-Smith last Thursday and which runs until December 17. Apparently Firth-Smith only agreed to open the show because he was cornered in the gallery one afternoon as he tried to escape McLean Edwards, an artist who regularly terrorizes shop keepers in and around the Abercrombie Street area. Rex-Livingston saw his chance and proposed that Firth-Smith open the show. The artist agreed saying that they could compare hyphens.

30 Years Ago In The Art Life