Now this is weird. We were told last week that an image of a work by Patricia Piccinini had turned up on an Arabic language web site. Going over to the
site we found images from The Leather Landscape with a story that purported to explain how the half woman/half numbat in the work had been created:

This picture was a young Oman lady who was listening to music very loud, at that time her mother was there and was reading Quran Al krim and the young lady told her mother to stop reading the Quran Al Krim and told her mother you always read the Quran around me, but the mother did not listen what her daughter said. Then the young lady took the Kitab Quran Al krim from her mother and threw to the grown then the mother picked up the kitab Quran Al Krim and but in her chest and was quite. The young lady become dicey and sick at that moment after she threw it away and fail into the grown then GOD make her Animal that no one have seen in the world before “Maansha Allah.” 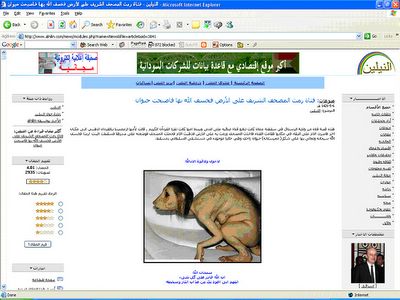 At Piccinini’s web site, the main page has been temporarily replaced with a statement that says in part:

Patricia is an artist. The image is a picture of an art work – a sculpture made from silicone rubber. It is about genetic engineering and our evolutionary links to animals. It is not intended to refer in any way to any religion or religious practice.

Patricia is deeply sympathetic towards anybody who has been upset or disturbed by the hoax. She is very unhappy that her work has been stolen and used in this way.

Given the hysteria surrounding anything to do with Islam and Koran abuse, we sympathise with the artist – there are people out there who believe her work is evidence of God’s wrath on unbelievers. Even though people may have access to the web, it doesn’t make them any less susceptible to a hoax, especially one that supports a belief in a deity who goes around turning women into rats. The web site looks like the Arabic language equivalent of Weekly World News and with its ads for ring tones, the time and cheesy shots of businessmen, seems harmless. That is however until you start scanning through the comments. Although nearly all of them are in Arabic, there is one comment that chills the blood:

In the name of allah, salam alikom, this story is 50% true, but as muslims we should be very careful about what we say even if those who fabricated the story ( if it’s not true) but meant good out of that they shouldn’t do it because if you want muslim to fear allh you can do it by jenuin advice using Aquran and aalsuna.and that’s more than enough. Meanwhile I’m not saying this is untrue because allah punished bey Israel the same way.I t can alo be untrue. Because it’s very easy to do this picture with computer animation. Second the family of this girl,I don’t think send her picture to the news. Finally I noticed she’s naked, may I ask why?

Yes, all good questions, but you know, this story may be 50% true – and it’s a good idea to hedge your bets. It may be true that God changed a woman into a manimal because she her tossed her mother’s copy of the Koran on the floor… Or it may be a photo stolen from an artist’s web site. Holy shit. [More]