As you might expect, there was a lot of video and photography in Hatched05 and not much of it very interesting. Most of the works obeyed the rules of video production and stuck to well known and well worn modes of presentation. Rhys Turner from Sydney College of The Arts deserves a special medial then for breaking with all the conventions of interactive video, the most impressive of which was that it was working throughout the time we spent at the show. Aren’t these things meant to break on opening night? T

he work is called Video Stereo and consists of a turntable with a pink plastic record on it and a video monitor both mounted in an old stereo set up. Visitors are invited to “scratch” the video like a DJ by moving the record back and forth as the arm of the player tracks over the vinyl. As you push backwards, the image and sound goes backward. If you go forward it goes forward, if you go back and forth, the image and sound stutters in the DJ style. It appears at first that the video and sound information is on the record and that the artist has somehow managed to create a hybrid analogue/digital interface using two different kinds of technology, but playing around with the work reveals that there’s some sort of software behind the scenes simulating the experience. The work is masterful in its ability to set up what feels like play for the viewer and then extrapolate that experience into something where you try to figure out what is happening and how it is done. 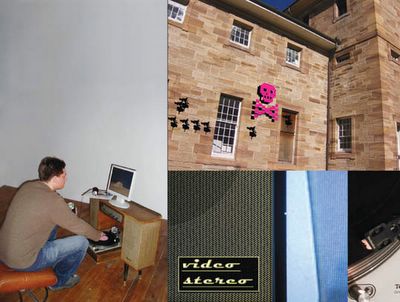 Queensland College of Arts’s Genevieve Staines has a work called 21st Architectural Gothic that invites viewers to experience a similar set of interactive controls in her video installation. With five pressure mats facing a screen at the end of a dark hallway, the viewer sees the skyline of Brisbane appear and disappear in stages until only a single building remains, then just nature. The act of erasing a city back to some form of semi-natural environment is a richly evocative experience, even if the technology the artist uses seems a little clunky. Speaking on her work at the Hatched05 symposium, Staines showed a number of other pieces where she did similar things to other views of Brisbane and it the effect was stunning.

Single channel videos at Hatched 05 weren’t much chop but one that stood out for the simplicity of the artist’s vision was a work called Unlossless Format by Tom Halliday of the Charles Darwin University. The piece was a single frame made up of four rows of four images which were crudely drawn images of random porn, TV snippets and atomic explosions. The soundtrack was an overlapping collage of spoken voices, all American, saying very anonymous things. Reading the catalogue we discovered that the artist had sourced all the images from the web and created rotoscoped drawings of the sequences by following a set of rules that he had set down for himself such as how each frame had to be completed under two minutes, each frame had to be of the same dimension and that each be completed without reference to the last image. Sometimes artists lose sight of the borders of their projects taking in more and more things until the focus is lost and the work is too loose. Halliday, by creating a tightly structured experiment where the end result is only constrained by the simplicity if the idea, stood out as an artist who was clearly in control of both the form and content of his work. If you were looking for art to put in a show, that’s exactly what you’d be looking for.