So then we crashed the van. It may have only been a minor scrape, but these things cost money and it left us feeling uncertain. We strode into First Draft confident that we’d have a nice little visit, not be too challenged, maybe have a laugh or two and be on our way, but we were wrong again.Kids these days are into being all conceptual and there were four simultaneous shows to prove it: Dinner with Hopp by Matthew Hopkins, Tough Nuggets by Vicki Papageorgeopoulos and Ella Barclay and the group show called MFD with Adam Norton, Kyle Jenkins, Ron Adams, Manya Ginori, Anna Peters and Reuben Keehan.

Let’s start with Matthew Hopkins. We should get the inevitable comparison with Hany Armanious’s work out of the way straight off the bat. There were a couple of pieces by Hopp – self portrait sculptures made from plastic bags, rubbish, bottles, chewing gum and other detritus – that reminded us so vividly of an Armanious show at EMR Gallery back in the late 1980s that it was uncanny. It’s probably just a coincidence and we’re not suggesting anything else, but it was very odd to see something so amazingly similar. The comparison doesn’t end there either, but not because the rest of the works in this charming small scale show looks anything like Armanious’s work. T

he connection is that Hopp, like Armanious, appears to have a very healthy sense of humour coupled with an almost god like understanding of materials. The best pieces in Dinner With Hopp take the materials and create a kind of double take between what they are and what they depict. To explain: Dinner Etc is a drawing of a plate, a knife and a fork on a piece of paper. Stuck on the paper are pieces of different coloured chewing gum that create the food on the plate, peas, mash and steak. In another piece, a sculpture called Rebellion #1, the work is made entirely from bubblegum and chewing gum and creates a perfectly realised chicken ready for baking [albeit for small dinner party]. The sophistication of this game playing is fabulous and if Magritte had said “This is not a chicken” he would have only been half right. A placard resting against the wall read: 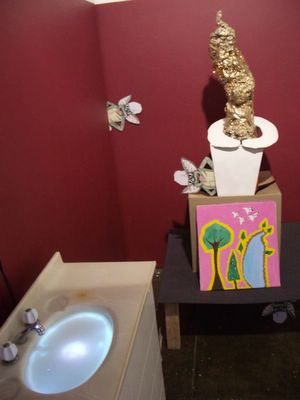 Papageorgeopoulos and Barclay’s installation in the big space is called Tough Nuggets and it’s a pile of shit. That’s a joke, by the way, and one we’ve been looking forward to using for years. Thanks to the artists! The show is an elaborate extended metaphor for laying an intellectual cable and is replete with toilet paper scattered on the floor, cardboard cut out Gremlins [from the movie Gremlins], DVD projections and wonky looking vanity unit set up on one wall. In our advanced state of crapulence, the installation was extremely demanding. Papageorgeopoulos’s piece Gold Rush was a huge mixed media installation with an actual turd made out of 24 carat gold. Surrounded by grinning gremlins, the work had a demented carnivalesque feel. Right next to it is Urgh by Barclay, a DVD projection onto an opaque surface in the off white surface of the ‘water’ in the vanity unit. There’s no sound, just a face looking down, as though into a toilet or a bowl of water, gurning and grimacing.

It would be wrong of us to say we understood what Tough Nuggets was about and extremely hard to guess. According to the press release Papageorgeopoulos says that “it’s all about vomit and turds in the end”. We’re not sure what ‘end’ is supposed to mean in that context, but if by ‘end’ she means the absolute end, then yes, we agree. The installation delights in its own perversity and lo fi production values and challenges the viewer to come up with a formula to explain it. Perhaps we’re trying too hard here, straining and sweating too much over the minutiae of the works. The show was very funny, and that’s more than enough.

In comparison MFD is a group show with a very clear intention – all the works engage with the mechanics of image making, the reflexive processes of creating art and do so in a variety of ways. The show is also a very didactic demonstration of how dangerous it can be to be so self consciously aware of your own processes – carrying this kind of thing off is extremely hard. Not only has it been done before, better and a hell of a lot of times, conceptualism long ago headed off into the dark waters of a highly self regarding mannerism. Let’s call it Conceptual Mannerism and get on with it.

Adam Norton paints a very nice monkey in a painting called Rhesus Monkey which is part of a series of four works that includes a portrait of another guy named Adam Norton, one of Benito Mussolini’s profile and one of an alien. When the penny drops, you can actually feel it, like the coin is going into a slot in the top of your head and down your back. We had that feeling in front of this series and it was kerrrching straight away. Yes. Portraits! Of different things! Hoorah! Next to Norton was a piece by Kyle Jenkins called Monocut #6 which was a small square canvas with the top left hand section of the canvas razored and lifted back to reveal the stretcher behind. It wasn’t for sale, which was a shame, because we would have liked to have put it next to our see-through Mark Titmarsh painting that reveals the stretcher behind. It doesn’t matter that these works blew their conceptual seed so quickly because we still enjoyed the intellectual intercourse.

It’s kind of funny in a way that artists making this type of art are so didactically obvious. It’s like saying, yes I know I’m being obvious, but that’s part of the deal. I have to acknowledge the obviousness because it’s not the object per se that is the subject of the work, but the idea that created it. Obfuscating the process would just short circuit the work. This kind of intellectual formalism makes Tough Nuggets look like pure anarchy. Ron Adams’s works are three canvasses that incorporate their titles into text that’s painted on the canvas – not in an obvious way – but all mixed up so you have to turn you head around to read it. You look at the room sheet, then at the painting. Oh right, you think, and then move on to the next one. It’d be great if all the works made a sentence. In this case it’d be There’s Two/We Think, We Think Not/Looks Like An Ear. Does that make sense?

Manya Ginori work is elegant and simple and totally old school. We know 70 year old artists who taught at Alexander Mackie who’d just go bananas for this work. There are four square canvases in a row on the wall. On the right is a wooden sculpture called Spiral Construction [that looks a bit like Malevitch’s Monument to The Third International] stuck to the wall. The shadows cast by the sculpture are the source for the drawings on canvas. And that’s all you’re getting, as plain and simple and as forceful as cheap vodka on a freezing night. Suprematism, da! Anna Peters’s work, by comparison, is a lot looser, cartoony drawings on paper plates, paper, acrylic on canvas are jokey one shot reflexive gags. We thought them kind of crappy but had charm.

The most interesting work in MFD is the most complex in terms of its allusions but also the most confusing. Bibliography of a Painting (It’s Your Move Comrades!) by Reuben Keehan is just one canvas stuck to a wall with an accompanying reading list provided on a plinth nearby. “The above works were consulted in the development of this painting. A condensed reader will be available shortly. Please Contact MOP Projects to register interest.” And there is a reading list: Carl von Clausewitz’s On War, Malcom Lowry’s Under The Volcano, Nietzsche’s Ecce Homo and Karl Marx’s Early Writings among them. The work itself is entirely white except for the text Vous De Jour Camarades! painted on it at the bottom and rough and textured with clumps of paint in the style of Yves Klein’s textured monochromes. We pondered the work for a long while until we decided that the artist had taken pages from these books, chewed them up in his mouth and then stuck them to the canvas. We’re not sure if he really did it, but in a way, he did. And that’s something to think about. The end.

Ghost In My House