Who’s Afraid of The Avant Garde

The Performance Space is up to part three of their four part series of exhibitions of installation works for 2005, Who’s Afraid Of The Avant Garde? Tony Schwensen’s installation works in March were Part One. We must have fallen asleep for Part Two and now Part Three is here with works by Stephen Birch, Alex Gawronski, Astra Howard and Raquel Ormella. [Part Four will be on in December and feature presents, games, cake and a visit from Santa. Hoorah!]

The sign outside the Performance Space says the show is called Who’s Afraid of The Avant Garde without the question mark, turning what is meant to be a question into a statement. Perhaps it’s an answer to the exhibition’s titular inquiry, we don’t know, but Blair French makes the argument in the exhibition catalogue that the whole notion of the avant garde – the tendency to radicalism that emerged in the mid 19th century – was discredited with the arrival of post modernism. He also claims that modernism’s project of connection with socially progressive movements – social and political causes, radical aesthetic programs and so on – were separated from the artist’s relationship to society in the 1980s and 1990s. These arguments are in part true, but only if you take a very selective view of the history of art over the last 20 or 30 years.

The title of this show is a kind of non-question because while it’s possible to construct a lineage of shifts and movements in recent art history to back up French’s claims, it’s also possible to construct a counter history that is constant, with no breaks, purges or discrediting of one form, style or approach over another. To give just one example, as we noted in our review of Disobedience, the self conscious positioning of political art has been running uninterrupted since the 1920s in forms and approaches that have barely changed. So to the question of who is afraid of the avant garde, the answer is no one really, not in terms of either the kinds of art that is being made – and all of the works in the show are direct descendents of international contemporary art forms well known and loved for decades – nor in the works connections to their conceptual framing.

The Performance Space web site explains the project this way:

Each project engages with avant-gardism in manners that suggest its reinscription as a paradigm for art and social action in the 21st century. Part 3 of this series comprises four newly commissioned installation works by NSW artists.

Perhaps this last paragraph from French’s introduction will explain more:

The hybrid modes of performance and media arts practices that have always been at the heart of Performance Space programming, along with our emphasis upon inter-cultural practice, lend themselves to a constant rethinking of the dynamics of avant-gardism. Who’s Afraid of the Avant-Garde? has brought this to the fore by setting out to frame work that engages with the historical and social complexity of art practice and its relation to the social in a way that is both emblematic of its moment, but that also gestures towards the future, acting as both critical drag regarding its conventions and energetic driver of new forms.

The four installations in Who’s Afraid of The Avant Garde 3? are weirdly deployed in the gallery space, as if following some sort of underlying gender assignment. Ormella and Howard’s pieces are explicitly and obviously engaged with social issues while Birch and Gawronski turn towards art history and art world economics for their kicks. A coincidence? We must acknowledge the deftness of the choice of artists – or the astuteness of French’s essay – because the whole thing is tighter than a Matron’s bun. 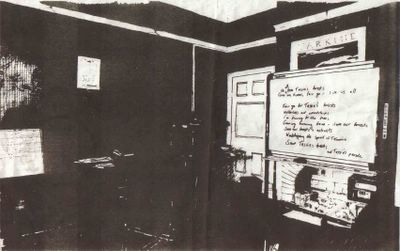 Raquel Ormella’s Poster Reduction, it must be acknowledged, is also extremely conceptually tight. An electronic white board stands in the room with two alternating images. Press a button and you see a green on white drawing of a tree, press it again and you get a drawing of the shared office interior of the Wilderness Society, the Greens and the Huon Valley Environment Centre. In this drawing – a sketchy thing done with white board pens – there is another whiteboard with slogans on it such as Fair Go For Tassies Forests and Wilderness Not Woodchips. In the Performance Space gallery, two large, low resolution prints of the drawings on the white board are stuck up on the wall. Viewers are invited to press a button and print out from the board drops out.

For people such as us, who are obsessed with the recursive nature of signs, Poster Reduction is like a series of mirrors reflecting each other into a distorted infinitude of mixed interpretations and intentions. The catalogue proposes that the work is dealing with the iconic nature of the images, but the complexity of the representations in the work and the codified ways in which these images are presented, seems to defy such a simple interpretation. The step from tree to paper to print is a subtle and deft explanation of how one thing becomes another, an alchemical shift in forms, while on another level, the work seems to be freeze the relationship between actions. There is the tree, and there is the organisation that tries to save it, yet here is the paper in our hands.

The video work installed by Astra Howard has no subtlety at all, and that’s not a criticism, just a statement of fact. DomestiCity is 41 minutes long. Images of pretend homeless people dragging a box around Sydney’s CBD with a long rope are intercut with shots of sculptures set up in alleyways and back streets that involve mannequin legs, sheets, cardboard boxes and other detritus. The idea, apparently, is that the video documents shelters built by street people but exaggerates them and in turn “makes obvious these otherwise hidden and camouflaged forms.” There are also shots of people watching the box dragging performance and their puzzled faces say it all – does such a dramatic lack of subtlety defuse any of the good intentions the artist so clearly has? – or is it just a stunt for a mobile phone company?

The alleged reference points for Stephen Birch’s installation The Trip are Rene Magritte’s paintings and Georges Méliès’s A Voyage To The Moon. The installation is a room decked out in black curtains with a giant mushroom with a pipe, a model of the moon with a face on it hanging from the ceiling and a log with a big red tongue sticking out that moves up and down and furls and unfurls. The mushroom and moon are an off grey colour and the log is brown while the tongue is a ghastly, livid red. The only sound is the mechanical whirring of the machine behind the scenes. We thought not of those ancient films and Surrealist paintings, but of Lewis Carol and the generation of acid fried hippy artists of the 1960s who delved back into the art of the fantastic for their lysergic imagery. The title of Birch’s piece seems to confirm these reference points, but its meaning is certainly opaque.

The play of scales in the piece is immediately beguiling and lends an immediate theatrical impact that Ormella and Howard’s works lack. The spookiness of much of Birch’s work – and his collaboration with Rosemary Laing in particular – seems absent at first in The Trip, but the installation soon conjours up a creeping sense of dread that is hard to shake. The story book anthropomorphism is cute but anyone who has spent time at Luna Park’s old Coney Island, watched ancient cartoons with signing mice or have started to conflate non-living, non-sentient creatures with real, living, breathing things, knows that the fun can soon turn to terror.

Alex Gawronski has a work called ANTI-chamber and it’s a corker. Walking into the room, the viewer is presented with a wall with pairs of eye holes cut into it. Peering through you can see what looks like a waiting room in an office. As you follow the wall around a corner, you gain access to the installation, a room with chairs, framed pictures on the walls, a low lamp hanging over a coffee table and a video monitor. The monitor is relaying a live feed from a small camera in the light over the glass coffee table and underneath the table are copies of Frieze and Australian Art Collector and various catalogues. As you look around the room you see that the framed prints on the wall are books which used modernist art works on their covers – Surrealist and Constructivist paintings on books with names like Liberalism & Modern Society, Micro Economics and Economic Growth. The eye holes cut through the Gyprock walls turn the abstract pictures into faces a la Mon Oncle . There’s a door at the end of the room with frosted glass and the words Gallery Legitime painted on. The door is locked tight.

It’s hard not to see this work as an explicit commentary on the art world. Forever waiting and locked out of the main game, viewers are left with the collateral of production – catalogues, buyer’s guides, TV that relays the same information back into the loop. It would be a deadeningly solipsistic work if it weren’t for the humour – the texts that brutally appropriate art to mask their contents become masks themselves, genial and fun companions who watch over the [non] action in the room. In the same spirit, Gallery Legitime seems like a sly reference to the artist’s quest for legitimacy through a direct plea – “Gallery, legitimate me.” Sorry, the art world is currently full but we have your details on file – perhaps you’d like to read a nice magazine while you wait?

Everything Wrong Is Right Again