1. In the future there will be no art because everything will already be art.

2. In the not too distant future a wall will be built that will seal off the Eastern Suburbs of Sydney from the rest of the city. Only people with government issued day passes will be allowed into the Eastern Zone to see shows in commercial art galleries. Once their business is completed, people will have to leave immediately or face deportation and a permanent ban on entering the Eastern Zone again. The strangest feature of this wall is that it will be psychological only and have no actual physical manifestation. 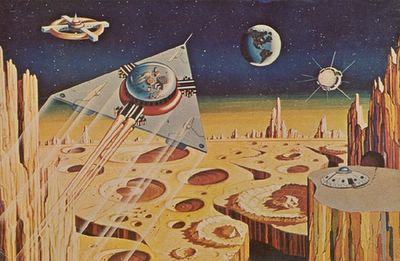 3. In the future, musicals will be staged in Sydney celebrating 9/11 with an all-singing, all-dancing, all-Australian cast.

4. In the far future someone will adequately explain the relevance on non objective art.

5. By the end of the year we will be suffering through the Great Anecdote Crisis of 2006. It will be a terrible time. People will run out of stories and everyone will be reduced to talking about the weather. The Sydney art scene will begin to grind to a halt by late November. To alleviate this terrible situation, the Federal Government will import anecdotes from New York and London and Tokyo until people can again begin to confidently tell their own stories. The Crisis will finally pass by February 2007 when everyone gets back from their holidays.

6. In the future, painting will make a big comeback.

7. It might seem that in the future things will be different. The surprise is that things tend to stay very much the same, there’s just a lot more of it. Way back in the 1970s not long after we first became conscious of ‘culture’ the way to find out about things was to watch TV, go to the movies or, if you had a marginal, specialist interest, you bought specialist, marginal magazines. The lines of communication were slow and it took a long time to find out about anything. By the time we saw the Sex Pistols on Countdown they’d already broken up. Places that seemed impossibly exotic – South America, Japan, Eastern Europe – were lost inside information blackouts. In the mid 1980s very little had changed but by 1993 the future we live in now was on the horizon. Instead of finding about a band before they’ve broken up, we’re actually buying tracks on iTunes even before a band have even formally released anything. The main difference between now and the past is that communication, mobility and availability has increased exponentially. The future we can see coming is one of immediate availability wherever we happen to plug in, and it will affect the off line world just as profoundly as the on line one. 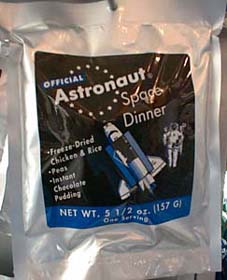 8. Future historians will look back on this period and wonder why, in the face of some of the most important events and issues to face us, artists largely chose not to use these events and issues of the day as the subject of their work. After much study, some historians will come to the conclusion that art in the early 21st century had collapsed into a solipsistic self regard from which it could not awake. Other historians will argue it is the nature of art to only reflect the interests of artists which, to a large degree, is only ever about themselves. The first group of historians will argue that this precisely what they mean by “solipsistic self regard” prompting the second group of historians to demand that the first group put up or shut up, in turn prompting the first group to issue a challenge for an all-academic dance off to decide, once and for all, who is the “illest” and most “fly”.

11. By the end of the next decade, there will be so many travel grants, scholarships, overseas studios and residencies available, artists will only have to punch in a their personal ID code at a handy info kiosk at the airport before they can jump on the next available trans-orbital shuttle to an exotic destination where they can while away their time making art while being appreciated by far more open and accepting societies than our own.

12. By the end of the decade, all DVDs currently being produced and sold by artists will be obsolete, unable to be played on any domestic machine and all the current work will be consigned to libraries, museums and other such institutions with specialist playback facilities.

14. In the future, artists will come to realise that everything is connected. Commercial galleries can only exist because of their artists who graduated from art schools attached to fully funded universities; and who worked in, showed at and helped continue operating artist run galleries; but these artist run galleries will have only continued to exist because the people who run them realised that, to ensure continuing funding, they had to vote for the political party with a policy that would allow the profits of the sale of work by dead artists through auction houses to be taxed to allow the payment of fees for living artists in public museums and galleries; and that the profits of sales of works by living artists should go to them regardless of how many or how few actual works of theirs are sold at auction because, after all, they were the only artists in the community who did not share in a royalty scheme for the repeat sale of their work and; although they may be indigenous, they had as much right to decide who got to spend their money [i.e. them] than some suit in an auction house. 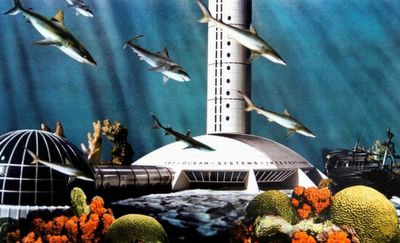 16. Sculpture will be considered the new video when video becomes the new painting leaving a space for sculpture to become ever more popular. In the future, however, space will be at premium as the population of Sydney exceeds 25 million and there will be very little room for things on the floor. Thus, sculpture will relocate to walls and will be very flat with few sticky out bits, in turn signaling the final victorious return of painting from the DVD player to its natural home, the wall.

17. In the year 2525, if mankind is still alive, a bottle of Firstdraft West Shiraz will fetch close to a million dollars at auction. The wine however will not be drunk, but the bottle placed inside a special sealed transparent tube where it will be viewed by all those wishing to observe “alcohol” next to some “nicotine”.

18. In the future artists will only make art, writers will only write, curators will only curate and the audience will appreciate their efforts.

19. A point of special interest to future historians will be why, during this current period of the proliferation of new technologies, new distribution modes and delivery mechanisms, even the most so called “cutting edge” art was in fact mostly based in technology at least a decade old, or if seemingly more up to date, why was its content repeating well worn generic positions vis-à-vis the situation of the artist, the audience and the delivery device? People will look back at the death of commercial galleries with a sense of wonderment that such antiquated 19th century sales techniques were being deployed well into the 21st century. It will be asked why artists seemed to want to continue a system that actually disadvantaged them in a profoundly unequal economic relationship.

20. In the future, the following reasons for not liking an art work will be automatically disqualified and, in extreme cases where these reasons are combined into what is called a “prejudicial view”, the person may be sentenced to 25 years in prison and/or a $25,000 fine:

21. Eventually the semi-sentient group life form known as The Art Life will cease to exist.

22. Very soon we will no longer be able to travel overseas because of skyrocketing fuel prices, ozone depletion and a security crackdown on all unnecessary air travel. Aside from the super rich who will be able to afford it, or those with enough time to work their passage to Europe onboard a container ship, art culture will only be about the country and probably just the city you live in. The upside will be a concentration of artists in one place who have only each other to entertain.

23. To celebrate its centenary in 2086, October 28 will be promulgated as Firstdraft Day, a national holiday for all artist run spaces. Its influence and effect on the Sydney, national and international art scene will be acknowledged by all, and its many organisational quirks will be similarly acknowledged as the reasons for its continued existence.

24. Someday quite soon art will be understood mainly as a practice and philosophy of communication. An audience consists of people who generally want to understand what an artist is doing. If an artist has something to say, by and large, the audience is at least curious to know what it is. If an artist fails to communicate or, more dangerously, celebrates the fact that they haven’t, or will not communicate, an audience has every right to hunt down the artist to exact their revenge. 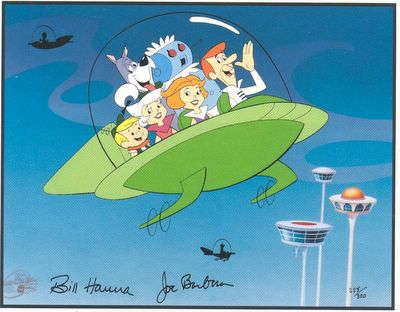 25. A saying of the future will be “the proliferation of forms alone does not guarantee variance” meaning that just because there’s a lot of something doesn’t necessarily mean it’s a good thing. The so-called crisis in art criticism is about the proliferation of a certain kind of art writing, and the sudden drop in numbers or the actual disappearance of other kinds. Although we fear the death of one thing and hang on to memories of what we thought it once was, or could be again, we need to take advantage of situations as they occur, seeing in these developments opportunities to exploit creativity in new venues. It may be in the near future that the continuing stand alone gallery funded by government largesse will disappear. The challenge is either to forget the old model and to find new opportunities, or the challenge is mount an effective fight back. Either way, the only way to make things happen is to make things happen.