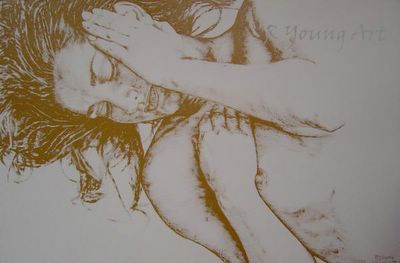 Description: Painted entirely in Gold Ochre paint to give a softness to the artwork, using only a knife, leaving the background canvas pure white, in its natural primed state. (Excuse my digital camera – it’s colour blind!) A superb sensual and large original artwork that would transform a bedroom, upper hall, landing, staircase or similar room (be brave and imagine it downstairs…) and be a focal point to be proud of. See below image of it hung on my wall for reference, though note that it’s actually hung on its side due to the limited space. It still looks nice though… 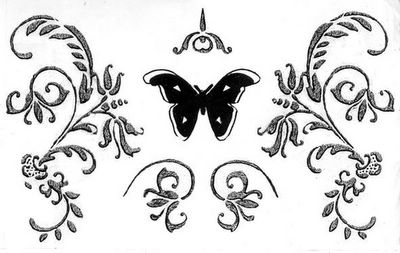 …the technician/operator must not be discouraged if no pronouncement is forthcoming from an oracle; such determinations are out of our hands. These oracles, as you will notice from the technical specifications displayed in this text, are very simple devices. In terms of technology there is virtually no difference between our Public Oracles and a domestic AM/FM transistor radio, our only contribution has been to augment this pre-existing technology by means of introducing physical elements of practical application derived from Occidental hermetic sciences and philosophies, altering the body of the device so as to transform what is essentially a metal shell & radio into a consecrated vessel suitable for habitation by an oracular intelligence….. The construction, augmentation and installation of these public oracles is our task, our labour, but our influence and control stops here, we can do no more. The probability of an oracle speaking is not something that we can predict or determine, it is wholly dependant on the caprice of the entities we are attempting to summon…..And if the oracles do not speak? What then? What does this mean? The technician/operator must thoroughly reread this manual and all associated recommended readings to see if there is some task that has not been properly completed or some symbol that has been incorrectly transcribed. The device itself must be checked to ensure that all parts are in working order as there may be some damage to the oracle that is inhibiting proper functioning, if this is the case the damage must be repaired. It may even be a matter of exercising the simple virtue of patience and waiting. Then, still, if we wait and there is no voice, no message, perhaps then we must concede that the time for oracles is past and the voices that once spoke to us have been driven from existence into silence. 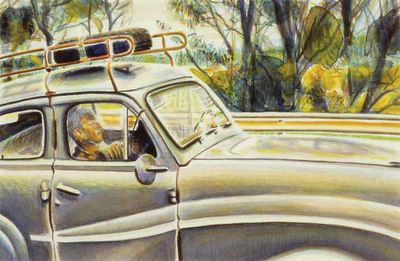 The works in Stephanie Monteith’s exhibition – Album – are a reflection upon our petroleum fueled world, they also signal the beginning of a huge project – to document the motion of life.

Predominantly consisting of meticulously rendered watercolour paintings, Album also includes one oil painting. Monteith’s work consists of a wide variety of imagery related to the idea of the ‘snapshot’. Although these works are frequently photographically derived, each image is transcribed by hand – allowing for the possibility of distortion to enter into the process of translation.

Often finding herself an ‘accidental’ traveler, Monteith is interested in capturing the sense of continual motion, altering/mutating situations and activities which everyday life thrusts upon her. Sometimes this sense of constant change can be unnerving or disorientating – think of the possibility of driving a car at high speed and being capable of taking in the detail of all that you pass by – impossible even as a passenger.

This exhibition, Monteith’s 4th solo show, revels in those moments of life which are easily forgotten or that pass by unnoticed. From a complex and highly coloured palette, an array of images emerges – cars on the highway or people driving cars, a person struggling with crutches in front of a fruit shop, signage in general, a soldier, an intense 1970’s baby, a dog – the domesticated pet with a person reduced to an insignificant pare of boots in the background, shop fronts – places to hire videos or buy an alcoholic beverage – escape/travel in your mind rather than physically.