Another one bites the dust. The much loved and highly energetic artist run gallery Pelt is to close its doors after its application for funding from the Australia Council was knocked back. The gallery has one last exhibition opening tonight [see below] and so we took the opportunity to ask Caleb K about the gallery’s history.

How did Pelt come about and what’s its connection to impermanent?

CK: impermanent.audio is a project that i initiated with Imperial Slacks late in 2000. Since then impermanent.audio has been listening closely to the sound world that exists between music and art. I curated a mini-festival at Performance Space entitled i.audio, which combined the exhibition space and theatre. It was clear from the strange situation of people sitting in total silence listening to new video works by Andrew Gadow, Sam Smith, Ivan Lisyak, Peter Newman and Jon Hunter – at an opening – that something new was starting to happen in Sydney. It felt like a bunch of artists where driving video with sound rather than image with a sound track. To make a long story short, I saw a need to continue the focus of sound into a regular sound oriented gallery. A space where there was not only a data projector but a good solid PA, something an artist is unlikely to have or could not afford to hire for the duration of an exhibition. This is not common in Sydney, it is becoming common to have multiple projectors and a shitty home stereo. this is fine if the work is made for home stereo sound, not ok if the sound needs bigger, fuller playback.

Who was involved in the gallery and who helped to get it started?

CK: The gallery is run by peter blamey, william noble and myself. The gallery was instigated by myself with impermanernt.audio funding from the Ozco’s new media board. peter blamey had been doing the sound production for impermanent.audio and has been a great supporter of the project from the start and william had taken over from peter as the events sound guy. there is also a direct connection to UWS as I lecture there, peter is a doctoral candidate and william is a hons student.

What made Pelt different to existing ARIs?

CK: Pelt is completely different to any ARI running in Australia. In fact other than major galleries such as ACMI and Artspace no other media arts space currently exists. in addition to providing an exhibition space we also run sound events. impermanent.audio as well as independent sound has regularly occurred here including indie pop, noise, “new music”, improv and dance.

How long has it run for?

CK: The project PELT has ended up being one full year

How did you find managing the week to week running of the gallery and the events?

CK: The three of us are all friends and for myself i found the running of the space totally fun. It’s an enjoyable thing.

Pelt managed to run a very high quality program of shows – how would you rate the quality of proposals that were put forth for consideration?

CK: Maybe because of the duration, maybe because of the theme, maybe because I have been curating in Australia for 7 years, but the standard of exhibition in the space has been significant. We have way more proposals that we would have been happy to show than was available. the scene is crying out for this type of work and the standards in the area are really high. We really didn’t have to take a single show that we were not excited about. we had 22 exhibitions in the year and had many more planned before realising we would not be able to continue.

Why is the gallery closing?

CK: The gallery is closing as we did not receive funding from the OZCO in the ARI round nor the last New Media round. The timing was really bad with regards to the NSW ministry and as such we have no money to continue.

Is there any way you could see it continuing without funding support?

CK: In the current state we simply could not afford to pay the rent as an ARI without funding. The cost to rent the space for an exhibition would be out of the reach of most.

Overall, how would you describe the existing ARI scene in Sydney – are their enough of them or too few? Would you say there was enough diversity in the ARIs?

CK: It seems to me that the ARI scene in Sydney is over, its finished, we all need to move to Melbourne and jump on their amazingly strong situation down there. It is too expensive and there are simply too few spaces that survive here. I still cannot get over the last round ARI round from the Ozco. Sydney got half the grants of Melbourne (Melbourne spaces recieved 8), three spaces in melb had their grants topped up (one had theirs doubled from the max). In Sydney 2 of the 4 ARI grants were for projects without spaces (ie without 30000 a year rent). this is in a time when the galleries here are falling over themselves to close. What were they thinking!

Any words of advice for someone who might be considering starting a gallery?

CK: Just to do it your way 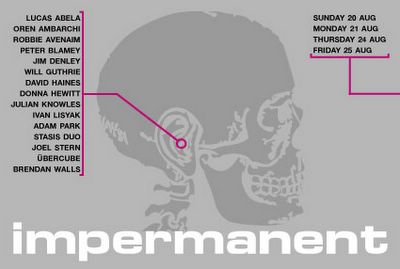 Camera Notes is an exhibition of selected photographs taken by Mr Snow for the impermanent.audio archive. Since impermanent.audio’s inception in 2000, Snow has been a regular fixture at the long running event and these images represent a major section of the Australian and international experimental music scene. Snow has a unique visual take on the purely audio performances. Images of musicians, spaces (including Slacks, Frequency Lab and Pelt) and audiences become a visual recording of the live audio performances and events.

Mr. Snow is an artist and artists’ technician. His current projects include deep space sculpture, synthetic victorian portraiture, telephone poetry and aeronautical lace. His works are not collected, collectable, nor exhibited. He graduated a long time ago from Sydney College of the Arts and lives and works online .

This will be PELT’s final opening, come and celebrate.

The show coincides with the last impermanent.audio events.

Why A Mountain: An Interview with Peter Daverington