While sprucing up The Art Life with a host of new links we recently received an email from Hugh Symonds letting us know about his handsome web presence. He uses his mobile phone camera to take shots which he posts to his site without any digital manipulation in between. We are always looking for new links to Australian artist web sites. You can send us your URL to our super exclusive Hotmail address posted at right. 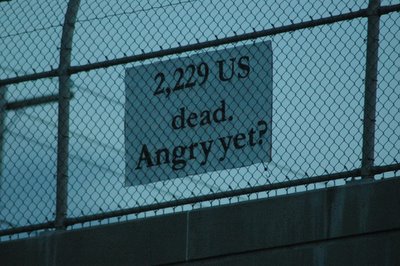 But this being the interweb we’re not constrained by national borders [unless those borders happen to be Chinese of course, thanks Google] so we have decided for 2006 to bring back what was a feature of The Art Life when we first started in 2004 – a hand picked selection of international artist sites, blogs and more general web sites for your time-wasting enjoyment. The section is ingeniously called Sites and lists a half dozen or so recently perused web sites. Among our recent additions are some art collaborative projects. Freeway Blogger is a fantastic site that documents the activities of US anti-war activists who use roadside signs to get their messages to speeding motorists. Our favourite: OSAMA BIN FORGOTTEN. 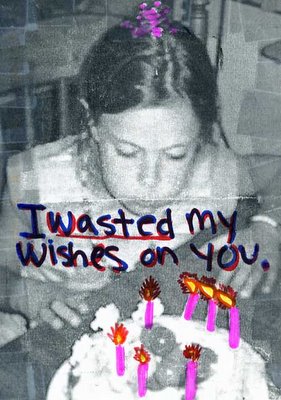 Another US site is the home of Wooster Collective’s ongoing ephemeral art projects documentation. Not to be confused with the Wooster Group [theatre types, former home base of Willem Dafoe and the late Spalding Grey], the Wooster Collective says its site is “dedicated to showcasing and celebrating ephemeral art placed on streets in cities around the world” and takes contributions from readers around the world. The startling Post Secret receives snail mail post cards from people who want to get a secret off their chests. Most of it is banal – as you might expect – but other secrets are deeply odd: “I wish I was Asian”. Yikes. In a similar ongoing project, the now veteran site Exploding Dog artist Sam Brown invites readers to send him a one line email which, if the mood takes him, he turns into a drawing. The difference between this and a thousand other sites is that it has been going for years and the drawings are good.

Other additions to our links include the nicely titled Bad Bad Art blog, which lists crimes against the English language by art writers, academics and others trying to explain – for example – why a bar of soap allegedly made from Italian Prime Minister Silvio Berlusconi‘s fat is a good thing. We have become so inured to this kind of writing that we almost took it seriously. A completely pointless web site but which is nonetheless very beautiful is Camera Toss, an ongoing group blog dedicated to the art of throwing your camera in the air and recording the results.

A different kind of pointless is the blog
dedicated to Tony Johansen’s legal challenge against the awarding of the 2004 Archibald Prize to Craig Ruddy. We thought the challenge must have died in the arse since nothing had been heard of it since early 2005, but no, the team behind the challenge are eagerly looking forward to their days in court, scheduled for the 29th and 30th of May 2006. Johansen himself surfed into The Art Life to leave a comment on a story we did more than a year ago and left the blog address, so we’ve included it here for future reference. We also discovered that Johansen has his own web site, so if you want to see what the man who would be king does in his studio, check it out.