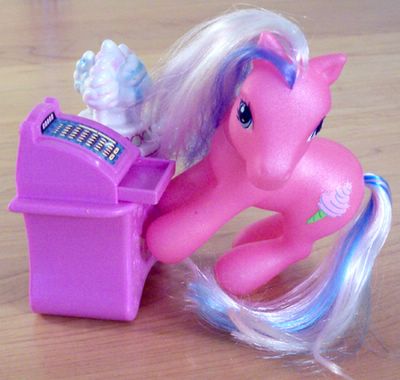 The work of John Mallett explores the liminality of personae and the pliability and instability of socially constructed systems of visuality that reinforce such a liminality. Working in the medium of DVD, installation and still images, Mallett’s work seeks to question the authority of state-created systems of culturally framed communication methodologies while mobilizing a range of fictions to undermine just such an authority. Using parody, eroticism and notions of abjection, Mallett’s video works re-perform classic comedy tropes in an attempt to reveal the hidden culturally specific messages in classic ‘girls only’ cartoons such as My Little Pony, bringing an undeniably “masculine” yet openly “feminine” take on the horse. In the work My Little P-ness Mallett’s video reveals the socially and culturally framed delivery of gender specific messages targeted at children while subverting just such an authority. Using confronting nudity, duration and debasement, Mallett’s work questions the notion of “pony-ness” and its relation to contemporary gender politics. Performances at 2pm daily. 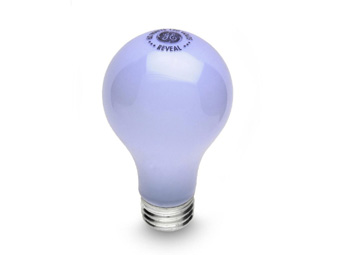 The figure of the light bulb is a potent theme in our cultural remembering and has recurred throughout art, film and literature, for example, in the paintings of Gerhard Osram and in films such as Lights Out by Peter Mirabella. In his latest series of 12 lambda prints, Hedley Grange explores this theme photographically, investigating the ironical interface of the light emitting device and the photographs of various bulbs, some working, others not, in a variety of wattages – from the dull 40 watt pearl through to the industrial 120 watt clear – all set against neutral and opaque surfaces. Referencing recent works such as Martin Creed’s celebrated On/Off, Grange accompanies the new sequence of stills with a limited edition DVD of the work Replacing The Globe in which, over a duration of some minutes, the artist painstakingly paints a globe of the Earth on to a light globe, then inserts the bulb into a socket. The work plays on notions of safety, suitability [in the context of lighting] and insertion. Commenting on the work Grange says, “For your added safety, every light globe has two in-built safety fuses – so always switch off the electricity before removing and replacing light globes.” 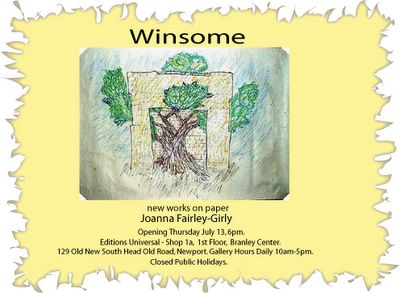 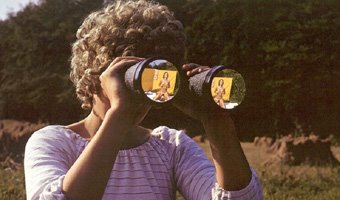 As part of Galleries Feldspar’s ongoing celebration of their 26 years of exhibitions, Angela and Teddy Feldspar have great pleasure in inviting you to the preview of Dirty Birds, a new exhibition by Salo Viczxnecz. In a series of 12 new large scale lambda prints, Viczxnecz investigates notions of gender signification while playing games of free association that trade on the stereotypical motifs of women’s erotica, referencing the intrusion and manipulations of contemporary media tropes. Subconscious hybrid notions of cultural non-identity emerge in the stereotypical motifs of “lesbian” erotica manufactured for a primarily male audience and are subverted and replayed in a series of images that constitute a playful narrative of “camping” while simultaneously creating a meta-narrative of surprise and intrusion, release and regret. The artist’s masquerade literally holds up an ironic critique of subjectivity tortured by space in a masochistic desire for integration. In Making Dirty Birds, an accompanying limited edition DVD also screening at the exhibition, Viczxnecz apparently explains the “making” of the “images”, yet inserts a new story of familial pressure, sales anxiety and aborted desire which again, and ironically, is exposed as another fictive layer in an exegesis of hypermodal metafictional discursivity. 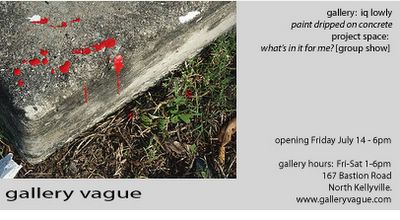 Private View: Join Us for a Preview of New Works in Oils
By
Craig Johnson-Newman AM 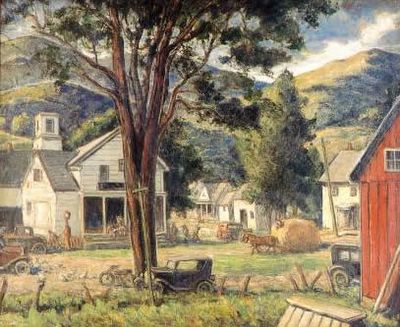 Craig johnson-Newman, Miniature Car, 2006.
Oil on board, 80x120cms.
A selection of new works in oils by Craig Johnson-Newman AM, teacher, painter, poet and author, many painted over the last eighteen months since his last sell out show with Peate Street Gallery, others recently acquired from select secondary market sales, now offered to private collectors for the first time. Johnson-Newman is a highly respected artist, his work finding its way into many prestigious collections including the Bosworth Childers, Mellancamp & Partners collection, the corporate holdings of the Australian Wheat Board and the collection of the Department of Foreign Affairs and Trade Tokyo Trade Mission. Containing many of the themes of his best loved work, this exhibition features scenes of fecund pastoral landscapes, miniature cars and horses, many of these motifs combined in the same picture. Writing on his work in the Australian Reference Dictionary of Art & Artists, Sarah Woodley described the artist’s work as “competent” and “popular.” Accompanying this exhibition will be the release My Slim Volume of Verse, a book of the artist’s poetry, and sketches of birds seen on his property, with a forward by poetess Professor Glenda O’Riley, of the University of the Central Coast.

-language; acting upon and altering body/consciousness 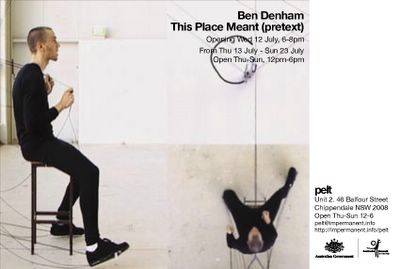 This Place Meant (pretext), is a collection of video works which have emerged out of an interest in the body as the catalyst for shifts in language and meaning.

The exhibition focuses on the work “Pulling Strings; instructional alphabet a-z” which maps out an alphabet of bodily movements, as both arms and legs are used to write by pulling and releasing strings.

Whilst the “instructional alphabet” is a set of movements which are necessary before a particular body can create words in the written form, the “Viewing Aspect” pieces produce a set of meanings generated by words whose repetition reveals something of the transformational nature of language in the spoken form. The work is a series of three pieces that involve a mantra-like repetition of certain phrases implicit in the relationship between the artist and the viewer.

Ben Denham completed his undergraduate studies at the University of Western Sydney in 2002. In that same year he received the Helen Lempriere Travelling Art Prize which, in 2003 and 2004, saw him present work in Mexico, Florida in the United States and also in Singapore. Ben is currently completing an MA at the University of Western Sydney. This is his first solo show in Sydney.