Say No To Fame & Fortune

SquatFest is on again! For the 6th year running!

SquatFest happens every year at the same date and time as TropFest. Why? Because there are alternatives to the predictable short-quirky-character-based-joke-at-the-end Tropfest fodder!

While the hopeful entrants for TropFest are fretting about whether they’ll get the chance to move up a rung in the Hollywood Sweatshop, artists and activists from ’round Australia are living it up, projecting films and videos in an inspiring squatted venue.

The festival, which began at the infamous Broadway Squats, is now in its 6th year and each time it features a different reclaimed space in Sydney. 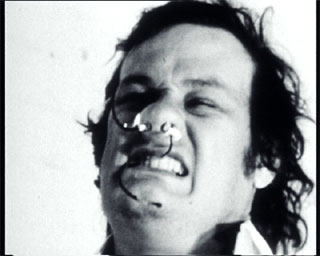 Punters are encouraged to get into the spirit with a dress up theme, this year it’s “Bubble, Bubble, Toil and Trouble”. And, yes, there’s even a SquatFest trophy –lovingly made by a guest artist- in 2006 it will be the work of explosive artist Simon Cavenough. The guest celebrity this year is the notoriously controversial artist, Mike Parr. We will be screening a couple of Mike’s short films, and he will present our custom-made trophy to this year’s winner.

WHERE? Top secret location revealed on the day! Stay tuned to www.squatspace.com or simply sms ‘squat’ to 0400 881144 on the 26th Feb to find out! (Cost of a normal text message).[many thanks to On The Fly for providing this service!]

WHY? By now you must know the slogan (all together now): “Because TropFest sux Corporate Cock!

Read & Blue Paintings in Acrylics, No Thanks…

A Whole Lot of Art All At Once