Imagine the scene if you can. You’re at the Art Gallery of NSW, or the Museum of Contemporary Art, or perhaps at the “National” Gallery of Victoria, for an opening party. It’s the standard fair: art world people, drinks, canapés, speeches. After a couple of hours the doors are thrown open. The public streams into the gallery, all smiles, many of them extended Islander families, and head towards a stage area en mass. Reggae superstar O-shen comes on and the place goes crazy – the band kicks in, dreads flying – it’s like the second coming of Bob Marley. Not only is the band great, the crowd totally into it, but so are the art people – and even crazier – all the galleries are still open, drunk people wandering around looking at art, museum guards smiling, no doubt mentally totting up the overtime. A grand dream? Too many of Brisbane’s infamous trumpet reefers? No – this really was the opening party of the 6th Asia Pacific Triennial. All the usual art world talk of “inclusivity” and “reaching out to the community” usually amount to very little. This time GOMA and the APT made the egalitarian gesture into something real. This is how all major gallery openings should roll. [Note to the 2010 Biennale of Sydney – maybe think of combining with All Tomorrow’s Parties? You can only hope to match the fun of the APT.] 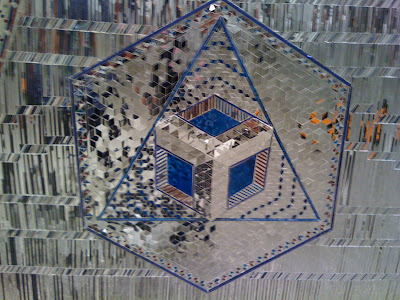 The APT exhibition proper opened to the public on Saturday morning. It made recording some of our interviews tricky. While we were in the middle of interviewing New Zealander artist Robin White and her Fijian collaborators Leba Toki and Bale Jione, people gathered around, listened quietly, walked into shot, stood in front of the camera, and took photos. The end of the interview was a write off, the sound obliterated by another NZ artist, Rohan Wealleans, screaming from the adjacent gallery. It was a performance involving a canoe. Wealleans performance was described to us by some onlookers as “showbizy” and “like a 1st year art student’s idea of a performance”. We missed it ourselves but can attest to its volume. We cannot attest to the exact identity of the performer. It was said that Wealleans, who we’d wanted to interview for our APT special, was too sick to travel to Australia and had sent his identical twin brother in his place. Yeah right. We’ve seen Adaptation and we know how that works.

Chinese artist Chen Quilin’s family home was demolished to make way for the Three Gorges Dam. All the people from her home town have been scattered to other cities, relocated, lost in the greater Chinese population. Many other towns and villages met the same fate and the sadness of losing a family home to the waters was compounded by the fact that many of the former citizens were obliged to destroy their houses with little more than a hammer. One of Chen’s pieces for GOMA is a complete reconstruction of a house from a flooded area – in fact, the house comes from a village that neighboured Chen’s, a place where she had played as a child. Accompanying the installation is a video that documents in dream-like sequences the hopes of the relocated villagers. It’s poetic, moving and rather beautiful. Talking to Chen through an interpreter it was humbling to discover an artist whose reasons for making her art were so clear, forthright and deeply emotional. Many of the artists we have spoken to such as Monir Shahroudy Farmanfarmian, White, Toki and Jione – and many others – talk about their work in a manner that is both direct and uncomplicated. 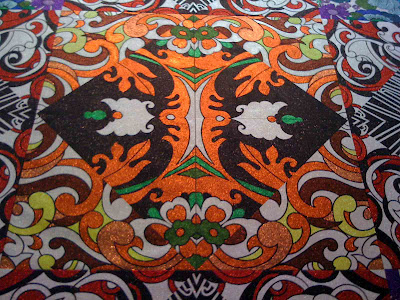 What is the name of the director of the Gallery of Modern Art? His name is Tony Ellwood. Tony Ellwood. As in Jake and Ellwood, we’re on a mission from God etc. TONY ELLWOOD. Thank you.