Friend of the world 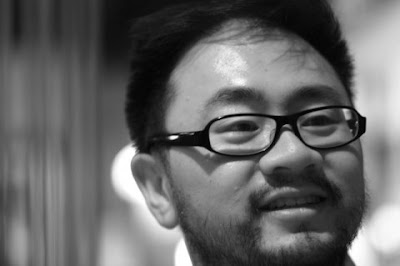 Arteri|Art + Culture|Malaysia have published an obituary for our friend Emil Goh, whose recent sad passing was recorded here on the 9th of September:

Emil Goh (b. 1966, Malaysia) passed away last Monday 7 September at his apartment in Seoul.

Emil was an artist, designer, traveller, foodie, people person. We cannot lay claim to him in earnest as our fellow countryman – Emil really belonged to a broader sort of society, a ‘man of the world’ in a very today sense. Yet there was certainly the Malaysian in him, who loved to eat good food, banter, and kaypoh in a positive and creative way. Most of us in Malaysia will only know of Emil through his work, which has been shown intermittently here in curated shows at the Balai Seni Lukis Negara (National Art Gallery) and elsewhere. Some of us know him as the son of the painter Sylvia Lee Goh, who would be touched that those in the art world here, especially artists, have voiced real sadness and shock at the news of his passing.

Emil made an impact wherever he put down his hat. He went to Australia in 1985, studying psychology (Newcastle University) and then Fine Art (Sydney University), developing his practice across different media, particularly video and photography, while becoming a key figure in the contemporary art community down under. He was one of the co-founders of the Asian-Australian Artists Association who set up the groundbreaking Gallery 4A in Sydney. He also spent time in London in the late 90s, studying for his Masters at Goldsmiths College, which is when I met him for the first time. In 2003 he took up a residency at Ssamzie Space in Seoul and ended up staying on. It didn’t take long for Emil to ‘take root’ in any of these communities, where he made literally hundreds of friends. Emil was a super-connector of people and ideas with an unstinting enthusiasm for contemporary art and urban culture. For someone looking in, Emil’s life seemed to be very much about making things happen, and his work about watching things happen, seeing them come together.

Emil took part in over 70 exhibitions and projects across Australia, Europe and Asia and his work has been pretty widely written up in international magazines like Flash Art, Art in America, Theme, Wired Online, and Art Asia Pacific. Emil’s work doesn’t slap you in the face or make overt statements, but it finds the pulse in the life of things taken for granted, particularly in the urban everyday, appealing to the personal without taking it hostage.

He got to the very heart of the media he used. His videos harness our fascination for the moving image and film, taking the simple foundations of time and focus. He traced the passing of a day, his camera simply panning slowly through friends’ apartments in London, Hong Kong and Seoul (Between – three versions 2000-2005), he re-spliced a whole movie into three jumbled parts (Remake (Ring),2004), and raced us through the trailer to ‘Speed’ in quadruple time. He made mini-films of a cellphone ringing, feet walking along a stairmaster, a cyclist coming in and out of traffic. His photographs were just about capturing that moment with a camera, whether high-rise buildings lit like lanterns in the night, a working woman sitting asleep in an underground train, or snapshots of couples posing wearing identical clothes (couplelook series, 2004).