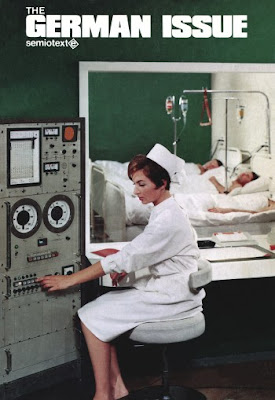 Nina Power:?One of the most important media for the Autonomia was radio. The obvious contemporary comparison is the Internet; it offers the possibility of putting out material quickly, and of constructing para- or non-academic discussions, as you did with Semiotext(e) at a time when French theory was still mostly untranslated. Perhaps there is less room for the kind of fetish items that the early Semiotext(e) books became. Now there are blogs, online books, and so on. How do you feel about this development?

Sylvère Lotringer: It certainly offers an enormous range of possibilities that didn’t exist before, but increased dissemination and accessibility doesn’t replace hard theory. Actually the introduction of the electronic media in the late 1970s marked the end of French theory in France. Philosophers of this great generation were replaced by publicists, like Bernard-Henri Lévy. Theory is not synonymous with blogging, nor is multi-tasking with thinking. The books that we publish are a long-time intellectual commitment on their authors’ part and we have hardly scratched the surface. We are interested in everything that helps us diagnose the future, where we are going, what can be done, and that is far from clear at this point. We are presently moving from a humanistic space to a more global and ecological horizon. So we need an ever wider range of theories, not less, and the re-introduction of Italian social thinkers as well as Peter Sloterdijk’s amazing philosophical extrapolations are part of this project. Radio certainly had its time, but it is no less interesting for that. Actually it has been experiencing a revival. Technological advance isn’t everything. The Autonomists’ radios were not just radio, they were part of a total – not a global – environment, and they could mobilize the population whenever the police tried to raid them. These were political groups embedded in a local community, they knew who they were talking to. Can these communities be extended on a wider scale? Not in the same way. The Internet seemed to be the answer at the time it was introduced, but it has quickly become a new form of mental pollution. The CIA, apparently, is now working on a ‘gated’ equivalent that will keep hackers and other rogue idealists off-limits. The Internet certainly allows for a direct connection between people, but it still depends on long-time memory and a central organ. It assigns individuals a place that pre-exists them and abstracts them from their own environment. This is just the opposite of the idea of ‘general intelligence’ that Antonio Negri and Paolo Virno have extracted from Marx, which implies social creativity and public cooperation. Like other recent technological inventions, the Internet runs the risk of reproducing itself at the expense of the very sociability it was supposed to provide. It expands our world and reduces it to nothing, enforcing a culture of non-stop communication that is taking its toll on human temporality and its capacity to connect to the outside…”

Intelligence Agency: Theorist Sylvère Lotringer talks to Nina Power about art and the market, the failings of capitalism and how radical thinking can help us survive ‘the system’ – from Frieze.