Entering the TARDIS – an acronym for Time And Relative Dimension(s) In Space , I go walkabout within the monolith that contains The Meaning of Life. I race across time eating Mad Max’s dust as he tears across the Australian desert, his speed revealed in the same way as Major Steve Austin’s was in The Six Million Dollar Man. The bionic Major could run so fast that in the 1970s the only way to reveal the pace of his motion was to show it slowly, a paradox that still bemuses me today. The TARDIS shudders as we leap the 30 years into the future and land at the 2009 Australian Venice Biennale pavilion where we meet Dr Blair French, who is describing in high definition a “major” exhibition that has not yet happened.

A key scene in this film is when a “helmeted figure in black emerges from inside the moving car through the side window, slowly mounts the roof… Every nuance of his movement is emphasised in slow-motion, transforming a potentially dangerous act into “ a formal study in physical virtuosity…” Outside the pavilion are the stage props, Mad Max’s replica car. This ‘Interceptor’ embedded itself in my memory when the film was shot in the bleak town of Clunes where I spent my childhood holidays. Like my 1970s memories, a motorbike has crashed into the wall of the pavilion, whilst back inside, the projections “on either side of a suspended screen…effectively links both levels of the Pavilion…In this context no single work dominates any other, but located as it is at the centre of the Pavilion…Interceptor Surf Sequence will without doubt linger in one’s memory.” 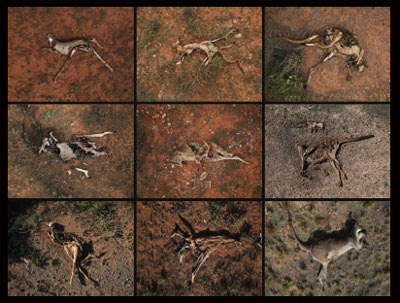 When Australians fly to Venice, we, like Doctor Who, become natural time-travelers for we are always going back in time. Art mediums that are time-based can also manipulate it directionally and, being digital, it means communication can be globally instantaneous. This, however, does not explain the efficiency of the Australia Council for the Arts, who have already published the catalogue essays, acknowledgements and descriptions of site-specific installations six weeks before the Venice Biennale has actually opened. It creates a challenge. Can one review an exhibition before it exists? So step into my TARDIS and let’s be “dimensionally transcendental.”. Before we leave it might be worth considering the questions that one should ask the good doctor: can a memory linger, without doubt, before that memory has been experienced in context?

Doctor Who visited Venice where, along with an ‘amphibian gondola’ he “…met a curator obsessed with his art collection and your typical mad cult leader.” Venice is a city that can be easily stereotyped, as Monty Python did in the 1979 film in which John Cleese delivered that memorable line “…not more of those fucking gondolas.“ Australia is a country that can also be cliché-ridden, with imagery being used to simplify the complexity of a continent – stereotypical images that might be viewed as coming from “a long time ago on a Sunday far, far away'” and not from the sophisticated cosmopolitan postcolonial Australia of today.

Doug Hall, the Australian commissioner for this year’s Biennale pavilion, emphasizes that Venice is not about cliché, whilst telling us he is aware of ‘cultural diplomacy’. He believes that Australia’s presence in Venice is “…about international representation and not…banal or twee or heavy-handed political gestures.” According to Hall, there were three elements to his role: “…the selection procedure, then fund raising – and that’s about people with interest, influence and money, the ricochet effect beyond the immediate goal. Then there’s the advocacy of Venice: making Australia look very, very good.” One might ask how much the second element directly impacted on the first and third?

Shaun Gladwell was selected to represent Australia on the back of his success at the 2007 Biennale, where a video work was included in the Robert Storr exhibition, Think with the senses – feel with the mind. Storm sequence (2000) was commented upon by Richard Dorment, art critic for the London Telegraph, who stated, “If I had to pick the single young artist in this Biennale destined for future greatness, it would be the Australian Shaun Gladwell…” Dorment gave no reason for this prediction; however, soon after Venice, the DVD ricocheted into auction and sold for a “blockbuster” $84,000Aud.

Dorment is not just an art critic, he is an important cultural commentator who writes for the New York Review of Books. He is a well-read cultural critic who in 2007 heavily criticized the British Biennale representative for being a “phony.” Is Tracey Emin a phony reality-TV artist as Dorment suggested? If she is, Tracey has built a career on this negative criticism that seems to paradoxically add to her ‘success’ as an artist – some might think she welcomes it. Strangely, Emin shares Dorment’s view about Gladwell because as a curator she selected him for her room in last year’s Royal Academy summer exhibition. It begs the question: can you be a phony reality-TV artist at the same time as being a cultural visionary?

Others also knew that Gladwell was destined for great things. “In 2006 he was awarded a two-year Fellowship from the Australia Council for the Arts Visual Arts Board to research and produce five major works for several international biennales and commissions…” With the help of the Australia Council, MADDESTMAXIMVS was “begun in earnest in 2007…” a year before he was selected to exhibit this work at Venice. Four other artists were also selected to show in the other space, the Ludoteca. They were Vernon Ah Kee, Ken Yonetani, Claire Healy and Sean Cordeiro.

If Doctor Who had been in the room of vigorous democratic debate, he would have heard some other ideas put forward by Doug Hall. In February 2008, upon being appointed by the Australia Council as Commissioner for Venice, Hall said that he wanted something that “…didn’t mark Australia as derivative..,” something “…genuinely different…that I think makes it peculiarly Australian.”

He was not referring to an actor ‘surfing’ on top of Priscilla, the Queen of the Desert, but his admiration for the indigenous ‘Western Desert’ painting movement. However, he was very quick to point out that “…no decision has been made, and a program of virtuous cultural democracy has yet to tu[r]n its course.” Hall was obviously out-voted, for Western Desert painting was not selected for Venice, unless you regard Gladwell’s images of the landscape around Broken Hill, with its road-kill kangaroos, blue skies and red desert, looking like a typical Aussie beer commercial, as the archetypal, stereotypical, clichéd and barren western desert? I wake in fright in “…the Pavilion that is itself treated by the artist as a form of sculptural vessel, conveying a coherent yet vigorously associative expression of a place a world removed from the Giardini.” 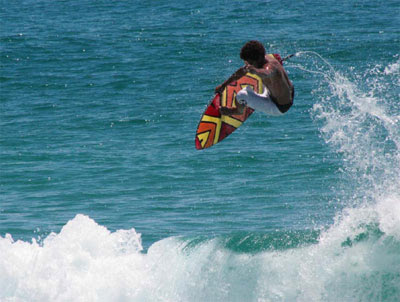 All that is missing from Gladwell’s imagery is a large monolith and some token Aboriginals with a spear and shield. Vernon Ah Kee rises from the pages of The Australian to create an interesting debate with his ‘Commissioner’: “The problem with art produced and retailed through art centres – if you want to call it art – is that the artists don’t understand their role … I’m talking about the narrow definition of Aboriginal art that the people in remote communities live up to, to their own detriment.” The article suggested that Ah Kee believes “…it’s important for Aboriginal artists to understand that art in Western culture is a commodity, and the art market an industry that runs like a well-oiled machine. The artist’s role is to work within that system to create exceptional art.” “Ah Kee will be showing a video in which an Aboriginal surfer appears like a new-age warrior, skimming the waves on a board transformed into a weapon, with the bright markings of a shield from the rainforest region of north Queensland.”

Sitting in the catalogue between Ah Kee, an aboriginal artist with Chinese heritage, and Ken Yonetani, an Australian who recently immigrated from Japan, is Felicity Fenner‘s essay, where she tells us “…a politically-led reassessment of Australia’s place in the world has resulted in a surge of interest…in Aboriginal art, and a new Australian preparedness to engage with the cultures of neighbouring Asian and Pacific nations.” What was Doug Hall saying about cultural diplomacy and heavy-handed political messages? With the selection of work that has “… a ‘brand personality’ that has characteristically Australian qualities of being down-to-earth and accessible,” all we need is an environmental message about the Great Barrier Reef, and Ken Yonetani delivers it. 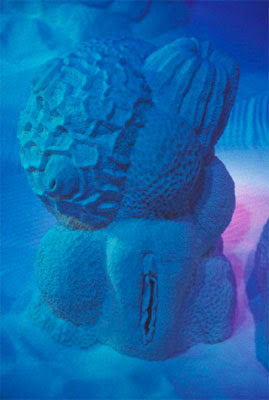 “Sweet Barrier Reef is an installation about coral bleaching, made from white sugar and inspired by the form of a Japanese Zen garden. A symbol of colonisation and modernisation, sugar also represents human desire and consumption, both of which fuel the industries impacting disastrously on fragile ocean environments.”

This large, dainty and pretty-looking sculpture is 12 metres long, so to remind you to look hard at the detail, a close-up photo in the catalogue reveals the obvious genitalia references. I can only assume that the work matches the recently introduced genitalia protocols laid down by the Australia Council. Before I am bleached upon by an exquisite-looking phallic sugar reef I travel through the website of Imperial Slacks, where I see that Sean Cordeiro and Clare Healey participated in an artist-run initiative with Gladwell. Their work, Life span, is a:

“…site-specific installation…” that “…gathers the world’s dreams, fears and desires into a neatly ordered stack… There are 195,774 videos in this towering monolith…Collectively the content of this VHS monument ruminates on the human condition, on the meaning of life and on mortality…The juxtaposition between popular videos and the church setting serves to heighten the significance both of the work and of the church…an apt metaphor not only for society’s contrived packaging of experience and emotion, but also for the ultimate transience of life itself.”

I find my camouflaged TARDIS in the church, underneath this mausoleum of Video Art. I enter and travel along the Meaning of life, picking up one last mint before buying myself a replica ‘interceptor’ from www.madmaxcars.com. I drive recklessly to the British pavilion “a few years from now…” where I am told another Time Lord, Tracey Emin, who is really a Dalek, has refused to give back the space beyond Thunderdome, whilst holding John Cleese captive in a gondola. I tell her that recording one’s experience of a site-specific installation, before it is installed, is a “contrived packaging of experience and emotion” that becomes a monolithic visual merchandising display for a curatorial little shop of horrors. Tracey turns to me and says in that piercing but well-oiled mechanical scream – “Exterminate, exterminate, exterminate!”

This an edited version of an article that appeared in Circa Art Magazine.