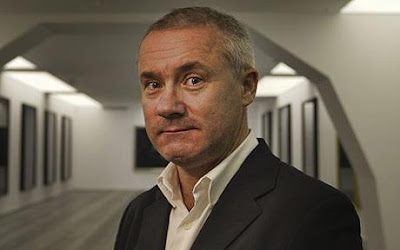 “Cartrain, a 17-year-old graffiti artist embroiled in a feud with Damien Hirst, has been arrested after stealing pencils from the millionaire artist’s latest installation

“Last year Cartrain was ordered by the Design and Artists Copyright Society to hand over collages based on Hirst’s famous diamond-encrusted skull, For the Love of God, and pay the £200 in profits he made.

“In an act of revenge, Cartrain visited Hirst’s installation Pharmacy in July, which was being shown as part of Tate Britain’s Classified exhibition until it closed last month, and removed a few of the rare “Faber Castell dated 1990 Mongol 482 Series” pencils.

“Cartrain then made a mock “wanted” posted that read: “For the safe return of Damien Hirst’s pencilers I would like my artworks back that DACS and Hirst took off me in November. It’s not a large demand… Hirst has until the end of this month to resolve this or on 31 of July the pencils will be sharpened. He has been warned.”

“But the stunt backfired when the antiques squad from the Metropolitan Police arrested the artist, informing him the pencils were worth £500,000 as part of the overall installation which was valued at £10 million…”

A Metaphor For Us All