The Art Life: You must be very pleased to have won the inaugural B.E.S.T. Contemporary Art Prize For Painting? Were you nervous on the night?

Tom Polo: It was a complete shock! I was not expecting it at all – in fact, I wasn’t even going to turn up to the gallery that night as I never got ‘the phone call’ people apparently get when they win something. When the judges announced my name I was lost for words. There were gasps from the crowd. 2009 B.E.S.T. Winner
Tom Polo, Continuous One Liners (Young People Today),2009.
Acrylic on crockery,23 cm (diameter)
Photography: Garry Trinh.
TAL: Why did you decide to stage a fake competition? Can you explain something of the background to this project?

TP: The 2009 B.E.S.T. (Because Everybody Still Tries) Contemporary Art Prize For Painting was a project that I had been thinking about since the end of 2007. I decided to stage this art prize as a way of discussing ideas of competition in contemporary society as I am interested in what it means to be a winner – and by association, what it means to be a loser. The art prize ran like the many art prizes that exist – with entry forms, press releases, advertisements and of course, an exhibition of finalists works at the end with an announcement and awarding of the big prize. One exception, as stated in the entry form, was that the only eligible entrants were artists born on the 1st February, 1985 and named as ‘Tommaso Polo’ on their birth certificates. This factor meant that anybody else who entered received a stock-standard rejection letter from the B.E.S.T prize panel. My rationale behind this part of the project was that sometimes in order to be successful, or rather, be considered successful, people go to extreme lengths to exclude every other contender. It is also a little bit of a healthy “stick it to the man” on behalf of artists to art prizes and institutions. They dictate who the ‘the winner’ is, which can equate to who is important and what is of value. There is often a push and pull effect with prizes that determine who artists are eligible to be compared to, who is in who’s league…

TAL: Was there a particular selection process for the work that you included in the show? Was it made for the exhibition or were you looking for examples of “competition art”?

TP: There’s a bit of both. I wanted to stage the exhibition so when the audience saw the work on the walls, there was both a sense of connection between individual paintings as well as the hazardous diversity that is seen in art prizes. For this reason I have hinted at the different things we have come to expect when we see these shows. There’s the large, fleshy portrait that’s often bigger than the rest or the minimal abstract work that no one can identify, to the still life, the found object and of course, the “my five year old could have done better” work. In the end though – beyond the art prize context – the show needed to stand as a solid group of paintings. 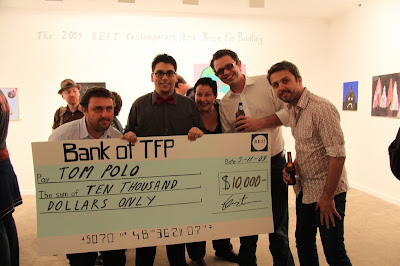 Tom Polo [second from left] with 2009 B.E.S.T. Judges – [l to r] Glenn “Gnarls” Barkley, Joan Ross, Vasili Kaliman & Daniel Mudie Cunningham. Photography: Sonia Uddin
TAL: You’ve been exploring this idea of “success” and “failure” in your work for awhile now – and you seem to be moving away from painting a little. Are you planning to do more of these performance style pieces?

TP: Exploring success and failure is important to me because they are two polar opposites that society inherently categorises things into. They are aligned with things being good and bad or positive and negative. I think this idea helps to make my work more approachable to an audience and not too difficult to read. I studied as a painter but I was often told – and it was only after art school that I saw it – that my work has always had a staged element – like sets for theatre – even if they were paintings hanging on a wall. In that respect, I would refer to what I do as painting/installation and I think there is a performative aspect that exists in there. Most recently, I’ve extended into photography and sculpture because they have been the most appropriate mediums for the ideas which I think is important to do as an artist. My interest in humour will aid my investigation into performance in my work and it is something I look forward to.

TAL: Could you talk a little about your use of text in your work – what is the need to write in a painting? What does it add?

TP: I made my first official text painting in the last few weeks of my fine arts degree when, after ruining a certain painting for the 10th time, I scrawled the words ‘I fucking hate overworking my paintings’. Even though text only became a large part of my practice in 2008 I had realised that there is a brutal honesty that can be conveyed in words – statements, quotes, slogans and colloquialisms. Compared to images of things, to me text also seems more direct and less blurred by interpretation and experience. I’m also quite fascinated with hand made signs – especially the really poorly made ones with the bad bubble writing that people put out the front of their homes to sell old cars or pool tables. There’s a nice sense of failure in them as to me, they defeat the purpose of what they’re supposed to be doing – enticing you into buying or seeing something! These are all elements seen in the works of artists such as David Shrigley and Jon Campbell, who I both really like. 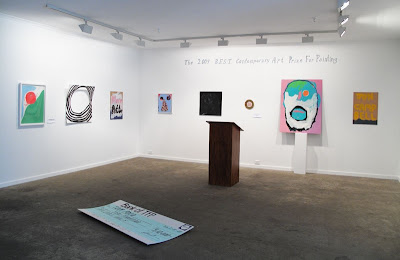 The 2009 B.E.S.T. Contemporary Art Prize For Painting
MOP Projects, Sydney. Photography: Garry Trinh
TAL: Do you anticipate a time when Tom Polo is too successful to make art about success?

TP: What is too successful? While I would describe my work as an extended act of self portraiture, its more a social reflection of ideas that everybody can relate to. So, I guess the answer is no, there will always be another mountain to climb!

TP: No idea, but I hear that guy Tom Pollo or Tim Paulo or whatever is doing good things…

The 2009 B.E.S.T. Contemporary Art Prize for Painting at MOP until November 22.