Our discussion of artists making movies and artists as the subject of movies [see below] prompted some readers to remind of us of two Australian artists who have directed feature films; Tracey Moffatt’s Bedeviled and Philip Brophy’s Bodymelt. Although these films could be considered natural extensions of both artist’s work rather than volte-face career turns such as David Salle and Julian Schnabel, they are indeed feature films made for cinema release (or straight to video oblivion in the case of Brophy). 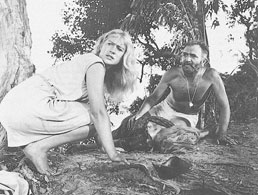 The 52nd Sydney Film Festival is hosting a world premiere screening of a restored version of Michael Powell’s Age of Consent, a film about a fictional artist based on a book by a real one.

Powell of course was the British director of such famed [and infamous] movies including The Red Shoes, The Life and Death of Colonel Blimp, Black Narcissus and Peeping Tom. It was the controversy that followed the release of Peeping Tom (considered by some at the time to be ‘evil’) that forced Powell to relocate to Australia where he made two films; that amazing time capsule of Sydney in the 60s called They’re A Weird Mob (1966) and three years later, Age of Consent (1969).

This latter film was based on a novel written by Norman Lindsay and features many of the hallmarks of that great sybarite artist – lots of nudity, languid lying about on tropical beaches, some fevered painting executed with grim determination by James Mason (done by Lindsay) and yet more nudity. As the Sydney Film Festival describes the plot, “Mason plays an ageing jaded artist who returns to his homeland to seek inspiration, he finds it in Cora, a nubile innocent played by a 20-something Helen Mirren.”

We have intense memories of seeing this film on TV in the early 1970s which, as far as we can recall, was uncut and featured so much unblushing cavorting that we became life long fans of Helen Mirren. Apparently, we were wrong, as the only extant version had the music by Peter Sculthorpe replaced and the nudity removed. The new print has every last second restored and the music put back in and the SFF has a

The critical reception of the film was tepid at best and although thought to be a sure fire hit, failed at the box office. More recent studies of Powell’s career find it difficult to find much good to say about it, the most generous being a summary of the director’s work by Adrian Danks at Senses of Cinema:

The two films that Powell made in Australia – They’re a Weird Mob (1966) (scripted by Pressburger under the pseudonym Richard Imrie) and Age of Consent – can either be read as diluted versions of Powell’s visionary cinema or as in keeping with the constantly adventurous, inquisitive and playful dimensions of the last 30 years of his career (they also revel in the humour that percolates throughout much of the director’s work). Though less ambitious aesthetically, these two films and those which follow, can be compared positively to the late work of the great Classical Hollywood masters such as Hawks, Ford and Hitchcock.”