An artfully programmed compliment to the Biennale is Custom Living, the new exhibition by Claire Healy and Sean Cordeiro at Gallery Barry Keldoulis. Unlike their previous GBK show which was mostly handsome photographic documentation of their recent projects, Custom Living is a series of sculptures which address the mutability of public and personal space in what the architecturally savvy like to call “the built environment” but which to everyone else is just life in general. Like their spectacular Cordial Home Project in which they completely dismantled a suburban house and packed its materials into a tight space within a gallery, Custom Living demonstrates the duo’s ability to take extremely complicated objects and devise ingenious storage solutions for them. 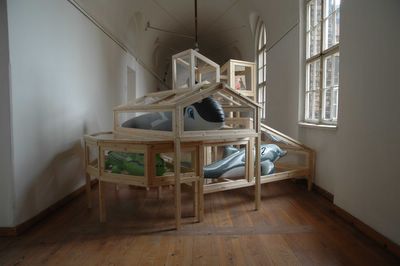 Perhaps taking the “ingenious storage solutions” concept to its logical conclusion, the pair are now working with Ikea shelving, which are incredibly attractive bits of laminated wood called Lack, and have sandwiched together variously themed paperbacks retrieved from German artist warehouses. How one thing should lead to the next is part of the artist’s charm. We were particularly taken with the series of quasi-religious texts given the Lack treatment. Elsewhere they have compacted cardboard under a folding picnic table and in another piece, rearranged all the artists belongings left in a Japanese studio. A complete reverse of their normal process is The Plastic Menagerie, a series of inflatable animals given a very formal wooden home. If there was ever a piece of art which could fit in a suitcase or be folded up, it would be these happy creatures.

Our visit to GBK was not, however, primarily motivated by the Healy and Cordeiro show. We saw the words “science fiction” and “CCTV” in a gallery press release and we were down there like a shot. Austrian artist Manu Luksch has a four monitor video installation called Faceless screening at GBK. Living and working in London, Luksch discovered that under UK law, anyone caught on tape by one of that country’s countless CCTV cameras has the right to request footage of themselves. Getting at the footage is hard work because although it is available the authorities resist requests, probably realising that if everyone asked for their footage, then the whole security apparatus that relies on the cameras would be useless. When you can actually get a hold of the footage everyone but the person [or persons] requesting the footage has their faces blocked out by black dots. Luksch hatched a plan to create a narrative video work by performing certain actions in locations covered by CCTV and then requesting the footage, editing it together and creating the finished work.

Faceless is possibly one of the best narrative video art pieces we’ve seen in a long time. The artist’s narrative is a winsome, low key affair that winds up in a high stepping dance number on the windswept forecourt of a London housing estate. Yet although its fictive space is somewhat wonky [set in 2030 the readouts on the screens clearly state it was shot in ’05], the work has an incredible presence because Luksch has used one system of image capture to create a work for which that system was clearly not intended. The warping of the security apparatus for the aesthetic and joyful intervention of the artist upsets the law-and-order imperative of CCTV, and her play with the time frame of the work and its images redeploy the various technical aspects of CCTV to the disposal of the artist. It is both a humorous and soft centered work that still manages to evoke the dread of so many low res images awash through he web and mainstream media. We were half expecting some bland, grey scene of a truck passing or a person entering a tube station to suddenly erupt in the staggered crimson frames of a terrorist explosion, yet the work resists the sensational for the everyday and becomes all the more miraculous because of it.