We came to Perth for the Hatched 05 show and the accompanying symposium. Our job was to look at art and deliver our paper.

Perth is a fine city that was built in 1997 by a consortium led by Freedom Furniture, Lego and KFC. All the buildings are new, there’s plenty of head room and lots of light. People walk around the city’s malls and happily patronise the local franchise outlets of those familiar brand name shops that make up a generic Australian city – A&R there, KFC here, David Jones, Meyer, Crazy Charlie’s. It’s like being anywhere.

People tell you that Perth is very flat and that it’s the world’s most geographically isolated city. While these statements are true what they don’t tell you is more revealing. Perth, for example, is one of the cleanest cities in Australia, perhaps even as clean as Singapore, but the price for such cleanliness is high: a mandatory death penalty for littering. Perth is patrolled by 10 year old police officers who have been selected from local primary schools for their lack of compassion and their eagerness to impose the full weight of the law. The West Australian ran a front page story about the more than 1,000 speeding tickets that had been handed out in less than a week and it was all down to the eagerness of the police. The front page was shared by another story about a farmer named Peter Dean who had a 50s ducktail hairdo and a beer gut and who was pictured slumped against a farm gate. Dean confessed to the newspaper that he was very pleased about the lack of drought in the West and that he was looking forward to the best season since the mid 90s. If you were ever looking for a place that embodied the saying “you’ve never had it so good”, Perth is that place.

In Perth alcohol is given away for free to visitors. This makes for a convivial atmosphere at openings. The Perth Institute of Contemporary Arts – which is marked on tourist maps as PICA Arts Center – is a palace compared to its dark and gloomy cousins on the East coast. It is two storeys high with gothic towers, high ceilings and polished floors and is staff by attractive people who do everything from sweeping the floors to serving drinks to curating shows. Hatched is the annual get together where graduate students from around the country converge on the city to toast each other’s genius and beauty and display their art and PICA is the host.

In your mind you would imagine that Hatchedwould be put together by a curator whose brief was simple: go forth and find the best of the best from Australia’s art schools. In reality the way the works are selected varies from school to school. In some art schools it was simply a matter of who scored the highest marks, for others it was a casual invitation to be in the show while for some it was an actual competition. We thought that Hatched would also be a selection of recent undergrad work but the exhibition also included MA and PhD work as well. The person or people making the selection of art and artists for Hatched weren’t required to select art that was particularly representative of anything other than a range of work, so in practice schools tended to select some painting, some video and something else, usually photography. It would be tempting to say that Hatched was representative of various tendencies among young artists but since its organisation is so ad hoc, the only thing you can say about the show as a whole is that there are a lot of works and they’re all kind of similar.

One consistent aspect of the show is how disappointing many of the works were. Where artists had control of their chosen mediums, they were let down by some dodgy conceptual frame work that wasn’t properly resolved, was too wooly or was so overstated that it defused whatever effect the work had. In some cases it seemed like the artists weren’t completely in control of their medium, or failed to make you believe they were being crap on purpose. Either way, you were left shaking your head, thinking ‘this is meant to be the best?’ 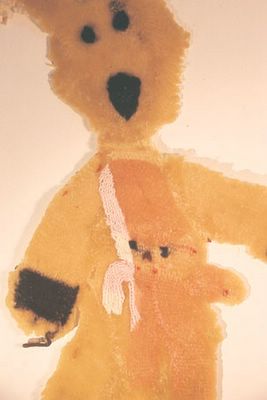 Seeing the works isolated form the rest of the artist’s practice didn’t help either. It may have been the case in some instances that the work was part of a bigger project and maybe seeing it in context would have made a lot more sense. Then again, if the works can’t stand on their own, what’s the point? One work we saw in the show that attracted our attention immediately was a work by Tony Cran from the Victorian College of Arts. The work was a painting of an owl done on some pine board and from the other side of the room it appeared that the owl was painted directly on to the board and the orange and white pattern of its feathers locked directly into the swirling wood grain of the base board. However, when we got up close, it was disappointing to discover that Cran had painted the owl onto a piece of canvas that was stuck on to the board. Aside from the fact that the apparently bravura execution of the piece was an illusion, it was a let down to discover how nasty the matching of materials seemed. Pine board is such a rich texture it should be respected. When we saw that the work was called To Lose Surprise we nearly broke down in tears. Looking at the catalogue we saw that Cran had used a completely different work from the same series. Maybe seeing To Lose Surprise in context would make more sense, but who knows?

Finding something in Hatched05 with some idiosyncratic individuality was also difficult. The exhibition was ruled by a default contemporary art aesthetic that tended to make the works meld together and, combined with some half arsed theorization in the catalogue notes, was rather timid and dull. There were some stand outs. Visitors to PICA with a sensitive nature should avoid the work of Liz Deckers, from Southern Cross University, in which there is extensive bear abuse of a kind that we find appalling and horrifying. If you are such a person, please skip this paragraph. Deckers has gone to Salvation Army stores, bought pre-loved teddies, gutted them and dipped them in boiling wax. Using an iron she has flattened them out and then, once dried, stuck them on the wall. Hung next to the 2D teddies are some apple slices on which the artist has printed pictures of samurai and princes and maybe some kind of Goldilocks figures. What does it mean? The works are called Apples and Bears and the artist describes her methodology in the form of a poem:

I found these three bears in a local Salvation Army store.
I took them teddies home.
Cut them in half.
Removed their fillings.
Dipped them in hot wax.
Flattened them out with my printing press.

This gave me distorted, woolen, but soft nor cuddly objects that no longer could be understood as trusted comforting toys.

As a hysterical parody, my bears comically evoke the carnivalesque. The Carnival, or in this case, a teddy bear parade, invites mirth. Laughter can be considered as a radical form of hysteria. Laughter asserts the refusal to be controlled and the feminist exploitation of laughter has stimulated many critiques of authoritarian structures.

My prints on dried apple slices probe issues of the body, its learning patterns and memories.

I found these apples in the kitchen.

Please, mummy, why did the nasty lady kill the teddy bears? Well, dear, she’s from Belgium so that should explain a lot but it won’t stop us calling BARE (Bear Abuse Rescue Experts).