Movie of The Week

One of our favourite art movies [movies about or by artists] is Martin Scorsese’s Life Lessons, a short film that makes up the first third of the 1990 portmanteau project New York Stories. Unlike the chapters by Woody Allen and Francis Ford Coppola, Life Lessons is set in something akin to real life, albeit the New York City art world as imagined by the director and his scriptwriter Richard Price. This an art world populated by artists, dealers and sycophants and would-be “assistants”.

The main characters is Lionel Dobie [played by Nick Nolte], a late comer to the school of impasto figurative expressionism and although the film doesn’t mention the reigning school of Post Modernist painters like David Salle and Robert Longo, there is a distinct feeling that Dobie is a man out of time, someone who would have been more comfortable drinking at the Cedar Bar with De Kooning and Pollock. His live-in assistant Paulette is his also his lover and a painter in her own right but crippled with self doubt and suffering in the shadow of the egotistical Dobie [who calls himself “the Lion’]. Forced to accompany Dobie to frigid art world get-togethers where dinner suited businessmen throw around bon mots [“Pollock did more for New York real estate than any other artist”] Paulette escapes into an affair with the noted performance artist Gregory Stark [Steve Buscemi]. 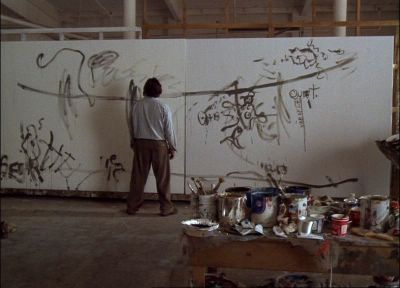 Humbled in the face of his own enormous creativity.

As the story opens, Dobie has a visit from his dealer who wants to see the new paintings. Assuring the dealer that he’ll meet the looming hree week deadline, Dobie is humbled in the face of his own enormous creative talent and is literally dwarfed by massive blank canvases. Fuelled by Remy Martin VSOP and paint spattered cassettes of The Band, Bob Dylan and Procol Harem played at full blast, Dobie shoots hoops in his warehouse and frets about his relationship with Paulette.

Scorsese experimented with many visual effects and styles that he would go on to perfect in Goodfellas and Life Lessons is packed with iris wipes, multiple exposures and editing trickery that was a foretaste of what was to come in the gangster epic. For Life Lessons, Scorsese went the whole hog with loving close-ups of paint being applied, mixed and shot out of tubes in a sly parody of Dobie’s masculinity and a celebration of paint porn. Most films about painters usually feature expressionists as director’s are in love with the cliché of paint but few have done it quite so well as Scorsese. [We can only think of one film called An Unmarried Woman that featured Alan Bates as a paint pouring 70s abstractionist that is a film about a contemporary painter who isn’t an expressionist.]

Life Lessons is full of art world clichés but the director and script writer are clever enough to ridicule them at the same time as celebrating them. Dobie’s entire artistic persona is supported by his own delusions and those of people around him. Although Paulette is suffocating under his egotism, there is a great scene in which she watches the great man at work is entranced by his handiness with a brush and paint.

Sometimes the clichés are verbal. In an effort to convince Paulette to stay with him, Dobie tells her that if she gives up art she wasn’t an artist to begin with. Appalled by the horror he has just uttered, Dobie goes off and furiously mixes paint on a garbage bin lid while muttering to himself. In another scene when Paulette tells him that she isn’t just leaving him, but leaving New York as well, Dobie gives her a mini-speech that is both a cliché but a foundation stone upon which almost all of the art world is founded – the idea that New York is an exciting place to be and that you owe it to yourself to stay:

Dobie: But what about your painting? Huh? You’re going to make a little studio in your parent’s garage – with the hedge clippers hanging on a nail and the pool stuff laying in a corner, a broken sled, mice… You work for Lionel Dobie. You work for ‘The Lion’ baby. You stretch canvases, you run a few errands. You’ve got your own room, studio, life lessons that are priceless. Plus a salary. […] Look, I’m not kidding. It kills me you leaving. It’s a suicide. This is a time… and a place… at your age! You’re right at the heart of the heart Paulette. I swear you walk now and you’ll curse yourself for the rest of your days. 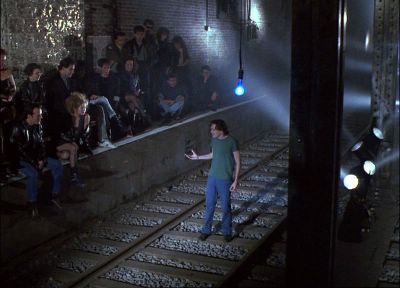 The film takes a detour when Paulette and Dobie venture out to see Gregory Stark’s latest performance piece. The world of performance art has yet to have a film that knows very much about it or does it a service rather than using it as a punch line. In Life Lessons, the performance takes place on what appears to be abandoned railway tracks with search lights, a theatrical blue light bulb and a tape playing air raid sirens. Stark’s performance is a series of anecdotes about being assaulted be people in the street and the artist’s neurotic inability to respond. Written by Steve Buscemi, the “performance piece” is more like a stand up comedy routine and the audience laughs along with the jokes. When the light bulb unexpectedly explodes as a full stop to the work you get the feeling that Buscemi’s influence was more avant garde theatre of the Wooster Group style than anything you might have seen in an art gallery.

Following the performance is a great sequence in which Paulette goes up to Stark to congratulate him on his work but is cut off by none other than Peter Gabriel glad-handing Stark. As Dobie is eyed off by Debbie Harry [“Isn’t that Lionel Dobie over there?”] the pair make their exit. [Hovering in the background is Illeana Douglas, a Scorsese regular, who also has made a career in appearing in art related films. Alonmg with her role as a film director in David Salle’s Search and Destroy, she also appeared as a pretentious video artist in Ghost World]. 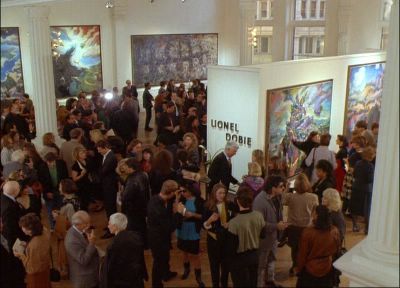 What every artist can expect – a packed opening.

The film concludes three weeks later with Dobie at his gallery opening alone, Paulette long since departed back to the art-void that is American suburbia. With well wishers crowding the gallery and posing for a series of photographs [Scorsese among them], the artist is approached by a beautiful woman working behind the bar. It turns out she too is an artist and when Dobie offers her a job as his assistant, it’s clear that the cycle of self delusion – both for Dobie and the rest of the art world – will begin again.

Living Next Door To Alice

There Can Only Be One