No Fighting In The War Room

It took a lot for us to get to First Draft Gallery. We were hung over in a way so profound we had moved beyond mere language into a realm beyond thought and gesture. Then we switched on the TV and Dr. Strangelove was playing on Fox Classics, the scene where Mandrake tries to convince Col. Guano he has to telephone the President, and all that dialogue about “preverts doin’ perversions”. Then we crashed the Art Life Van into a tree. Then we thought we’d stop for coffee and walked into Blank Space Gallery instead.

John A. Douglas was having his show Screen Test #3 [Americana] – The War Room. The exhibition was a series of works that together created a scene from Dr. Strangelove, or elements very similar to a scene, and starred the artist taking the role of General Buck Turgidson, played by George C. Scott in Kubrick’s original. In the gallery was a circular blue light box with gold stars on the top. There was a big, back lit map of Australia and our Asian neighbours called Imaginary Backdrop for A Pre-Emptive Strike. There was a photograph of Douglas in a US Air Force uniform with the map and the blue light box with gold stars caught in a facial gesture very reminiscent of Scott. And there was a DVD playing, at times abstract flickering shapes and colours under a static aircraft shape, sometimes Douglas acting out dialogue from Strangelove discussing the potential survivability of a strike. 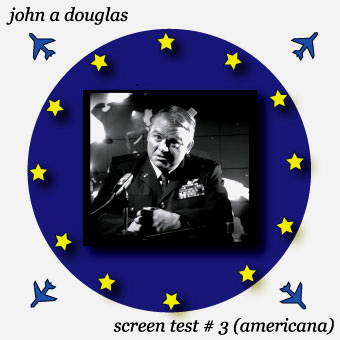 For an exhibition with so few elements there were a lot of potential combinations and a host of potential meanings. Of course, the politically pointed reading seemed most obvious, what with Douglas’s conflation of Cold War and War on Terror imagery, and then there was another probably just as obvious reading of the work as some sort of commentary on the nature of masculinity enacted in the regalia of the modern military. The room sheet for the show with an explanatory statement from Douglas went to some lengths to explain the associations and said that “Kubrick’s prophesy pre-emptive strike has become a reality in the 21st century, and moreover, [the work] is my own response to that crisis and the crisis of masculinity.”

Another work in the show was displayed on the outside wall of the gallery; a statement by the guy who designed the set for General Tommy Franks to make his appearances before the media during Gulf War II. The text had an ironic twist in that the set designer claimed his sets would look just like reality. [Jeez, eh, Americans?!! – they just hand you this sort of stuff on a plate]. The difficulty with work that has a number of prescribed meanings attached is that the artist has to avoid falling under the wheels of didacticism. It can leave the audience crushed, but Douglas’s work was interesting for us for another reason. The work very nicely evoked the ways that narrative is a series of prefabricated modules that can be rearranged to suit the circumstances of the day. Change the players, alter the set slightly, some new music, and you have a different story in a new setting.

They Said We’d Never Make It