Andre Breton had seen a few things. People blown up, gassed, maimed, gone insane. World War One and all that. It was bad. One night he came up with the idea for sur realism, extra realism, the lo fi beginnings of what we now call the hyper real. Surrealism was the name Breton gave to that strange sensation you get when two unrelated things come together. It wasn’t meant to be a visual arts movement at first; it was all about evoking the idea through literature and poetry, but Breton was a clever man. When he went on holidays to Greece and met De Chirico, he knew instinctively there was a visual component to his revolution and since he’d been a charter member of the Dadaists, he called on his friends to join the new movement. The First Surrealist Manifesto was all gags – fun and games – and everyone wanted in. The Second Surrealist Manifesto was all serious politics – Surrealism at the service of the Communist revolution – and everyone wanted out.

When the Surrealists got into hardcore left politics, it was the beginning of the end for the official movement. All the artists who had been attracted by the idea but put off by Stalin drifted away or were expelled. The best known artists associated with Surrealism – Salvador Dali, Max Ernst, Rene Magritte – faded out of the scene and by the time World War 2 ended the movement began to morph and evolve. Surrealism begat Lettrism, Lettrism begat Situationism, Situationism begat Punk Rock and Punk Rock begat Pepsi Max. The curious thing about Surrealism is that it persists – there are people out there who would gladly call themselves Surrealists when you’d be struggling to find any card carrying members of Der Blaue Reiter, an occasional Futurist or an affiliate of Vorticism. 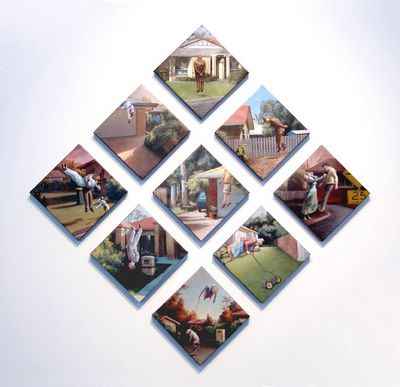 The other curiosity of Surrealism, then and now, is that most of its adherents were resolutely middle class. Magritte was a former wallpaper designer who lived in suburbia. De Chirico owned a shop. Dali and Ernst had pretensions to royalty but were the sons of bankers and merchants. That most famous of American Surrealists Joseph Cornell lived in Long Island and James Gleeson lives quietly on the Northern Shores of Sydney. One of the only other living Australian artists with a strong connection to the movement is James Guppy, a resident of Sunrise Boulevard near Byron Bay. Guppy’s latest show at Brenda May until Saturday 20th August is steeped in the traditions of surrealism’s double-take method of putting one unlikely thing next to something familiar. In this case, the combination of tract homes of reclaimed land around the north coast hippy hinterland and the floating bodies of its residents lifted up – perhaps in death or in rapture – and just hanging there in space.

Last year we said – in relation to Guppy’s work – that he was man with a very twisted imagination. Some bright spark chimed in and said, yeah, right, Guppy’s just a middle class dude living in a world far more horrible than anything he can put in his art. Fiction has no responsibility to the truth and art doubly so. The choice of isolating one thing has the potential to refer to everything else, and because you can think of something even worse, then the artist is doing their job. Guppy’s paintings are an acquired taste – there are elements of the baroque, certain and obvious debts to surrealism, quotations of the master Goya if you care to search it out, big slabs of Pop, and in the past they’ve been situated in the dark European landscapes of the mind. The big break in Sunshine Boulevard is to locate his fantasies in unmistakably urban environments. Garry Shead has been this way, but Guppy’s imagination is far more vivid and interesting than that paragon of the average. Where Shead was happy to make a mockery of suburban surrealism before turning to the cloyingly sentimental worlds of DH Lawrence, kangaroos and the queen, Guppy’s world is far darker, a place where savage children live in the tall grass at the end of the cul de sac. 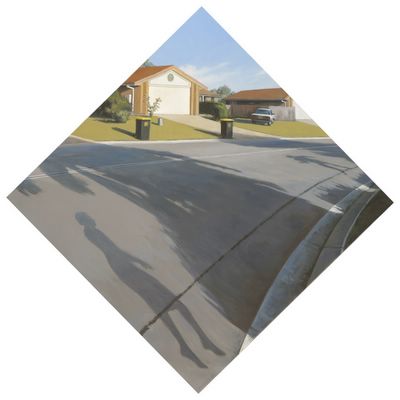 The best works in Sunshine Boulevard are the smallest. Guppy paints in acrylics for this show and the intensity of the small diamond shaped canvases are remarkable. Ruby Behind The Units, a girl crouching behind trees, a floating man in a long coat called The Appraisal and a couple kissing in mid air called Friday Evening Next Door evokes the traditions of surrealism and some of its favourite props. Suburbia is the natural home of the very strange and it comes as only a small surprise to learn that Guppy relocated to Long Island to be near the hallowed ground of Cornell.

We’re not so convinced by Guppy’s larger works and are so-so about the tricksy rotation of the canvases into diamond shape. It’s unsettling, sure, but it seems a little like over egging an already rich pudding. But the bigger problem here is that the larger works aren’t nearly as resolved as the smaller pieces. The colours are softer and the images lose some of their luster, especially in comparison to the small studies. A few that survive do so because the painting style supports their wistful images. Early Morning, Sunrise Boulevard with its garbage bins and shadow corpse seems like a window that you could step through and the gentle, washy colours are like the dew on freshly mown grass. In contrast Cul De Sac – a twisted woman and dog – matches the small works stroke for stroke.