We Can Build You

Sarah Smuts-Kennedy is all over this town. Not only does she have a show at Gallery Barry Keldoulis, she also has a starring role in The Oyster Farmer. One minute you’re on Shortland Street and the next you’re the toast of the Sydney art world. Ok, that’s not entirely true, there has been a substantial break between Smuts-Kennedy’s memorable year as Caitlin Devereux and her arrival last year with a fantastic show of photography, but it must be nice to be an artist and someone with their own page on IMDB.We can only dream. 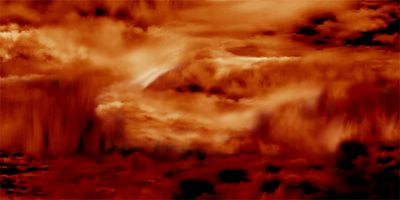 Smuts-Kennedy makes images from a digitally sampled cloud which she layers and stretches and distorts into all sorts of weird fairy floss cloudscapes like something out of Little Nemo In Slumberland. Her show last year maintained a semblance of identifiable images suggesting real, if manipulated, skyscapes, seascapes and landscapes. Delving further into the possibilities of Photoshop, this new body of work has abandoned all connection to realism and has become a huge amalgam of computer techniques. We liked the pieces that suggested depth and colour of three dimensional space rather than the superflatness of the computer screen. Mounted behind glossy acrylic sheets, the works are chocolate, caramel and icing sugar rich fantasy lands that hurt the mind with a killer ice cream headache.

Showing with Smuts-Kennedy is a mini retrospective of sorts featuring documentation of sculptures and installations by Claire Healy and Sean Cordeiro made since 2003. Art made in a collaboration by two or more artists always seems a little schizophrenic with one tendency more pronounced in one work, another tendency in another and so on. Perhaps it’s the fact that Healy and Cordeiro have been working together for a relatively short period of time, but the works seem to oscillate between one of two types of work. 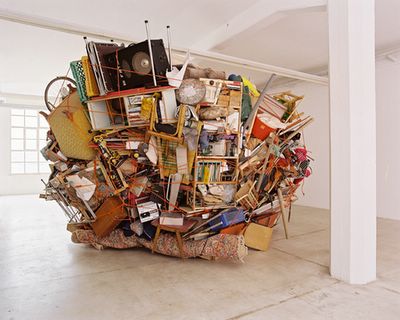 On the one hand, the pair are masters of using available materials and ready made or prefab objects in starling juxtapositions. For example, their piece Package Tour (2003) featured a Centurion tank parked at South Head in Bondi that was flanked by timber, bottles, and tire swans, which suggested that the war machine was now being used as a house. Looking at the work as a demonstration of altered intentions and recalling the fact the work was made [apparently] in response to Gulf War II, the tank took on a symbolic meaning referencing the cooption of peacetime [suburban housing] and conflict [a war machine] in the context of contemporary Australia. This alteration was done simply by putting two types of contrasting things together. On the other hand, the pair are equally adept at taking objects and, in act of collation, redistributing that material into a new space. In Deceased Estate (2004), Healy and Cordeiro amassed all the left over junk from a previously squatted building in Germany and created a huge ball of stuff held together with orange rope. Similarly, the Cordial Home Project (2003) deconstructed an entire suburban house and rearranged it into a geometric pile in the centre Artspace.

These two approaches are like complimentary opposites – taking a whole lot of stuff and doing something with it in a minimal way, or putting two things together and examining the results. The latter approach is more theatrical and is another not so successful element of their work. In Wasted Consumer Ritual (2004) the front room at Gertrude Street was turned into a corporate space akin to a 7-11 that sold nothing but bottled water. Stranded among the shelving was a stuffed seal on a cut out representation of a splash of water. Looking at this work, we couldn’t shake the notion of the Sesame Street proposition that one of these things is not the same, one of these things does not belong. The schematic representation of water and the semi-real status of the seal – although once a real seal but now just stuffed – somehow seems both too obvious a pun and too lateral. If it had been a freshly killed seal, it would have sat a lot better with us – but you can’t go around killing seals in the name of art. In their piece Raiders of The Lost Ark (2003) there’s a similarly uneasy play between objects – a house set up in Martin Place, the stuffed animals inside, the mannequins and the lighting. The same feeling permeates the intervention of orange rectangles into the abandoned Western Australian house in the pair’s Maintenance (2004).

These differing approaches propose a friction between the ways on which the viewer assesses the objects and the ways in which the artists have put them together. This friction isn’t so much a problem but more a curiosity in a body of work that appears to have come together in the last few years. It’ll be interesting to see how the artists resolve these frictioons or if in fact it will force them apart into separate bodies of work. What one can say without doubt is that Healy and Cordeiro have the ability to make an arresting image.