At 4A mid week and the gallery is deserted. [We notice that next door is a shop called, incredibly, Gizz Spot.] There is a palpable gloom about the place and as we wander around it feels like a rainy day when outside the sun beats down in glorious autumnal gold. Ghosts of The Coast at Gallery 4A arrives at a time when the gallery is trying to find its feet again. In February, Binghui Huangfu, Rod Murray and Brianna Munting all left the gallery leaving the Asian Australian Art Centre to find a way to keep the doors open. Under Huangfu’s stewardship, 4A had an ambitious program of exchange exhibitions that stretched its funding beyond breaking point. Art Life sources informed us that the gallery had been seeking $300,000 annually from the Australia Council but the Feds were only prepared to trump up $40,000. It looked quite dark there for a moment but 4A reopened a month ago as a hire space. With another show put on by external curators ½ Doz have – for the moment at least – saved 4A’s bacon.

The first and most amazing thing you see in Ghosts of The Coast is Evan Salmon’s work Dazzle Ship[“Oh God, if we didn’t have enough trouble! They send us artists!”] taking up the entire downstairs gallery. It is a massive scale model of a First World War battle ship, the ‘dazzle’ being the black, grey and white camouflage pattern. Salmon has been investigating through his painting camouflage patterns of various periods and he has previously concentrated on aircraft. The reference to art history in Dazzle Ship is the connection between Cubism and the development of patterns in camouflage during World War One. There is the probably apocryphal story of Picasso and Braque witnessing camouflaged tanks rolling through the streets of Paris and Picasso remarking “we created that.” but apocryphal or not, there is intimate connection between art and warfare. There is the question of how far does it go and what is its relevance now? Art as craft experiment hasn’t recently thrown up too many useable ideas for the military to exploit and Salmon’s investigation of the patterns seems boyish and obsessive. Sure, it’s a great big ship, but where is the art? Salmon’s early work was abstract, deriving pattern and shape from military equipment, but over the last few years his work has become increasingly literal despite gestural embellishments. Now his airplanes look like illustrations for war novels or maybe in a museum for old airframes. His step into three dimensions with his massive Dazzle Ship doesn’t really add anything new to the original idea but suggests intriguingly that his next logical step is to just skip the model making and paint some real ships or better yet, make a 1:1 model! 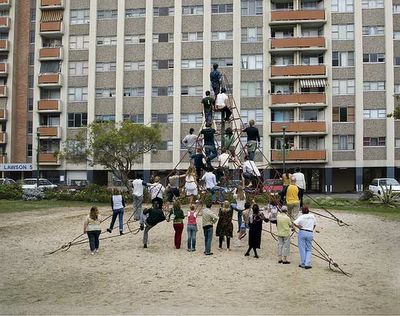 Cherine Fahd’s grant money to document homeless people in Kings Cross has been well spent. He work in GOTC is a series of images, all quite small, pinned end to end along the wall. At this point we were wondering what the idea was behind the exhibition; were the work’s creating some sort of commentary? As a unifying theme, the coast, and ghosts thereof, is a bit ambiguous but thank god Fahd is there to make it all so simple and easy to understand. Mors, Mortis features a series of black and white images of people lying on the ground, presumably unconscious or drunk or stoned, like dead bodies. Juxtaposed with these images is a series of shots of the skeleton of a seagull washed up in the sand of a beach. The last sequence of images is of the sun in the sky behind clouds, and like the unconscious bodies, printed in crappy, low contrast black and white. Do you suppose Fahd is drawing some sort of connection between homeless people and washed up carcasses? And maybe the clouds are heaven or something? Answers on a postcard.

Todd Robinson gives his work from his recent Artspace show another outing with five prints of close-ups of hands on red velvet, like sections of Pre-Raphaelite paintings. Called Sightlessness, we discovered from reading about his work with the Royal Blind Society that these are images of the hands of blind people. As to what they have to do with the coast – or ghosts – we have no idea. No further explanation is offered with the inclusion of another work called Untitled, which is a bucket on a plinth with a pig mask in it. Prateep Suthathongthai’s DVD installation Tidal Wave has some water but it is a fleeting pleasure. Running for just one minute, the video starts on a shot of a boat moving right to left, and the rectangular frame is cut up into several slightly discontinuous sections. Chug chug goes the boat. Fade out and repeat. Huh?

Next door Mel O’Callaghan has a video installation with production values to burn. A projected image of a under water frogman drifts dreamily along the wall. Called The Detection of Movement the work demonstrates the undeniable power of slowing an image right down, and with the underwater location, it’s Jah Cousteau meets Voyage To The Bottom of The Sea. Perhaps the accompany work by O’Callaghan is meant to be on the bottom of the sea – it’s a model of what looks like a oil platform, but it’s painted black and the towers have fallen over. Pat Sae-Loy’s work looked awfully familiar to us and then we discovered we’d seen it – or something very like it – at PICA last year as part of Hatched 05. In Perth, the work involved balanced cushions with piles of ash and glasses of water. For GOTC, the work is called Predicting The Fortune of Buddhism and we think that perhaps it is the first work we have ever seen that includes “Fish maw” as one of its constituent parts. Maw is like the long tails part of a prawn and Sae-Loy has stitched a whole lot together and pinned then to the wall above a row of cushions with little piles of ash in glasses of water. The fish maw looks like words spelled out and we couldn’t recognise any words, assuming the letters might be Thai script, but then thought of the Yum Cha scene in eXistenz and moved right along.

Lionel Bawden’s The Monsters [Like Some Colossal Python Which After Swallowing A Mountain Is Sluggishly Digesting the Meal] sits alone at the end of the gallery space on its specially built table. As a notional proposition for an ocean it seems to have more to do with science fiction and Solaris in particular than it does to a real ocean, or indeed, to ghosts. Whatever its tangential relationship to the curatorial gambit is, it seems explicit compared to Alex Kershaw’s Construction for Watching Waterloo. A photograph of a sail shaped climbing frame covered with people looking away from the camera – and looking at Waterloo tower – the work made us want to break down and cry with frustration. We’re always going on about letting artworks speak for themselves without the tyranny of the lecturing wall text or the overly prescribed catalogue essay, and then when we get it, we’re all at sea. This may point to the terrible possibility that without the contextualising information much contemporary art makes no sense. Without wanting to get too Greenburgian on your ass, we want our forms to be free, we want them to be sufficiently robust to stand alone and we want them to mean something too. That’s asking too much.

Who should win the Anne Landa Award?