There are a lot of things we have been planning to do. Some of them have been stymied by technology, others haven’t happened for logistical reasons. For example, how could we work a link Dorian Lynskey’s musical map of the London Tube [in which the artist substitutes the names of various musicians and bands for stations and thereby creating a relational chart of music history] into a blog about the contemporary art world in Sydney? Well, we just did and thank god, because it’s been bugging us for months. Other things missing were some excellent additions to our artist’s links including Susan Fereday, Danny Ford and Juno Gemes. We are always expanding these links so if you want in, just send us an email. 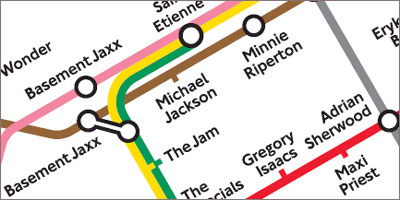 Speaking of Juno Gemes, she had something to say:

Just taking a midnight browse on my fave site but please a correction! As one of the founding members and full time resident of The Yellow House I can clearly state that Mike Parr was certainly not a founding member or a member of The Yellow House. Where did you get such an absurdly inaccurate idea from? We are real truth talkers, so away with such falsehood please. Check Yellow House Catalogue from AGNSW show…any mention of MP ….never! Please correct tout de suite! Regards from the midnight owl on truth watch – Juno Gemes.

The post that Gemes is referring to was a press release from SafARI that we posted as part of our recent round up new exhibitions and events. We have been putting this sort of low res press material on the blog for well over a year which – as they used to say at Bondi RSL – is for the information of members and their guests. We decided some time ago that The Art Life would be published bi-weekly and since we have thousands of readers dropping in every week, we could use the down time to help promote the activities of artists, galleries and other organisations that don’t get a lot of coverage elsewhere. [Which is not, as one reader suggested, a reason to be ashamed. We have plenty of reason for sorrow and regret, oh yes, but not this…]. We post this material as a service for readers and cannot take responsibility for outrageous claims or other falsehoods in said posts. We accept therefore that Mike Parr aint all that and so do SafARI:

CORRECTION: A previous version of this page, the SafARI invitation and the SafARI catalogue have all stated that Mike Parr was also co-founder of the artist-run initiative Yellow House in 1970. This is incorrect. We apologise for any embarrassment or inconvenience arising from this error. 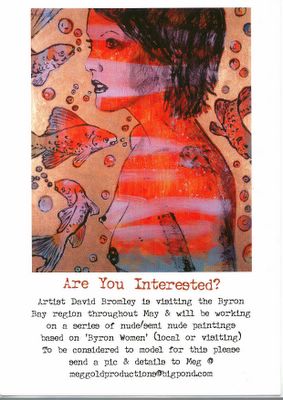 It’s hard to believe that anyone would be embarrassed by that error, we certainly aren’t, so let’s just put the mistake down to youthful over excitement. Some artists however, should be embarrassed but aren’t. Such an artist is David Bromley who has just completed a month long tour of Byron Bay looking for… ladies. An Art Life reader forwarded us one of the artist’s flyers and [on the basis of strict anonymity] explained:

I thought you might like a look at this poster which has been all over Byron Bay and in the local free press for some time. I picked one up at my favorite cafe – Succulent. I guess that David Bromley has employed someone to source women? to be his models? Its good that he has a ‘theme’ I suppose and that he’s quite egalitarian … you don’t need to be a ‘Byron woman’ … you could for instance be a Scandinavian backpacker … ? Tried to contact him via his website to confirm that he’s not being ripped off but there was no ‘contact’ email… there is an image of him in what appears to be stripey pyjamas which seemed appropriate…

Appropriate? It’s completely appropriate, as Bromley is getting more like Hugh Hefner all the time. 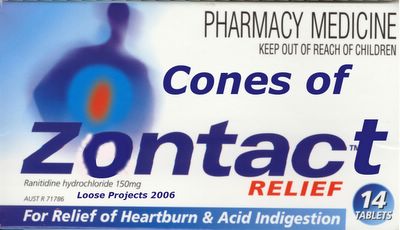 This week is dominated by the opening of the Biennale of Sydney: Zones of Contact, which is being called “the no theme biennale”. We are very excited – it’s the best catered event of the year, indeed, of the two year drought between international art fests. We’re going to be covering the show in all its glory but in addition there’s something else, something very exciting and new for this blog. We don’t want to jump the gun just yet and go off half-cocked, but very soon The Art Life will be [temporarily] crossing media into your non-visual airwaves for a couple of weeks. Details to follow as they are sorted out! In the meantime various artist run galleries and commercial spaces are cashing in on BOS excitement with exhibitions and events with a semi-biennale no-theme of their own. The most audacious is Loose Projects Cones of Zontact, an 85 artist extravaganza opening at the gallery, this Thursday May 8 at 6pm.

We are proud to announce that although The Art Life is not technically part of the show, we have come up with a COZ performance piece that all readers can do in the comfort of their own homes, offices or wherever else they access this blog. It’s called Cones of Zontact: I Am A Robot. Stand up straight with your arms and hands stiffly by your side. Now raise your forearms from the elbows so your hands are flat and are at a 90 degree angle to your legs [so they stick out from your body like a robot]. In a mechanical robotic voice, say the following: “CONES > OF > ZON> TACT… I AM A ROBOT” while moving your arms up and down. Repeat as many times as you like, perhaps moving your body slightly from side to side. 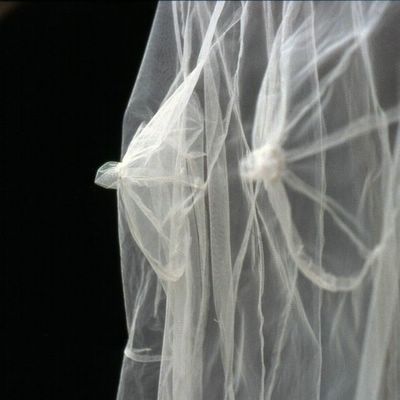 Another quasi-BOS event of note is Tracey Clement’s show Border Zones at Groundfloor Gallery from June 14 [opening 6pm]. Clement is perhaps better known as the writer of the Sydney Morning Herald’s art coverage in Metro, but she’s also an exhibiting artist having been in rather good group show at Peloton earlier this year. For her gig with Groundfloor Gallery she’s exhibiting more of her exquisitely constructed sculptural clothing. We would at this point probably also mention that Roslyn Oxley9, Kaliman Gallery and Gallery Barry Keldoulis have shows well timed for the pleasure of international Biennale visitors, but a reader recently scolded us for mentioning Kaliman nine times in the space of one review [albeit a review of a show there and the new gallery space]. In light of our blatant favoritism to these commercial galleries, we have decided not to mention them again until the next time.

Gosia Wlodarczak sent us a press release last week because she’s finished a drawing. Now, normally that would not be enough reason to put out a press release, but in this case Wlodarczak has done a huge drawing that’ll be on show in Canberra very soon. The artist explained:

Maybe it is not typical to send around an announcement when one finishes a work, but this is a special case, at least for me. Skin of the Wall consists of 676 panels (wallpaper mounted on board) and its size is 440(h) x 1,691(w) cm and the area it will occupy when installed is 74,5m square (over 800 ft square). The process of creation is finished, but the work has one final stage to be completed – installation. It will happen on the beginning of August 2006 at Helen Maxwell Gallery in Canberra (exhibition: 4 August – 3 September, drinks with the artist: 11 August, 6 –8 pm). Please find attached a computer-generated panoramic image of the work. Due to the size of our interior space and the work size, it was impossible to photograph the work as a whole. The image consists of 7 sections, which were during production, assembled on our floor and drawn separately then photographed section by section.

A Life In Oil