Thirty minutes drive from the Forbidden Palace and its monolithic nemesis The Great Hall of The People, sprawls an altogether different marking point of Chinese cultural change – 798 Factory in the Beijing district of Dashanzi. A vast, almost-former, manufacturing complex, it has seen a steady influx of artist studios and galleries over the last decade. 798 is this month hosting the third Dashanzi International Art Festival with over 150 participating galleries, studios and organizations and, unwittingly, a score of commercial units from which the sounds of wood-sawing, metal-cutting and bang-banging catch your ear unexpectedly. 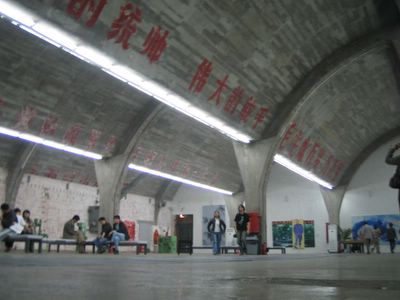 The fact that the DIAF is taking place at all is impressive. This is all happening in the seat of power of a country in which permits for ‘cultural activity’ are still required and mysterious confiscations of work and catalogues occur the night before openings. (This article won’t be read in China as The Art Life is a blocked site.) So, one can understand why the official program is quite compact and spontaneous events flourish. The festival’s co-founders, Berenice Angremy and Huang Rui, wanted to “create a platform for bringing Chinese art out from underground, claiming its legitimate place above ground.” And they appear to have succeeded in that aim reaching a compromise with authorities who are gradually coming to see art and its freedoms of expression as ‘industry without pollution’. Faint praise yes, but praise nonetheless. 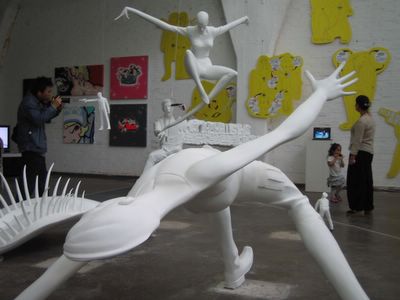 Attendance figures at DIAF are expected to be around 150,000 making it China’s largest arts festival and the festival is rapidly becoming a magnet for not only Chinese art activity, but international cultural investment with many local galleries establishing partnerships with European and Asian galleries. The festival is themed Beijing/Background in a witty nod to China’s growing influence on the world stage. 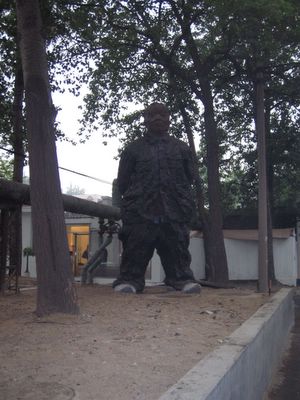 Welders on a break stand next to five-star fresh, German kollectors in front of a huge painting of a po-faced Mao. Assorted curatorial types hug each other in industrial chic café-bars, visibly emotional at their own ability to bump into each other on the global festival circuit. Ruddy-faced, immaculately uniformed, teenage soldiers observe expressionlessly as Japanimationists from the near future monitor activity with their tricorders. Nearly everybody smokes absolutely everywhere. So what exactly is on show here? We’ve whittled it down to a few galleries and events that are broadly representative, starting at Chinese gallery Long March Space. 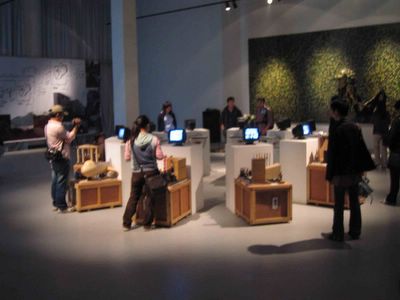 Long March is both a gallery and a project. As the latter and since 2002, it has been replicating the historical, 6000 mile Long March by taking its projects and art cultural discussions to those same rural and urban communities. The gallery is typically cavernous; about two thirds the size of downstairs at the MCA. Stand-out is Zhou Xiaohu’s Crowd Of Bystanders, a circle of ten ceramic dioramas each topped with a monitor showing a black-and-white claymation video of the scene below. For example, a woman gives repeated caesarian birth, endlessly being cut open and sewn up. Saddam Hussein is sentenced in a courtroom and has all his teeth pulled out by way of punishment. A truck full of army medics runs over two children skipping across a street, then reverses over them. It feels like CCTV from ‘toonland and there’s a troubled unity in the disparate images. In this minituarised world, each event draws a crowd of twitchy but passive onlookers.

Of course, around this circle of tragicomedy is another circle – all of us watching, many of us taking photographs. Zhou is one of the artists Long March is taking to the new Queensland Gallery of Modern Art as part of this November’s Asia-Pacific Triennial with his gargantuan new work, Utopia. 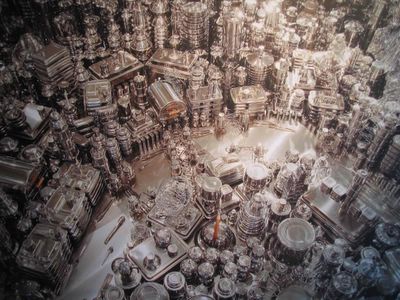 We also liked Zhan Wang’s aerial-view photograph of a central London constructed entirely of gleaming aluminium kitchenware. There’s a pots and pans St. Paul’s, a colander and cheese grater Parliament, a catering tray Embankment and, no doubt, a good-enough-to-eat-off Saatchi gallery tucked in there somewhere. It’s a polished and presented London, stripped of all history and replicated for our amusement. 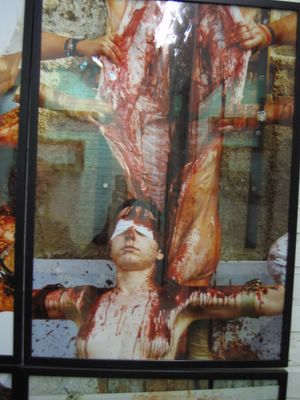 Over at White Space (a Sino-German enterprise), it’s a veritable abattoir. They’ve paired veteran visceralist, Hermann Nitsch, with painter Yang Shaobin both of whom share a taste for blood, bacon and Bacon. Nitsch is a founder (dis)member of Viennese Actionismus of the early Sixties – the central tenet of which is that rituals and ceremonies must be real, direct events, and not pretence as in conventional drama; the objective being to regain natural human instincts repressed by our conventional lives. And so it is that we’re shown, through video and photography, scenes of Dionysian frenzy involving a large slaughtered pig, lots of blood drinking and crucifixions. The overheard reaction from one visiting local family was not of disgust or shock but that it seemed a terrible waste of good food. 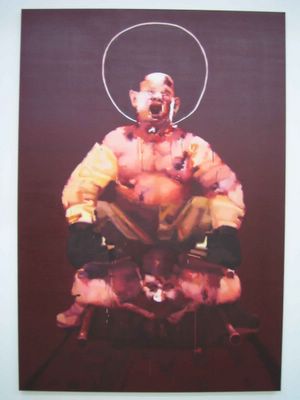 Yang’s paintings owe a considerable debt to Bacon which is, at least, openly acknowledged. The iconography of screaming mouths, flattened spatial context and flailed figures is all there. Yet they’re beautifully painted and add a certain Asian sense of cruelty. But as an exhibition it felt like an obvious pairing of big names buoying each other up. 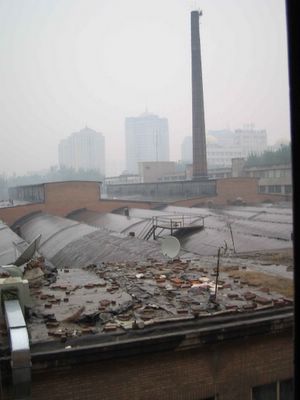 Ye Fu, performance at the top of the chimney [top right], Nest In The Metropolis 2: Chimney Plan.

Meanwhile, 100m above it all, Ye Fu is perched on top of a towering industrial chimney stack where he is performing Nest In The Metropolis 2: Chimney Plan. He’ll be there for ten days eschewing all modern comforts and meditating on the essence of life itself. He wants the performance to speak for itself and that’s what we’ll let it do. Elsewhere, in a castle-top room, the Viennese Interventionists on a grant at Head Room plot their interventions; desperate to engage with “…the real China. Rural China, you know, where the 900 million peasants live…” What they’re doing in Beijing then is anybody’s guess. We’ll also let that speak for itself – and the less said the better. 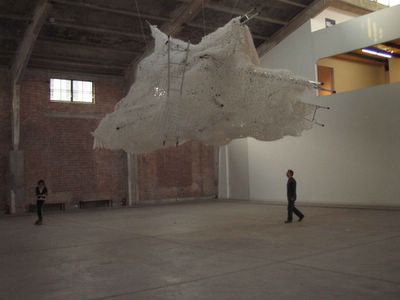 On to Sino-Italian Gallery Continua who have chosen DIAF as the first leg of a travelling show of two projects by Loris Cecchini. The first, Cloudless, is a big cloud made up of 50,000 ‘modular elements’ (plastic balls to you and us) within which are embedded ‘connective structures’ (step ladders), suspended in a cathedral space. One can’t help but be seduced. The physical oddness of a cloud indoors and the contradiction of weights between the cloud and the ladders all make for a beautifully balanced work and we had to sit down and think about our earthbound existence for quite some time. 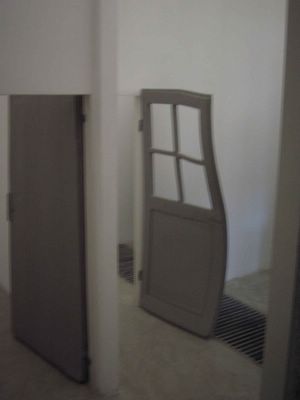 The second project is titled Empty Walls- Just Doors. In a small but labyrinthine compound of white rooms, we find that the interconnecting doors are all made of grey rubber. They droop rather forlornly from their hinges and in the absence of any Do Not Touch signs felt compelled to open and close a couple to see if we could experience the ”frustrated existential condition in which reality fades and the present seems eternally suspended between the real and the virtual.” They didn’t really work as doors but felt nice, so we guess, yes. Oh and we thought of Tim Silver. 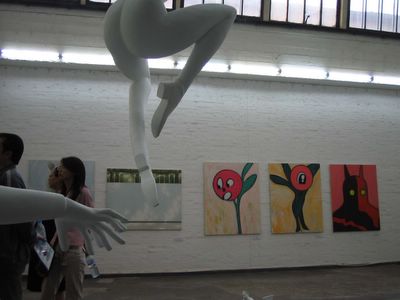 Over at Beijing Tokyo Art Projects, they’re showing Japanese paintings from the 90’s including favourites in Yoshitimo Nara, Takeshi Murakami and Chiezo Taro. The Japanese influence is borne out in the work of the Chinese artists represented here. We liked Gao XiaoWu’s Standard Times – a series of sculptures of bowing figures with simperingly benign smiles, full of false modesty and acquiescence. If they were to stand up straight, they’d tower over you. 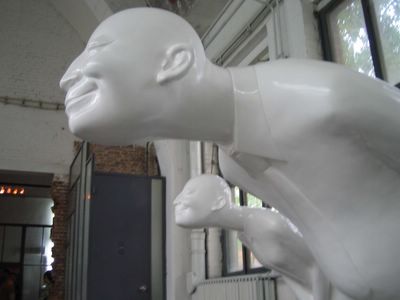 Finally, at Red T Space, sole Australian representative Ana Wojak has a tri-screen video of her and Fiona McGregor’s performance Arterial. Sadly, we missed Wojak’s live performance in which she danced, back-lit and in silhouette, behind paper screens before smearing her bleeding wrists onto the paper. Brian Wallace, director of exquisite RedGate Gallery, tells us that eventually the paper tore under the weight of the red stuff. Nurse!

Talking of the red stuff, it’s high time we headed to Café Pause to take in a few drinks and some Chinese drag queens singing chansons. The Festival runs until May 21st. Zai Jian!