Somebody has been going around saying that drawing is back. Back from where, we’d like to know, since it must have been on holiday with painting – discount tickets probably. Bastards. The exhibition The Grey Voice: Contemporary Australian Drawing at Tin Sheds Gallery curated by Jacqueline Rose and Jasmin Stephens arrives at a moment when this oft forgotten medium is making a kind of comeback. [Yes, yes, we know, we said that last week, but we really mean it this time].

Of course, drawing is central to art as a core value. It doesn’t matter if few artists are actually getting out the HB and sketchpad too much these days but everyone acknowledges as an article of faith that drawing is good, a “good thing” and since the mediation between the gesture and the result seems so immediate, we’re all happy to support that mythology. Drawing is nothing of the kind, it’s as calculated as anything else and the result of any number of conceptual inputs. It’s just that, like photography, it appears speaks of a truth beyond manipulation. 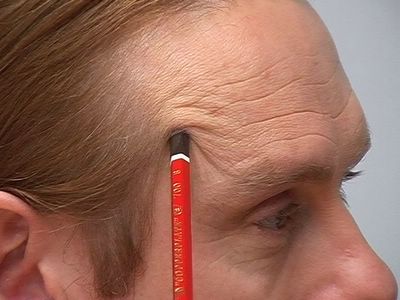 The works in The Grey Voice all play with notions of the conceptual strands of contemporary art and although there’s a lot of graphite none of it is born out of the expressionist bent. The most overtly conceptual pieces are Shirley Diamond‘s Littoral Series and Alex Kershaw’s Pencil as Repository. Diamond’s title evokes sea shores and plays with the way her drawings have been made – a sequence of evenly placed lines layered by another slightly askew series of evenly spaced lines create moiré patterns, a visual ebbing and flowing that reflexively connects the title to the action of drawing. Tight? Tighter than a matron’s bun. Alex Kershaw’s piece is a video of a guy rubbing a pencil on his temple. Then he eats it. Maybe he was hungry thinking about all the drawings he was going to do? We’re guessing the repository [and don’t you have to be careful to use the right word there…] in question is where the ideas are being kept. But that’s just a guess.

Vernon Ah Kee has some nice charcoal drawings, portraits, and they reminded us of a very talented student we once knew who made money in his spare time by drawing on the footpath outside St. James Station. We’re probably alone in thinking these works quite plain and unremarkable and are more than willing to be persuaded. From a curatorial point of view you can see why they’re there, but they’re just not very interesting. Andrew McQualter has a wall work called Metaphysics which has a guy lying on the ground on his back with his head under a chair. You’d probably have deep and meaningful thoughts if you lay on the ground with your head under a chair too, but again, it’s the play between the ephemerality of the drawing and the image. See, that’s conceptual. 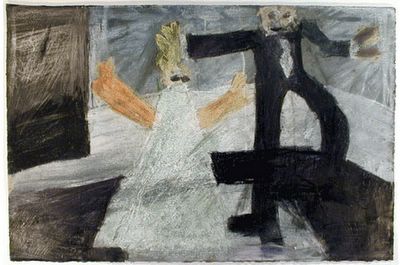 Adam Cullen has work in this show. It’s called Actual Reenactment from 1997. It’s a three panel work with a lot of writing on it and you know, if you have a set against this guy, this work isn’t going to change your mind. It is of course the greatest work in the entire cannon of late 20th century art [and we’ll be taking our 10 per cent thanks very much]. Leon Cussen’s work is hung next to Cullen and its one of the most interesting dialogues between two works in the show [there are several]. A naïve artist, Cussen examines his obsession with Fred Astaire and Ginger Rogers in a drawing of them dancing, but more interestingly in written narratives that conflate the make believe of the films with the reality of the people who played in them. We encourage visitors to compare and contrast.

Time To Take Out The Trash