There was beer and there were sausages and we were right next to the harbour. The sun was shining. Men were kissing. [We were ok with that, but sometimes guys kissing each other isn’t right, like when one straight guy kisses another straight guy on the cheek and there’s this moment where both guys go – errrrr – and all your personal lifestyle choices suddenly seem like a solid and sensible thing to have done, like a career in banking. It aint fancy, it aint showbiz, but you can get a cheap home loan]. So anyway, guys were kissing each other hello and goodbye and we were standing off to the side, sort of quiet, eating sausage sandwiches and drinking beer and looking at the water. The host comes over and introduces us to this Dutch guy named Erwin who was in town for the Gay Games. We shake hands. “No kissing for you!” he says laughing and then we start discussing the GGs and how there are no losers, only winners. How do you mean? “At the Gay Games they don’t award prizes for first, second or third, everyone gets a certificate for participating. It is a non judgmental, anti-commercial sport kind of thing.” And what do you do when you’re not in the gay games? “Haha! I am a photographer.” 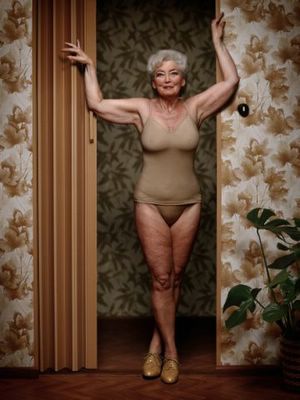 Some years later. Erwin Olaf has a show at the Australian Centre for Photography. It’s a collection of his work including the series works Mature, Rain, Separation, Paradise Club & Portraits and Royal Blood. Olaf’s works have a lot in common with the work of David Lachapelle, if not using exactly the same technique, then certainly in spirit – a broad attitude to campness that edges close to porn. It’s a populist celebration of bad taste that is profoundly conservative. With its calculating effects, incredibly high production values and super slick presentation, it comes as no surprise that Erwin isn’t just a fine art photographer but also an editorial and fashion professional with a bulging portfolio and international travel itinerary.

The series Royal Blood includes the image Di, a high gloss version of Princess Dianna with a Mercedes hood ornament stuck in her arm – a stylised and uncontroversial image – which has nevertheless attracted the ire of the Australian Monarchist League. It’s a bogus controversy since no one gives a toss about Dianna anymore and is such a calculated attempt to shock its amazing the monarchists took the bait. [Actually, not amazing, since the Monarchists won the Republic referendum by lying and cheating their way into a NO vote victory, they have attempted to police any possible anti-monarchist sentiment by trumping up fake publicity for their dying cause. Outrage? Not really. Art Life Prediction: Malcom Turnbull will be the first Prime Minister of the Australian Republic.] Other works in the same series include images of a headless Marie Antoinette, Caesar with a knife in his back and Jackie Kennedy splattered in brain matter all done up in white with white make up. Don’t worry kids, it doesn’t mean anything, it just looks good.

Erwin’s catalogue of Euro porn art clichés continues in the series Separation which has a kid in leather bondage gear gamboling in a darkly lit rooms with a leather bound mother, cat and dog and dark green wallpaper like something out of a David Lynch movie. Fans of enormous black penises and shaved vaginas will have their dreams come true Fashion Victims, a series of fetish nudes decorously draped on leather couches their heads covered with various shopping bags. Yves Saint Laurent! Moschino! Gucci! Subtle? Fuck Off! Paradise The Club and Paradise Portraits are extremely Lachapelle, although the grand old man himself has never actually used clowns [as far as we can recall]. It’s heartening to see that Olaf is unafraid to go to a place so hackneyed and clichéd and yet carry it off through sheer nerve.

A DVD and photo series called Rain is so Dutch you could scream. Family sitting around in a dining room – son, older sister, older brother, mother and father, grandparents. Music plays on a stereo. Camera pans across their faces. Tension. Older sister has a mouth so small it seems to fit perfectly beneath her nose, like her head has been stretched. More tension. People look at each other sideways. A black maid enters the room with a huge turkey on a plate. Older son rolls some snot between his fingers. The maid hovers and waits. Camera pans to the window where rain patters against the pane. Title: Rain. Fade out. The end.