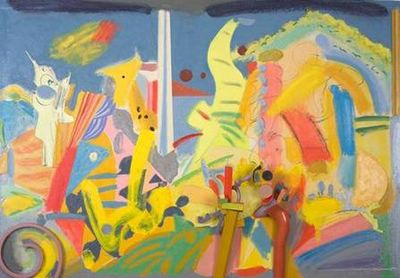 You go into the studio and you’re thinking, oh fuck, not this again please god no, it can’t be, not again. But it is and you have to pick yourself up and say, ok, it was you who created this gilded cage… but this canary can still sing! So there’s a bunch of gestures you can do and so you do them, and it is pleasing [swig of the brandy bottle]. There’s only one way out and that’s to fight, although you feel like lying down and dying. At the Nat. they treated you like a golden god, wanted to be near you and touch you. Women wanted to be with you, men wanted to be you. Christ. Did you really win the Rubi in 64? Italy in ’65 – fantastic food of course – and [swig, drag on the fag], years in the UK, had to get away, one man show at the Tate before the tourists got in on the act. Prints. Drawings. Still good at the drawings [mix some paint]. Matisse. So underrated… Actually, overrated by the wrong people. They just don’t understand the complexity of the thing. Once you get into colour, really into colour, you start to understand how deep you can go. [Stand back, have a look, light another fag]. Jesus – the thing about taking on a project like this is that people think the dedication is running out of an idea when – in point of fact – you’re going way way out beyond the point anyone else has ever gone. Ignore the wife. What’s all this in the studio? Why don’t you have a clear out? This is all just rubbish… Listen, love [gesture in the air with paint brush] …it’s extending into the third dimension in a literal way, painting in the next dimension, blue, reds and yellows, copious amounts of washes, hinting, a subtlety. [Phone rings, ignore it, you know who it is. How many years has it been now? They’ll be ready when they’re ready, so piss off]. You’ve been exhibiting in London, Europe – undisclosed locations – America – for years. Years. Honestly. This is the hard part, the uphill battle, the little red engine that could, there’s no going back, baby. [Sit in chair for ten minutes, stare off into space].

Hanging Out To Dry