Say you had a whole lot of pictures and you had to hang them in three rooms. How would you go about ordering or sequencing them? It must be a big question for the poor bastards whose unenviable job it must be organise the Archibald finalists. Some might say the best thing to do is to just put them in alphabetical order or arrange them in size from big to little, or just mix them up completely and have fun with the anarchy. Obviously, the winner has to be in the biggest room so the media can get their positions right next to it for the award giving, but everything after that is up for grabs. This year’s show is hung in a thematic way which has its own pleasures. Some themes are obvious and some are subtle. Let’s look at the obvious ones first.

The Wall of Flatness (a.k.a. The Wall of Photographic Studies) features, from left to right, Jason Benjamin’s Staring Down The Past, Martin Ball’s John Pule and Michael Zavros’s Portrait of Alex Dimitriades. This kind of portrait painting looks very nice in reproduction and Zavros, the only one of the three who can actually handle that flatness with any kind of inventiveness, is done no favours next to the other two. We didn’t seriously suggest Benjamin could win did we? We must have been on drugs.

The Wall of Drawing is a celebration of pencil on paper and canvas. Abdul Karim Rahimi’s John McDonald and Raymond Kenyon’s The Architect at Home are lovely little things that remind us of all those hours of toiling over home work exercise books and careful shading to get special effects on Humphrey B. Bear’s eyes. That both can achieve such stunning likenesses with nothing more than a box of Derwents is a tribute to the power of tracing. Hung next to this unlovely pair is Jenny Sages Gloria Tamere Petyarre and it’s just too much of everything – a little bit of drawing, a little bit of painting, some text, a picture of the Indigenous painter looking as though it were taken from photo, all thrown together on a heavily scumbled canvas. Luckily for Sages, a win in the Wynne drew all attention away from this over egged pudding.

The Wall of Surprise is kicked off with Kerrie Lester’s Rebel, a portrait of Rebel Penfold Russell. As Lester paintings go, this is a good one, and that’s surprising, but she must be getting the message by now that no matter what she paints, it has no chance of winning. None. No matter how good she is, the Trustees always think someone is better. Next to Lester’s oversized, two dimensional postcard is Ben Quilty’s portrait of Beryl Whiteley. We admit, we got Quilty and Craig Waddell mixed up last week and not just because we’re on drugs – they both use a ton of paint, they like skulls and they both make eye watering canvases that do that precarious dance between rubbish and brilliance. Quilty’s work is really very, very good and no wonder smart people were mentioning his name as the winner of The Archibald in the alternative universe where the prize is judged solely on artistic merit. His painting is a miraculous thing that surfs the shores of bad taste. The rendering of the old bird’s eyes and her bloody mouth is dazzling and we’re totally in awe of how all of this hangs together. Go de Kooning! Jon Campbell’s portrait of Darren Knight – Double Darren – is a portrait of the gallerist done in the style of Andy Warhol and that’s kind of surprising too, but not very interesting.

Around the corner is The Laying Down Wall. Mathew Lynn’s Wendy Drawing has Wendy Sharpe lying down on the floor and right next to it is Avril Thomas’s The Minister from Down Under, that depicts Alexander “the things that batter” Downer dozing off. In Australia, we take it lying down.

On the other side of the room is a long stretch we called The Wall of Boredom that broke for a little subset called The Corner of Suspicion. Lewis Miller’s dentist in a fur coat, Peter Churcher’s portrait of Jeffrey Smart, Paul Jackson’s Gretel Killeen and Robert Hannaford – taking a break from painting himself in t-shirts – did a portrait of Bob Brown. There are lows and there are lows – the Killeen picture being an unmitigated horror. And there are highs; stranded among the mediocrity was Bruce Armstrong’s Self Portrait which gave us a moment of pause as we wondered what type of eagle that is sitting on his arm?

Then there’s The Corner of Suspicion. Adam Chang’s portrait of Gene Sherman depicts the redoubtable gallerist looking to her left, perhaps a little embarrassed, a little shy, to an empty room seen through a doorway. Hanging on the next wall is John Beard’s portrait of Hilarie Mais done in his famous 50/50 style of half in focus, half out of focus. Her eyes are staring out at indeterminate point somewhere to the viewer’s left, sort of towards the picture of Gene Sherman. To anyone just wandering through the gallery this collision of two pictures really wouldn’t mean anything, but if you knew that Hilarie Mais’s husband was Bill Wright, until recently the curatorial advisor at Sherman Galleries who left after 16 years amid a wild fire of rumours, you’d start to wonder if there wasn’t some sort of hidden message in the hang.

James Guppy’s Chagrin is a self portrait where the artist has painted his head just that little bit too big for his body. It’s weird and unsettling, but not as disturbing as the fact the artist has painted himself naked in profile, his left to the viewer, one foot slightly raised as though we’ve caught him in mid step. The look on Guppy’s face is one of awkward friendliness and he looks rather like that man you run into who is stark naked in the change rooms of Wylie’s Baths as you wander between the toilets and the door. Eye contact is not advisable.

The other side of the room is called The Wall of Disappointment. Rodney Pople’s Kerrie Lester – After Goya is the best thing there, the sketchy brushstrokes, the little dog at her feet and the word ‘Archibald’ written in the dust, it’s a winning picture even if it didn’t win. Then there’s the Olsen, but we’ll come back to that in a minute. On the other side of Olsen is yet another Lester-related picture, a work by Paul Ryan called Archibald, Archibald, wherefore art thou Archibald? which we’re assuming is a joke. It’s an awful picture of gratuitous brush strokes and absurd amounts of paint that build up to nothing much at all. Making the subject look like a cross between Frankenstein’s monster and the Michelin Man does nothing to negate the nonsense of the title. Next to it is the beginning on The Wall of Impasto Acreswith Nicholas Harding’s portrait of Robert Dickerson taking a swim. There’s nothing particularly wrong with this painting, but there’s nothing really interesting here either, High Commendation or not. 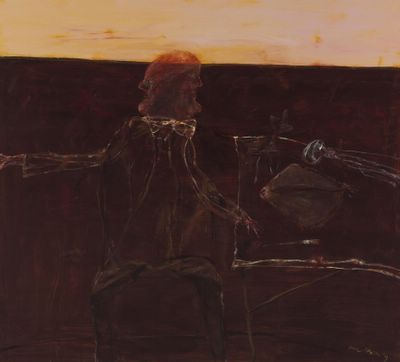 Olsen’s winning Self Portrait Janus Faced is the sentimental favourite and remarkable for the fact it looks a lot like modern art. There’s really no telling when this painting was done and could well be the best painting of 1968. Olsen’s facility with a brush is outstanding and the lucid, loose lines of the figure are wonderful, as is the fact that the figure isn’t quite contained by the edges of the canvas. Other aspects of this painting are less convincing – the head doubling as the setting sun and the two faces looking backwards and forwards are clichés that aren’t softened by the lugubrious nature of their placement and execution. What so depressing about this picture is how unsubtle it is – there’s no dinner, no dancing, no tour of the battleship – it’s just straight up the poop hole.

The final room of the Archibald doesn’t have any theme walls at all, it’s just a bunch of unsightly leftovers daring you to care. The pairing of Xu Wang’s Jiawei Shen and Jiawei Shen’s John So, Lord Mayor of Melbourne proves two things. One is how tokenistic the hang is by putting these two guys together and how crap their paintings are. Annette Bezor’s self portrait looks great with its poster reds and skin tones but how could she possibly expect to win with a warped stretcher? Deborah Trusson’s mammoth Naked is a painting of a big fat chick done in the style of Jenny Saville and Rick Amor’s Shane Maloney is a better Jeffrey Smart than Jeffrey Smart.

Did we ever tell you the story about how, years ago, we got up one morning with a terrible hangover and walked into the lounge room to discover Adam Elliot unconscious on the floor? Although he proved to be a charming house guest, we had never met him before and random unconscious people in your house are a surprise. How could we have known then that he would go on to win the Academy Award for Best Animated Short, cause a ‘controversy’ by thanking his boyfriend in his acceptance speech, then go on to save some tourists from a hotel fire and some puppies from a burning house? We couldn’t of course, but every time we see Harvie Krumpet in JB Hi Fi or see, for example, a portrait of him by David Ralph, we become unaccountably melancholy.