Smart painters have known for some time that the competition to enter is the Wynne Prize for landscape painting. Since abstract paintings are admitted, and no one is going to stand up and say, that’s not a ‘frickin’ landscape!’ the odds are way better than the accursed Sulman. Even sculptors who, let’s be frank, are the drummers of the art world have started to cotton on. Forget the Archibald, all the best stuff is in the Wynne.

The grouping of art in the Wynne is always very orthodox. There’s the Representational School, the Academy of Messy Abstractionists, the Honourable Indigenous Entries and small one person sections like the annual Noel McKenna Whimsy Faction and the Aida Tomescu Big Biscuit Group. All were present and accounted for this year. 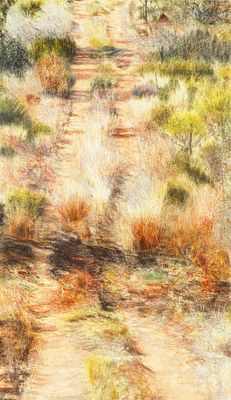 Jenny Sages, The Road To Utopia, encaustic oil and pigment on board.
Courtesy Art Gallery of NSW

It was therefore something of a surprise – a pleasant one we think – that Jenny Sages walked off with the prize for her Road To Utopia painting that was both representational and abstract, gestural yet painstakingly applied and somewhat whimsical. That the work had echoes of Indigenous art also worked in her favour. She even managed to work in a reference to Bing Crosby and Bob Hope in the title. This is a painting that’s got it all!

Guan Wei’s Big Mouse Kingdom is the first work of his that we’ve ever liked. In general we find his work far too cloying and with its concept-on-it’s-sleeve execution a throw back to the Peter Tyndall school of the fucking obvious. Luckily, this six panel work is a delight with plenty to reward school kids and the idly curious. Paul Worstead’s painting that’s hung next to it is called Cause and Effect and features two rabbits. The one on the left is holding an ear of the one on the right and the text says: “The speed of light hesitates… time drops it down a peg and plants it.” We spent ages wondering what the hell that was supposed to mean and thought it rather like a New Yorker cartoon you’re not really meant to get.

Yvonne Boag’s Lockhart Buildings is a big brassy picture with lots of colour and raises the ghost of Stuart Davis to great effect. Who he? Indeed. Salvatore Zoffrea is an artist we don’t hear so much of anymore and we thank god for that. His work is so resolutely middle brow and undemanding, yet steeped in a preposterous self importance, that we marvel that anyone gets sucked into his heavy handed expressionism. His work here, Bellbird Hill, Kurrajong is an unlovely monster that’ll look great in a board room somewhere. Maureen O’Shaughnessy, Craig Waddell and Aida Tomescu are the most convincing abstract painters here, skirting around figuration and, in Tomescu’s case, making a work that looks like a giant iced bun.

Gareth Samson stands alone with his Paradise Lost and we feel sad that, as a Melbourne artist, we don’t get to see more of his work. Paradise Lost is an eccentric concoction that mixes paint and words into a semi-figurative house, flag and skyscape. His exceptional talent at putting acrylics and oils together on board and letting them ooze is a lesson on how to do this kind of thing and all those kids in ARI-land should get down to the Wynne and check it out.

We should also mention Tim Kyle’s big sculpture Excess Baggage and its cartoony figure towering in the main room. It’s fantastic, but how this qualifies as a landscape piece – albeit it is in the landscape – we’re not sure, but after last year’s “is it a drawing?” controversy, we’re all tired out from questions of definition. Did we say sculptors are the drummers of the art world? We bet Kyle can drum in 7/8 time. Cool, man.