Wow. When you get something wrong, you can really get it wrong. We blame our dyslexia and too much booze, but when we posted this story last week we mistook David Harley for Stephen Haley, the artist whose show we reviewed on Thursday. Thanks then to readers who pointed out our mistake and we correct the record below.

In Woollahra, we couldn’t believe we’d been away so long. All the smiling people, the cafes bursting with mothers and prams, the streets a bustle with BMWs Audis and new Citron C4s… The sun was shining and life was good. Upstairs at Michael Carr Art Dealer Melbourne artist Stephen Haley is having a show until Saturday called Metamorph.

Metamorph is a show of super slick lightjet photographs mounted behind the glacial sheen of polished acrylic. The images will be familiar to anyone with even a passing interest in late 80s, early 90s cyberpunk. Haley’s works such as Logoland are composite metropolises created entirely out of doctored logos for Nike, Pepsi, McDonald’s, Mastercard et al warped and folded into the form of a city. You’d be excused for thinking, well yeah, that’s pretty standard CP stuff, but the magic of this show is that the artist has juxtaposed his nostalgic virtual reality with another kind of nostalgia – Neo Geo painting from the mid to late 1980s of the sort not too dissimilar to his near-namesake Peter Halley.

The juxtaposition is one that works brilliantly. Next to the super modern sheen of the digital images, the old world paintings [done in oils] vibrate and dance on the walls like a freakin’ pinball machine. Instead of the blocky conduits of Halley, Haley’s paintings look like a cross between circuit diagrams and groovy wrapping paper. Not Dot and Wobble Block and others celebrate the visual energy of colour without overstating the connection between their forms and the echoes of the forms in the digital works.

Being a contemporary artist de jour, Haley’s show also includes a DVD [yours for a snip at $6k] of an animated version of Logoland. Tucked away in the corner of the gallery and being shown a first generation iMac, the work desperately needs to be shown on a huge cinema screen with a monster sound system – especially since the artist has shown immaculate good taste in using Iggy Pop’s Endless Sea on the soundtrack. A shame, really, but you get the idea.

Over the last couple of years as we’ve seen more and more artist’s DVD projects and marveled at the amount of money that’s being spent in making them, we’ve often wondered which of the new generation of artists was going to be the first to make the break from the art gallery to the cinema. When you look at the work of David Noonan, Darren Sylvester or David Rosetzky – the polished faux science fiction end of the genre – there’s a high level of cinematic literacy at work. It doesn’t take much imagination to see Rosetzky doing a Godard-meets-Christian-video or Patricia Piccinini extending her mutant animals into a David Cronenberg style feature. The perils of transforming a neat 3 minute vignette into 90 minutes has been demonstrated many times, not least in the calamity that was Tracey Moffatt’s Bedevil, but at least the possibility is there. 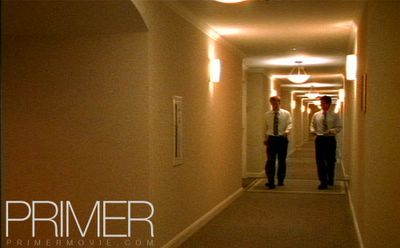 Which brings us to a movie that’s currently on limited release; Primer by Shane Carruth, an American engineer/mathematician turned first time moviemaker. OK, so why are we talking about this film – this is a site about art, aint it? Yeah, but Primer has to be one of the most pure examples of conceptual art ever committed to film. Taking the form of a science fiction story about two computer nerd geniuses who accidentally invent a time machine, the film’s structural complexity is staggering. A review of the film on The Onion’s AV Club explains more about the story and how the film was made, but what we thought of as we saw the film last week was how incredibly relevant it would be to artist video makers with an interest in narrative. Although most artists’ DVD pieces only flirt with narrative structure, there’s a distinct parallel to much of what is being made and shown in galleries and Carruth’s feature film. The other interesting parallel is that Primer apparently cost just $7,000USD to make and although there are some very obvious technical flaws [out of sync dialogue, out of focus shots and super grainy footage] the conceptual sophistication of the movie brushes all that aside. We have no idea how much longer Primer will be on at the movies, but we highly recommend a trip to the cinema to check it out or an eagle eye on video shops sometime in the next 6 months.