Slowly, Slowly brings together 5 artists whose creative practice is central to a cultivation of stillness in order to recognise inspiration. The artists are Annalisa Backlund, Jacqueline Belcher, Alexandra Noble, Marisa Purcell and Melinda Schawel. They place strong emphasis on experience, thus allowing creative activity to unravel the loops of the mind. In order to be receptive to the experience of making art, these artists nurture an approach that embraces stillness and slowness.

In terms of both process and concept, the time spent in the studio gestating and generating work usually culminates in more than just a piece of art. These artists believe that time devoted to making art, is usually akin to a deepening of self knowledge. Consciously feminine in their practice, the intuitive reigns over contrivance, and gives way to clarity during the creative process.

These 5 artists have learnt to work within the parameters of ambiguity and each continue to discover their own method of dealing with the material they generate. This exhibition aims to express that a cultivation of awareness is central to creative perception, both in the making and experiencing of works of art. Such deepening of awareness seems to vitalise and infuse the creative encounter with consciousness and can allow an uninhibited pathway to perceiving the world with accuracy and appreciation. 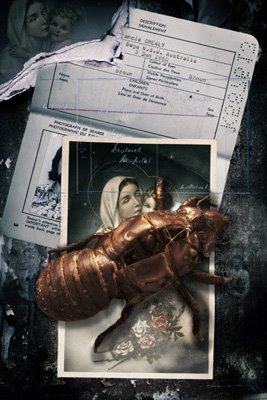 A major exhibition of photography by Gary Grealy will open at The Australian Photographers Gallery on Wednesday 8th February, 2006 at 6pm till 8pm. The show will include 24 new works and will be held in conjunction with an APG group show.

The artist will be giving a free floor talk at the gallery on Saturday 11 February at 2pm.

“Baggage is a photo essay exploring the impact of religion during my formative years and its effect on my attitudes, personality, hang-ups and superstitions as an adult. The images use nature as a representation of the self, with a background of man-made surfaces. These two elements are juxtaposed with images from the family album, passports, birth certificates and personal iconic Catholic motifs from my childhood.” 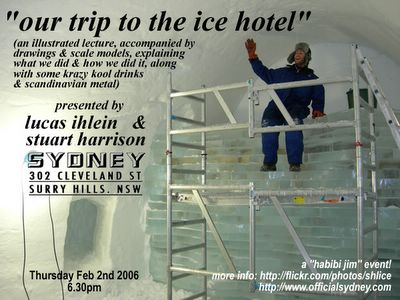 On thursday at 6.30pm at sydney (302 cleveland st), my architect friend stuart harrison (visiting from melbourne) and i are giving a slideshow (actually powerpoint) talk about our experience at the icehotel (sweden) last december, where we made some ice architecture and got to use chainsaws and stuff!

“our trip to the ice hotel” (an illustrated lecture, accompanied by =drawings & scale models, explaining what we did & how we did it, along with some krazy kool drinks & scandinavian metal) 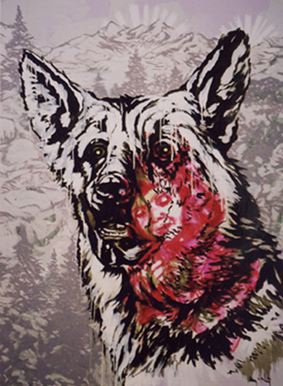 MOP Projects opens 2006 with a refreshing show of painting and sculpture from National Art School Honours candidates Nana Ohnesorge and Mitch Cairns. Both artists won major prizes at their graduating exhibition in November 2005. Ohnesorge received a studio residency in Paris with assistance from the Reg Richardson Fund, while Cairns received the Clitheroe Foundation painting scholarship.

Nana Ohnesorge paints with respect to her former medium of collage. Her work is constructed in layers of perceived ideas of her former homeland of Germany from both a personal, and art historical perspective. Elements of her own life experience are built into paintings that also appropriate features of German Romanticism, Social Realism and Pop Art. 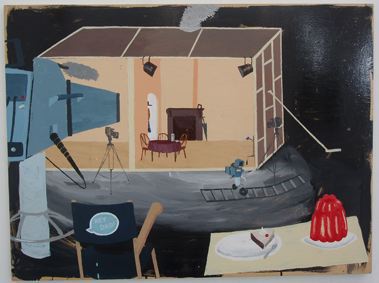 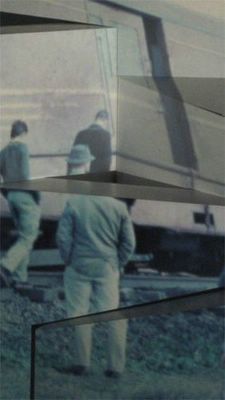 This work sets out to explore a duality of visual experience through the combination of projection, sculptural installation and the interaction between these two mediums within a narrative image. In intercepting the light source, the viewer becomes implicated in the dichotomous nature of the work obscuring the projected image in order to reveal the underlying construction and drawing beneath. The construction acts as, both a manipulation of the perspective’s inherent within the overall image of the derailed train and a device that shatters its uniformity. In fragmenting the image and the consequential framing of certain details the legibility of the whole becomes compromised- its ability to function as a narrative image lessening in direct proportion to the growing complexity of the construction. The work experiments with the balance between the figurative image, and the point at which the base structure disturbs the cohesiveness of the image, to the extent that it breaks down entirely. 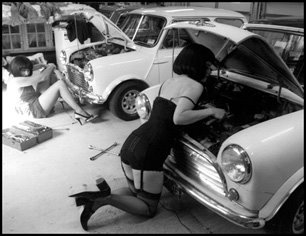 The girls from glossy sexy SLIT: dyke sex magazine are back for their third annual exhibition and this time they come bearing tools! Celebrating the launch of issue #9, “TOOLS” features femmes, butches, bois, and T-men, hardworking biceps, tool belts and tools of all trades; medical, mechanical, electrical, domestic.

The girls have approached the theme both literally, physically and conceptually, from images set in the garage, through to an installation of backyard tattoo tools, a giant pink feather duster, nurses, butchers, gardeners, bois on the sporting field, pole dancers, tools in the bedroom and tools represented through words, body parts and politics.

Curated by lady penelope, this is some hard-working lady action that you do not want to miss! 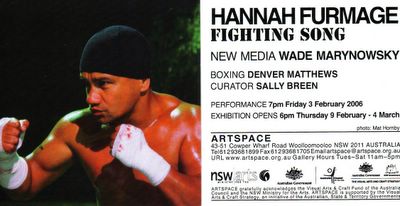 30 Years Ago In The Art Life