Uncategorized Apr 26, 2006 No Comments
Samuel Bruce’s Close all Channels
opens at PELT on the Wednesday 3 May 2006.

Close all channels – connect to nothing. A writhing monochrome tentacle suspended in the void, twitching with the impulses of an impossible physics. 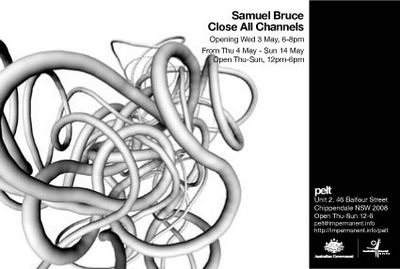 Close All Channels is a generative work utilising a spring/mass physics engine to create a series of dynamic, curvilinear structures. A chain of interconnected spring forces is tightly packed and smeared, beginning in a randomised state of high tension. Its energy is quickly released as the system seeks a state of equilibrium, coming to rest as a unique looped and knotted form.

With its momentum spent, the shadow tentacle is erased and the process begins once more.

Samuel Bruce is a generative artist and member of Dysfunctional Feed. He has exhibited work with Dysfunctional Feed and in the group shows Automated Artifact at Rocketart, Newcastle and AV OUT at Blacktown Arts Centre. This is his first solo exhibition. 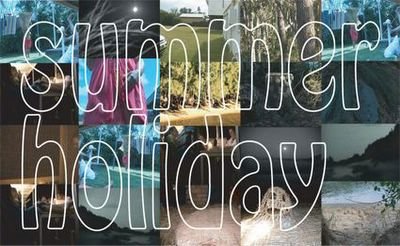 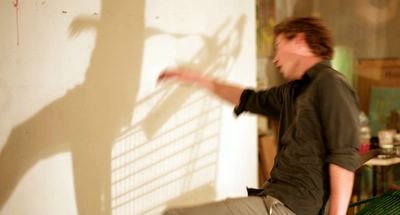 I like to marvel at memory the same way I do at receptacles. I don’t mean this in any way other than I look at a glass of water, with the water inside the glass, in my hand, and think: “Wow! Receptacles!”

Last year on a trip to Melbourne I got to run onto the MCG after the traditional Queen’s birthday AFL fixture between the Demons and the Pies. It was great; I took photos of the whole experience on a phone that I had found on the backseat of a taxi only nights earlier. It was a pretty good long weekend.

Back in Sydney some weeks later I had a fight with a shopping trolley, during which I broke my phone. That kind of ruined everything.

I’m still trying to figure out how to be a better person. 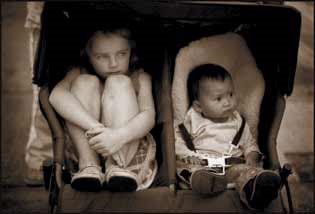 Organised by Centre for Contemporary Photography Melbourne, and starting its Australian tour at UTS Gallery, the fifth Leica/CCP Documentary Photography Award showcases the very best in today’s documentary photography. The work of these 17 photographers was selected from a national call of over 255 entries. The photographs are contemporary encounters of real and everyday situations, ranging from hard hitting political and war photography to dreamy, nostalgic summertime images by the beach; from the intense action and violence of a Queensland rodeo to the humour and vitality in the daily lives of dogs and their owners.In its tenth year, the biennial Leica/CCP Documentary Photography Award recognises how documentary is developing and growing in the 21st century, facilitating an awareness of the inherent complexities found within documentary photography. This exhibition blurs the line between dispassionate photojournalism and art photography, encouraging reflection, critical inquiry and identification. 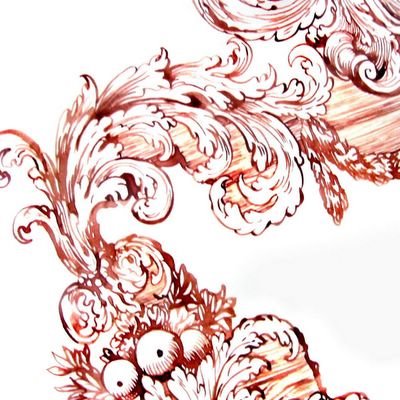 I don’t want to even use this word (decorative) because I don’t want it to be used in any interviews of mine, connected to my work. To me that word, or the way I use or feel about it is the only art sin. – Eva Hesse.

The cartouche series featured in Periphery interrogates the perception of ornament as “sin”. The decorative Victorian cartouches act as symbols for the denigrated position of ornamentation and its peripheral treatment in contemporary Western art and the aesthetic discourses of the Modernist epoch. By use of blood as a medium, notions of sacrifice and laborious endeavour are referenced as the conditions that are inextricably bound to the ideals of beauty in ornamentation practises.

Momoko Hatano is Firstdraft’s first studio resident for 2006. Firstdraft’s Emerging Artist Studio Program is supported by the Australian Government through the Australia Council, its arts funding and advisory body. 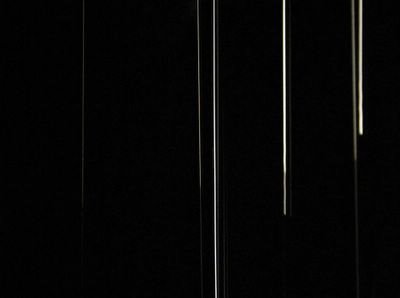 Raining Room (Diamond Dust) is inspired by the atmospheric condition commonly known as ‘diamond dust’, which occurs in very cold climates when warm, moist air is blown in from the tropics. The tiny water particles in the air freeze, and in clear conditions they remain airborne, twinkling through the air like diamonds. Gleave has been working with natural phenomena in her artistic practice for a number of years, with water in its various states forming the basis of her investigations. In an arid country like Australia water is precious, the beauty and importance of what is such an essential yet still undervalued resource is highlighted in the project. The reference to arctic conditions is also important, as the future of our current existence is dependant on what happens to the reserves of water held in ice at the poles. 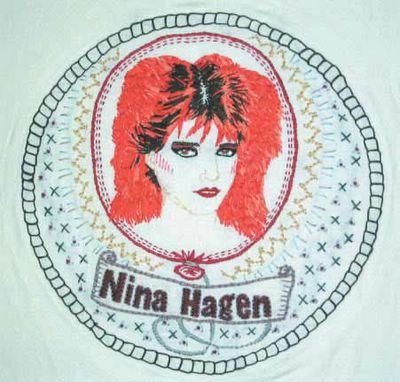 Emily Hunt and Raquel Welch work collaboratively on many projects, however in Former Fellows, they will be showing individual works.

Hunt and Welch’s practises, though different in terms of technique and medium, are closely drawn together through the convention of portraiture. We are fascinated by personalities that live on the periphery of popularity. 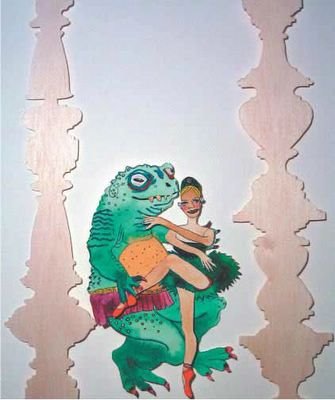 Emily Hunt has decided its time that certain people should meet. The setting being the school project stage. Andy Warhol mingles with dinosaurs and he is green with envy because Napoleon has stolen the limelight. Prima Ballerinas fawn over Bonaparte and dungeons and dragons monsters make up the numbers. Storytelling is an integral part of illustration and in Hunt’s assemblages. The use of narrative ties together its players like theatre. Characters that could never have met in chronological history hang out together in naïve constructions.

Raquel Welch pays homage to the dramatic women performers of the 70’s era, icons who she admires for their tough beauty and their music. Kate Bush, Nina Hagen and Stevie Nicks are together, hanging out, smoking a joint. Through the use of embroidery and needlepoint, Welch creates crafty portraits. An old fashioned form of devotion and adoration. A child-like kitsch, slow motion drawing of the most unlikely personalities.

The title Former Fellows is due to the fact that Emily Hunt and Raquel Welch are no longer talking. 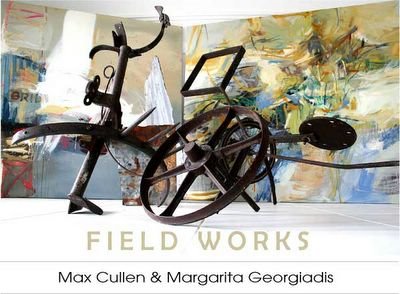 Married artist couple, Max Cullen and Margarita Georgiadis are presenting their first two-person exhibition in Sydney of paintings and sculpture directly inspired by, and in response to, their move three years ago to the Southern Tablelands town of Gunning. The exhibition will be officially opened by author/actor Shane Briant at 6pm on Thursday May 4 at Michael Commerford Gallery in Rushcutters Bay, Sydney. All media are welcome to join the artists for a drink at the opening.

Georgiadis presents large lyrical canvases and intimate small studies; abstract impressions of the surrounding landscape throughout the changing seasons from an aerial and emotive perspective. Cullen’s approach is minimal and at ground level; oil on canvas, collage and sculpture suggesting homage to our quality of light and the forces of nature.

MAX CULLEN: The Field paintings: “The universe as we know it, while it lasts is infinite. Infinity/eternity contained in an endless journey through the make-up of a leaf. To paint each blade of grass is crass; there is more to see within a speck of dust…to dust…to dust…to dust…
Minimalism is a word that contradicts itself in art. The cliché that “less is more” is more to do with saying something smart than understanding the nature of a gnat. Nature overwhelms me, all I can paint as an artist is paint. To understand this is to understand everything. The best way I can tell the whole story of my awe and wonder is to capture part of what I see – that way I say it all.

The sculpture on the other hand is to do with balance. When the work balances physically it does likewise intellectually. I delight in working with metal and found objects; finding grace and an illusion of lightness and enjoying the space displaced where the void seems solid.”

MARGARITA GEORGIADIS: “Memory is fragmented. Reality is as harsh as black and white, leaving no room for emotive essence in reaction to the fleeting moment. Fragmented memory is the essence of abstraction, and it is through abstraction that one can “feel” the presence, albeit a fleeting one, of realities remnants. I refuse to paint the landscape as I see it, to do so seems to me superfluous. My field work is steeped in memory. I paint in the studio with a fragmented memory of this landscape I have experienced. We cannot hope to see a feeling, other than in some replicated version of kitsch representation. Piecing together the un-pieceable, the discord of motion between steps through time past; a fragmented memory of experiences like walking the mind through an ocean of drought – abstraction seeks to pin-point the fluid. The result, a memory painted into existence of that which remains in reality unseen.” 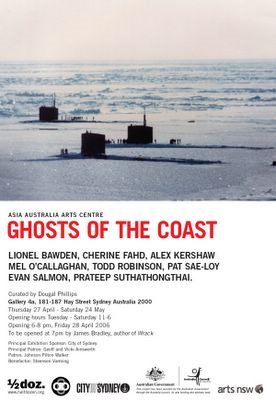 *
Art In My Backyard
Opening tonight

Margaret Mayhew Writes: “I mentioned this on my whole 3 minute segment on 2SER on monday but then trouble sticking it on the blog. It should be fun though – vintage hamburgers always merit a chuckle and I need moral support/distraction from my sickmaking life.”

A day or two before Australia Day last year, fellow artist, Deb Baker, and I did something quite uncharacteristic: we stopped off at Blacktown McDonalds and bought a cheeseburger. This turned out to be no ordinary cheeseburger however. 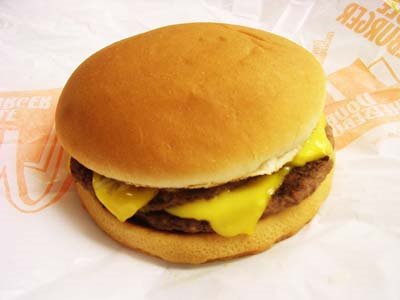 A cheeseburger, recently.
After resisting the temptation to devour it on the long journey home, we installed it as part of our work in the exhibition ‘In Pursuit of WMDs’ at Firstdraft Gallery. Just like the now famous Mary, Mother of God cheese-on-toast apparition (that sold for thousands of dollars on Ebay recently), this burger was destined for a greater use than a tasty snack or a one-off appearance. Thus ‘The Cheeseburger’ makes it second appearance – over one year later. Miraculously, it has not deteriorated at all; the meat is not maggotted, and the cheese is as fresh as the day it was umm… processed (in fact, an upturned cheese corner has given the burger a somewhat cheesy grin).

This time the cheeseburger has been filmed sauntering sleazily down a conveyer belt. It is pitch black, except for our softly focussed – almost pornographic – iconic fast food. It is soon followed by a perfect replica – a simulacrum. A cross between bumper cars and Pacman, these two burgers go through a prolonged ritual. Are they colliding? …having sex? …melding into one? …or all of the above?

Once the second burger becomes one with its pursuant, the ritual begins again and never ends – the burger repeats.

Greg Shapley is an audiovisual artist and composer. His last work was A THING OF BEAUTY: AN ACT OF TERROR. It explored the infinite possibilities of the finite using planes, statues, and jaywalkers.