The car park is nearly empty. There are benches for sitting on and paths to follow, there are bushes and trees and a long stretch of green lawn with a sculpture in the middle, but there is no one around, it’s all empty. Fir trees creak as they sway in the breeze. We walk through the front door and into the Gosford Regional Gallery and finally see some people sitting in the foyer café. SeaFM is on the public address system and they’re playing Flash and The Pan’s Hey St. Peter! The big exhibition of the moment is From Space To Place, a touring show of work by artists who’ve done residencies at The International Art Space Kellerberrin Australia, or as we call it – IASKA– and features the work of Anna Nazzari, Bruce Slatter, Sean Cordeiro & Claire Healey, Hayden Fowler, Izabela Pluta, James Lynch, Matthew Hunt, nat&ali, Raquel Ormella, Regina Walter, Tom Nicholson and Wilkins Hill.

When we say “big” exhibition of the moment, we mean that the IASKA exhibition is in the bigger space at GRG. The most popular show is undoubtedly an exhibition by an artist who you may not have heard of, but when it comes to the northern reaches of Greater Sydney, the big cheese, the big kahuna, the capo di tutti of the Hunter Region is none other than Jocelyn Maugham. A co-director of the Bakehouse Gallery at Patonga, Maugham has exhibited in galleries all over the country, been a finalist in the Archibald a few times and is extremely popular with art lovers on the Central Coast. She paints in a traditional sketch n’ drawing n’painting style beloved of traditionalists everywhere and with her prize money from the various community painting competitions she seems to win on a regular basis, Maugham is actually able to make a living from her art. We can’t say we really care for her work, but you’d have to admit she had an exhibition with a title that could so easily have been a show by some smart arsed Sydney painter: Patonga – A Drinking Village with a Fishing Problem.

So at the Gosford Regional Gallery, there was one completely deserted space full of work by the crème de la crème of emerging contemporary art talent of installations, found sculptures and about a half a dozen DVD players, and in the other, a reasonably crowded space full of paintings of fishermen and landscapes, charcoal renderings of same, others done in oils, and all would look great in your mum and dad’s living room. It’s a great idea, taking contemporary art to the ‘country’, letting the regular folk enjoy a cardboard cut out of a barrel, or a sign that says NO WILLIE NELSON, or a video that’s nothing but credits, but whatever the intention might be, the punters vote with their feet and enjoy Maugham’s art and give IASKA short shrift. 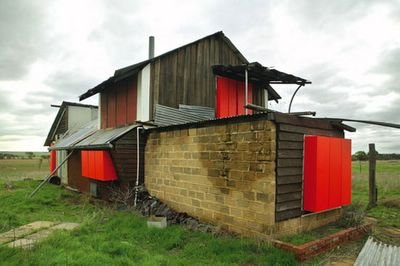 From Space To Place attempts at various levels to come to terms with the same sorts of disjunctions we experienced at the GRG. Take a contemporary artist from Sydney or Melbourne or some other city and put them in the countryside of Western Australia and what do you have? Artists respond in various ways, some working with available materials in available space. Cordeiro & Healy’s Maintenance was a work that plugged the windows and doorways of an abandoned farm house with orange blocks. The work is relatively simple but visually evocative, and concerned with the slow destruction of the building through wind and sun and rain, the work sets up a rich contradiction between the smooth, solid orange boxes and the slowly disintegrating house.

Matthew Hunt worked in similar way and his Heliport Kellerberrin was a series of 10 images of the letter H painted onto various flat surfaces around town – a slab of concrete, a road, a wall. It’s as if the town was now the centre of helicopter traffic, silent spaces awaiting the chug-chug-chug of descending blades. These elegantly simple pieces extend the artists practices into the spaces of the country town in a very immediate and decipherable way and although you might prefer your art a little more demonstrative, there’s no mistaking the high art intentions.

nat&ali have probably the most egalitarian piece in the show – Honk 4 Art is a video of the artists sitting on folding chairs by the side of a road just under a couple of signs – QUICK STOP TRUCK PARKING and INFORMATION BAY. Their hand made HONK 4 ART sign – accompanied by the glorious non sequiter WE DON’T KNOW WHY EITHER – invites passing motorists to do just that and they are rewarded with a smile and a wave from the artists. There’s nothing too tricky or high falutin there, and it was great to see the number of honks they got. An accompanying painting done in the style of Russell Drysdale of the artists in their chairs with their sign seemed to be saying something about art, but we didn’t quite get it. Raquel Ormella and Regina Walter made a fanzine of drawings of people’s clothing styles in a work called Flaps no.8: What People Are Wearing in Kellerberrin/Unwept, Unhonoured, Unsung, Japan, which put the fashions of outback WA with the street wear of Tokyo, a catalogue of smart slacks, running shoes and sloppy joes with kimonos and denim jackets. In a limited edition of 99 and tied to a table with a string, the fanzine seemed far more exclusive and precious that it at first seemed, which is a shame, because it’s normally exactly the kind of work we like.

Another approach to being given a residency in far flung place is not worry about the issue of space at all and just do your thing no matter what. Hayden Fowler has a video in From Space To Place called White Cock, which is an almost static image of a rooster sitting on a perch surrounded by a gold gilt frame. The catalogue explained the artist had made the work in response to a five month holiday in South America and is [it says in the catalogue] “an exquisite refrain on the relationship between white culture and the third world.” We might have thought it could equally be about a pun on the artist’s name, but we kicked ourselves that we didn’t realise the political implications of a great big cock. In a similar vein of complete incomprehension, Tom Nicholson made a video called Documents After A Marching Season Kellerberrin 2004-5 in which people are seen marching up a road – one sequence at dawn, anther at dusk – holding a banner with a person’s face on it. On the other side of the gallery, Wilkins Hill was the artist whose work included the sign NO WILLIE NELSON and we thought, yes, let’s leave it at that.