Two shows on at the moment have been generating a significant word of mouth excitement. One is David Griggs’s Exchanging Culture for Flesh at the Art Gallery of NSW Contemporary Projects space, the other is Mark Hetherington’s The Difficult Second Album at Ray Hughes Gallery. Seeing them on the same day probably prompted a natural tendency to compare and contrast, a tendency that we try to resist, but there is a natural connection to these two otherwise unconnected artists. 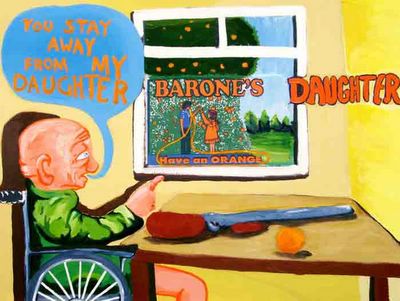 Mark Hetherington, You Stay Away From My Daughter [If I was 30 Years Younger], 2006.
Oil on canvas. Courtesy of the artist.

Hetherington is madly ambitious and judging by the crowded gallery space at Ray’s, also wildly productive in his studio as well. Only 71 large scale canvases in the show? Slow start. The works were hung up and down the walls, three deep in places with an accompanying wall of densely collaged drawings and sketches, cartoons and cut outs from newspapers. Hetherington likes his humour big and blokey and a little deranged and you get the feeling from looking at his show that he’s got a pretty convincing slap it on approach. The problem with jokes in art is that they often go stale before the paint is dry but Hetherington is fast and loose. He’s also a bit of fan of Philip Guston from the looks of things. One small work called Futuristic Knobs, Dials and Gears with Burger makes this connection explicit as does It Was Really Lucky We Weren’t At Home at the Time, which is a giant knife hovering over a little house.

At a smaller scale, Hetherington’s paintings are convincing, the immediacy of the technique working well with the scale. Other larger works incorporate complete album covers and cardboard boxes into them. Our favourite was Out Of The Blue that takes the album of the same name by ELO and extends the spaceship in space to a large canvas. Hetherington has painted in a little man inside the spaceship taking a dump, which then falls like a huge asteroid through space. How we laughed. Another work used Duke Ellington’s soundtrack album for Anatomy of A Murder, which was quite nice, but seemed like sacrilege. Some of the larger works lost focus and really needed the concentrated composition of the smaller accompanying pictures. 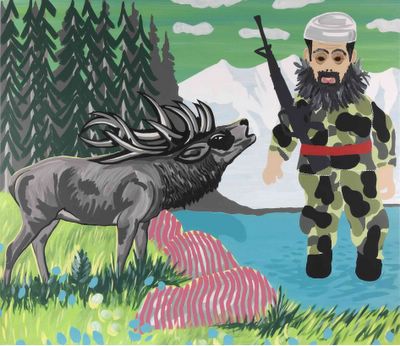 There’s plenty to like about The Difficult Second Album, it moves quickly and although more like a triple-concept album with a few dud tracks, you’re swayed by the bravura display of paint on canvas. Hetherington also seems to be an artist who wants to sell us an idea about his own subjectivity. This is his connection to David Griggs, not so much because most artists do the same thing, but because they both trade in large scale paintings with overtly explicit agendas. Whereas Hetherington is about light and fun, Griggs’s stated aim is to depict the horribleness of the world. His approach is to combine the politically obvious with a warped sense of playfulness that may just cut out the crap and tell it like it is. Everyone needs a hobby in life and Griggs’s appears to be to speak truth to power.

Taken alone, the paintings seem a little overstated and some, like Banned In The US [Restaurant Painting #2] look like they might come from some lame satire like TEAM America World Police. The works are situated in a cartoonish room with a giant Persian carpet, an almost worn out six piece settee and fake walls and painted sky. Reclining on the couch, one might take some time to notice that far from being naïve or badly done, Griggs’s paintings achieve what few other artists can do, a sort skilful badness that makes a series of deliberate gestures, repeatedly and in your face. Hetherington should take note of this approach as Griggs takes a lot of calculated risks and pulls off pretty much every single one of them.