CHRISTOPH GRUNENBERG In 1951 you did a number of paintings with random arrangements of bright colours. These works, in particular Colors for a Large Wall (1951), were a radical departure from your previous, mostly figurative paintings and from the collages experimenting with abstraction derived from observed phenomena of the visible world. Can you describe their genesis?

ELLSWORTH KELLY In October 1951 I left Paris and went to the south of France. The summer before, observing how light fragmented on the surface of water, I painted Seine, made of black and white rectangles arranged by chance. I then started a series of eight collages titled Spectrum Colors Arranged by Chance I to VIII. Before this I had not used colour extensively. The collages employed different systems and arrangements, using chance to organise where a spectrum of eighteen colours would be placed. 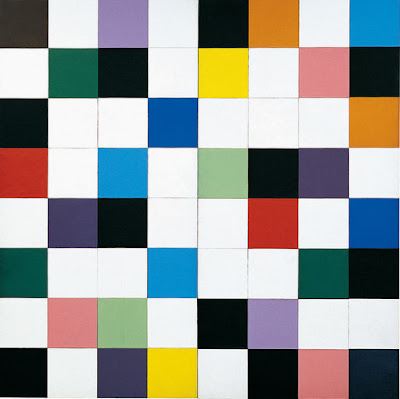 CHRISTOPH GRUNENBERG: Did you use a mathematical system with the early works?

ELLSWORTH KELLY It was a chance system for the placement of colours on a grid. Numbered slips of paper each referred to a colour, one of eighteen different hues to be placed on a grid 40 inches by 40 inches. Each of the eight collages used a different process.

CHRISTOPH GRUNENBERG Did you make conscious references in the arrangement of these works to the aesthetics of the colour chart?

ELLSWORTH KELLY I never thought of colour charts at all when I was working on them. They were really an experiment. I wanted to show how any colour goes with any other colour. Above all, I wanted to learn about colour relationships. Many of the works of this period start from chance encounters, such as shadows on a staircase, the reflections of the sun on the River Seine and the exposed sides of buildings that showed the abstract black patterns where the chimneys had been. After the experiments with arranging colours by chance came my first works using the actual colour spectrum as a source (Spectrum I, 1953)…