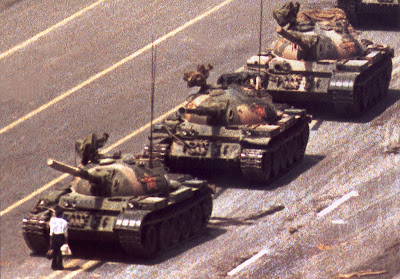 Thursday June 4 2009 marked the 20th anniversary of the Tiananmen Square protests and the subsequent massacre of an unknown number of students. Perhaps the most famous image to become associated with the event is the single frame of photojournalism that is known as “Tank Man”. As the New York Times reports:

“Twenty years ago, on June 5, 1989, following weeks of huge protests in Beijing and a crackdown that resulted in the deaths of hundreds, a lone man stepped in front of a column of tanks rumbling past Tiananmen Square. The moment instantly became a symbol of the protests as well as a symbol against oppression worldwide — an anonymous act of defiance seared into our collective consciousnesses.

It all started with a man in a white shirt who walked into the street and raised his right hand no higher than a New Yorker hailing a taxi,” James Barron wrote the following day in The New York Times. The picture appeared on the front page of this newspaper as well as in countless other publications around the world.

To this day, the identity and fate of the man in the picture remain unclear. A riveting documentary, “The Tank Man,” by PBS Frontline in 2006 explored his fate. Yet still no one knows for certain who he is or what exactly happened to him. The image is largely blocked on the Internet in China. Despite its iconic status and historical significance elsewhere, most young people there do not recognize the photograph…”

Like many iconic images of historical events – the street execution of a Viet Cong fighter during Tet, the raising of the US flag on Iwo Jima, the Zapruder film – these images come to define not just our memory of the event but also its meaning.

“As the tanks neared the Beijing Hotel, the lone young man walked toward the middle of the avenue waving his jacket and shopping bag to stop the tanks. I kept shooting in anticipation of what I felt was his certain doom. But to my amazement, the lead tank stopped, then tried to move around him. But the young man cut it off again. Finally, the PSB (Public Security Bureau) grabbed him and ran away with him. Stuart and I looked at each other somewhat in disbelief at what we had just seen and photographed. I think his action captured peoples’ hearts everywhere, and when the moment came, his character defined the moment, rather than the moment defining him. He made the image. I was just one of the photographers. And I felt honored to be there…”

After running their initial story about four photographers who captured the moment in 1989 on Wednesday, the New York Times was contacted by Terril Jones, another photographer who had a brand new angle on the incident:

“While working as a reporter in Beijing during the Tiananmen Square protests of 1989, he shot many photographs and recorded several hours of video. It wasn’t until weeks afterwards, when he had returned to Japan, that he discovered the magnitude of what he had captured — an iconic moment in history from an entirely unique angle.

His version of the tank man has never been published until now.

For 20 years the negatives rested in Mr. Jones’ belongings, following him across the world throughout his career as a journalist. He contacted The New York Times after reading the accounts of the other four photographers in Wednesday’s Lens blog.

Mr. Jones’ angle on the historic encounter is vastly different from four other versions shot that day, taken at eye level moments before the tanks stopped at the feet of the lone protester. Wildly chaotic, a man ducks in the foreground, reacting from gunfire coming from the tanks. Another flashes a near-smile. Another pedals his bike, seemingly passive as the tanks rumble towards confrontation…”