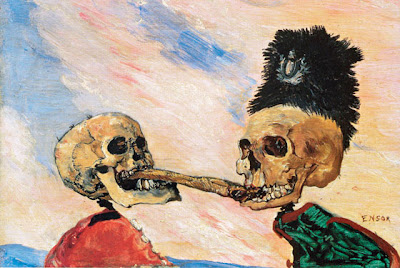 Ensor’s Skeletons Fighting Over a Pickled Herring (1891), at MoMA

“The art gods cooked up something special for James Ensor. This avant-garde painter’s decisive moment came in a salon show in Brussels in 1887 (the same year the gods had Van Gogh meet Gauguin). Ensor was a co-founder of a group called “the Twenty,” living with his mother at 27, and doing all right in his native Belgium. That year, he exhibited a breakthrough series of large, smoky drawings of Christ in modern-day settings. As fate had it, they were installed near Georges Seurat’s epic, world-changing A Sunday on La Grande Jatte. Reactions to Ensor’s work were mixed at best. Many critics and viewers, including his artist friends, enamored of Seurat’s ideas and methods, found Ensor’s religious subject matter and murky drawings “fatally retrograde.” (The criticism set him off; he referred to “bizarre Pointillists operating behind the scenes,” of being “surrounded by hostility” and “mean vile attacks.” He condemned Impressionists as “superficial daubers suffused with traditional recipes.”)

“Today, Ensor is still squaring off against the master of speckles. The L.A. Times critic Christopher Knight calls him “the anti-Seurat.” Ensor’s swirling surfaces, kaleidoscopic color, corkscrewing space, fluttery fevered touch, and fiendish feel for facial features and fanfare make him, with El Greco, one of the great weird painters of all time. At the Museum of Modern Art’s diligent, disciplined Ensor retrospective, you can see that he was better than just about anyone at painting crowds, clowns, contempt, and cacophony. Despite the flushed grandstanding in many of his paintings, his perfect storm of inflated self-esteem, angry viewpoint, and perverse inner landscape combine to make him one of art history’s visionaries…”

The Summer Wind Came Blowing In…

“This is the plan. Get your ass to Mars…”