A Horse Walks Into A Bar

What a week it’s been. Mister Magoo went to Iraq to thank the troops. It wasn’t on behalf of the Australian people, mind you, but a personal thank you for saving his electoral bacon. Then Gai Waterhouse theorized the only reason that her horse Love You Honey could have tested positive for cocaine was that the Regent Hotel in Kingsford is a “known” coke dealing establishment and, therefore, the horse had been “swept up in a cocaine epidemic.” How one connects to the other, we’re not sure, but the closest the hotel has come to a horse walking into the public bar are the hotel’s blue collar clientele betting on PubTab. Then knock us over with a feather, Bob Carr goes and resigns as Premier. Not only do we lose the only intellectual to hold public office in Australia, – and a guy who can go toe-to-toe in onstage interviews with visiting authors of the stature of Gore Vidal – we also lose one of the most capable Arts Ministers to have ever held the portfolio.

The problem we have with most arts news is that we just don’t care. We’re not very interested in what NAVA has to say about the Meyer Report for example. We know we should, but we just don’t. When we read that Kim Beazley had taken the shadow portfolio of the minister for the arts – and made Peter Garrett his parliamentary secretary of the arts – it would be hard to care less. Say what you like about the Brown Bomber, but Beazley’s arts credentials are incredibly thin. Bob Carr, in comparison, was one of those rare politicians with an actual interest in the arts and instead of simply using the portfolio for access to glitterati schmooze fests, you’d actually see Carr going to screenings at the Sydney Film Festival or hanging out at the Sydney Writers Festival. True, we never clapped eyes on him at an exhibition, but you can’t have everything.

We can only manage token outrage at the announcement that Cherine Fahd has been awarded the $30,000 NSW Women’s and Arts Fellowship to “complete a community based project on Sydney’s homeless people”. That money had to go somewhere and on one level we can see that giving $30k to an artist is a much better idea than just giving the cash to the Wesley Mission. But as we say, it’s just token outrage and we wish Fahd well. She can have an exhibition of the work and maybe sell some as well. That’d be nice, wouldn’t it?

We also learned with some feigned interest that Cromwell’s – the auction house who have their own art prize – are putting the deadline for applications for the prize back to September 9th “due to a large number of enquiries from artists about the conditions of entry”. An art competition is always fun and hopefully a distraction from a story on Cromwell’s Big Jim ‘Jimbo’ Byrne and the company’s online ads for their wine auctions. As was reported by the Sydney Morning Herald’s Sauce column:

Cromwell’s has been running an ad on eBay headed: “DON’T BUY THIS WINE – At prices THIS LOW you may look like this EVERY NIGHT !!!” The ad has an accompanying photo with none other than Jimbo, seemingly out cold on a leather couch with three empty wine bottles nearby.

“It was my idea – we should get someone to lie down and pretend to be drunk,’ said Byrnes. “It was supposed to be funny.”

Sadly for Jimbo, enforcers at the Department of Gaming and Racing thought otherwise. The officers deemed the ad to be in breach of the rules prohibiting promotions that encouraged the abuse of alcohol, said the department’s communications manager Jill O’Meara. So Cromwell’s was issued with a notice to comply and Byrnes told the Herald he would pull the ad.

The one crucial fact missing from the SMH’s coverage of this embarrassing debacle was that the Dept O’ G & R’s Jill O’Meara was also the guitarist in the mid-80s funk-punk band The Tame O’Mearas. Ok, so it has nothing to do with art, but there has been a lot of discussion here at The Art Life about people in bands and music from 20 years ago and that’s about the only thing that gets us really excited these days. We should really be on top of the whole art world politics thing and have some sort of strong opinion about, say, Nick Tsoutas move into the Casula Powerhouse’s top job. But like we say, we don’t really. 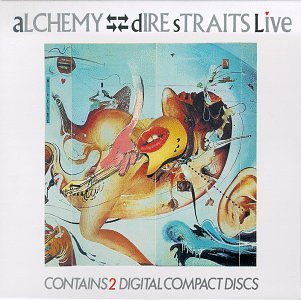 Money for nothing, chicks for free.

All of this is an incredibly convoluted way of talking about the only recent news story to take our interest. When a promo item in a Christie’s envelope arrived at The Art Life office we were perplexed to find a catalogue not for an auction but for an exhibition by an artist we’d never heard of named John Illsley. We had a look at the work and it was extremely ordinary modernist Picasso-esque paintings and saw that the show was being staged by Nevill Keating Pictures, a gallery in London. So that explained it – Christie’s plush new offices in Edgecliff were being hired out.

We tossed the catalogue on a pile and didn’t think of it again until we opened the Sydney Morning Herald and read the following under the headline No money for nothing in move from bass to brush:

What do you do when you’ve sold millions of albums, dazzled as many groupies and toured the world with one of the biggest bands of all time – and then the band breaks up? If you’re John Illsley, one-time bass player with Dire Straits, you begin to paint.

You mean this is the same guy WHO USED TO PLAY BASS FOR DIRE STRAITS???? Not only were they one of our most hated bands in the 80s, their Alchemy CD also featured the Brett Whiteley painting of the same name on the cover. It was nice to find out in the article that, like Ron Wood and Bill Wyman before him, a career in the art life beckoned:

[…] It was a chance meeting with painter Brett Whiteley in Sydney in 1983 that inspired Illsley, who studied art in high school, to “join the art fraternity”.

“[Whiteley] called me and said, ‘I really like your work, do you want to come see my paintings?”‘ Illsley said. “I walked into this studio and realised I was in the world of a magician. I mean, he was doing some extraordinary things.”

Whitely, Illsley said, taught him the key to abstract painting – “there’s no end to it and you’ve just got to decide for yourself when you stop” – and his influence is most notable in Illsley’s harbour landscapes: flat, blue pieces dominated by white geometrical shapes.

Illsley isn’t a blow in either. He apperently owns a house in Point Piper which provides him with many hours of inspiration:

For the past 20 years he has also kept a flat in Point Piper, a location that has inspired many of his works.

“I live on the water here; one is constantly looking at boats and shapes and colours and [the feeling] of things coming in and going out.”

As for missing the rock’n’roll life, Illsley makes it clear that selling paintings, while initially an “intimidating” prospect, has its own thrills.”It’s like getting your first gold album,” he said of his successful first solo show.

Mind you, all this palls into insignificiance when we read that David Hasselhoff released a Switzerland-only rap single called Pingu Dance which sampled Pingu talking his crazy penguin talk. But that’s not really art related so we’ll leave it for another day.

There Will Be Art Space!