Last weekend, one of our neighbours, the happy island city-state of Singapore, finished hosting its very first Biennale. Eschewing the all-expenses-paid-for press junkets and glitzy launch parties of early September, we chose instead to cover the final days of the event with consideration and a clear-mind to survey what the neighbours do, and, more crucially, how they do it.

The Biennale grew out of Singapore’s annual arts festival which had been eagerly promoted throughout the region as a proper, grown up visual art event, but graduating to the ranks of serious ‘biennale’ has been an entirely new concept for a country with little artistic identity or contemporary art credentials to speak of, and which was micro-managed by a government which proudly controls so much in the lives of its 4 million citizens, not least of which is through censorship. With no commercial gallery scene comparable to Australia, Europe or the UK – and with most art dealing taking place discreetly behind closed doors [appointment only you understand] – the only commercial ‘contemporary art’ accessible to the visitor is strictly of the tourist kind.

The local arts festivals of the recent past have tended towards the wincingly mainstream. This time, however, with the highest level government approval, close cooperation between its various institutions (as well as with two other, concurrent biennales in Shanghai and Gwangju) and an imperial ton of cash, Singapore has given its people the chance to see contemporary art from around the world in the flesh; pretty much uncensored it seemed and presented with great imagination. 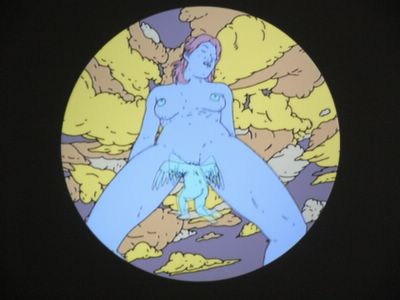 For its debut biennale Singapore’s National Art’s Council imported a team of highly experienced curators headed up by Fumio Nanjo [whose day job is deputy director of Tokyo’s Mori Art Museum] but the seed for the whole enterprise came from within Singapore. The construct of the Biennale was the display of the work of some 90-odd artists with a 60 percent presence of Asian artists from around the world and the heavy artillery included Jenny Holzer, Mariko Mori, Barbara Kruger, Mark Wallinger and Xu Bing. 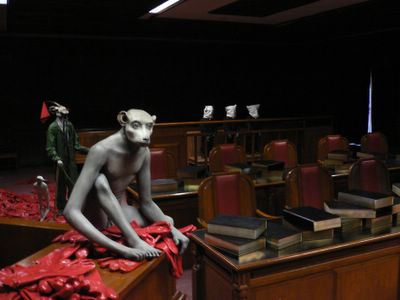 Jane Alexander, Verity, Faith and Justice, 2006.
Mixed media installation
For the Biennale the entire city was annexed; not just the public Art Gallery and Museums but places like City Hall, opening the very heart of Singaporean politics and justice to artists and allowing the public to wander through courtrooms and even judges’ chambers. Site specific installations were also to be found in a number of churches, a mosque, a synagogue, and Chinese and Hindu temples. The disused army barracks of Tanglin Camp was transformed along with the main focus of pretty much everything that happens in Singapore – the shopping drag of Orchard Road. 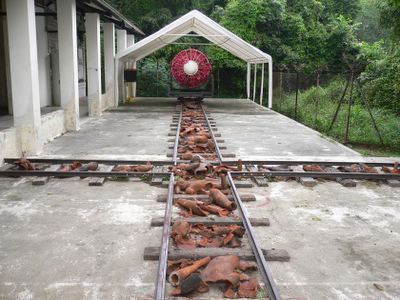 Jumping on the thematic bandwagon that just about everyone else seems to be abandoning, Singapore’s Biennale came with the timely, thumping-big theme of Belief – chosen, we’re sure for many reasons, but ostensibly to reflect the cultural diversity of the Chinese, Malay, Indian and Eurasian populace. Someone is trying to make a point. Typically the Singapore State goes about anything via cheerily Orwellian dictates – Have a baby! Have three! Tax breaks available! – while it routinely enforces draconian laws with regard to ‘congregation’ and the right to protest. In this context it seemed that Belief was there to actually encourage the Singaporean people to, well, believe.. 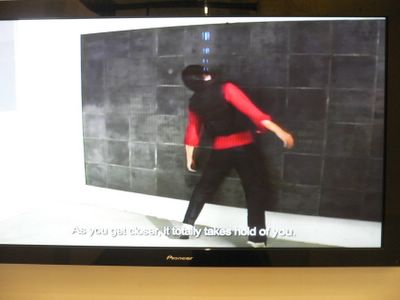 The Singapore dream is a mantra to consumerism – the 5 C’s of Success – career, credit card, condominium, car, and country club. Education, while free, is primarily a head-downs rote learning system with a big leaning toward ‘measurable’ subjects like math and science. These and other factors in combination create a problem. Singapore has bred a nation of obedient, largely well-off but unquestioning consumer citizens, while the country is experiencing a brain drain as a sizeable number of its young talent, many with a foreign education under their belt, choose to stay overseas. With all of that in mind, Director Nanjo says he didn’t want to create a biennale that was controversial, but rather one that created dialogue. And so, welcome to the brave new world of Art as Social Engineering!

In tandem with the Biennale, the NAC (National Arts Council) formulated an extensive education program. First, teachers were invited on a tour of the various venues where they were given education packs with the instruction to come back with their class. A series of collectible badges (in freebie, collectible mad Singapore) were also strewn throughout the various sites as added incentive. The School of the Arts, a brand new art school is set to open in 2008 and will offer six year courses for students from the ages of 13 to 18 to complement the two existing graduate art schools. To encourage the grown-ups, the small charge for a pass to the major sites was waived over the public holidays and eventually scrapped altogether in the final weeks. Local press coverage was flag-waving with a super-enthusiastic tone of ‘hey, this is art. It’s fun! Try it you might like it!’ And so we did. 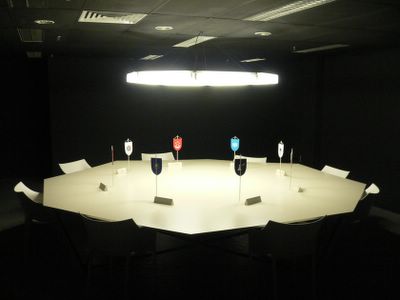 YKON are a Finnish collective. This project is called M8 – Summit Of MicroNations, 2006. In one room, an octagonal table (i.e. not quite round) is venue to a summit of eight fictional mini-states with names such as Space Frontier Republic and NSK State In Time and one called, oh, The Republic Of Singapore – each represented by it’s own little flag but with nobody actually there. From another room emanates the sound of continuous, uproarious laughter and it’s here you could see a video of the summit’s representatives in action around the aforementioned table. And that’s what and all they do – piss themselves laughing. A little give-away booklet informs us further. The section about the Republic of Singapore introduces us to Lim Kong Soon (76) retired politician (who can they mean?), whose dream it is “to make sure every button in Singapore works” and who considers air-conditioning the ultimate invention, one which has brought “ control, comfort and prosperity to South-East Asia.”

The whole idea is wonderfully Swiftian but Singaporeans are not accustomed to satire, and certainly not directed at the State. Those we spoke with laughed along, though politely and a little sadly once the mockery sunk in. The point was certainly not lost on them, particularly as everyone is aware of the recent hosting of the IMF/World Bank conference here and the resounding silence of protest banned. 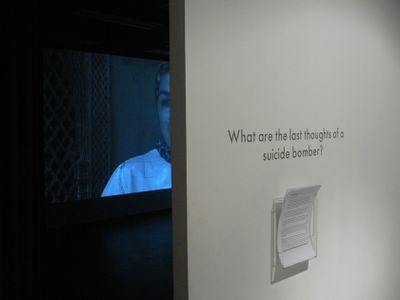 Tomas Ochoa, The Myth of Sisyphus, 2006.
Two channel video installation.
We spoke to a teacher (who asked to remain anonymous) who’d seen the following pieces – both labeled video installations but documentaries really – and had drawn her own interesting conclusion. First was The Myth of Sisyphus by Ecuadorian artist, Tomas Ochoa. In it, random people from Marrakech and from Zurich are asked what they think the last thoughts of a suicide bomber might be. And then there was The Last Supper by Swedish artists Bigert & Bergstrom. In this work we are taken on a meditation on the last meal served to those about to be executed from a number of perspectives- death row reprievees, the last-meal chef of a Texas Pen, executioners etc. The thrust of the argument built was that the last meal/last supper has lost its meaning in terms of symbolic absolution and redemption (in the Christ-like sense). Now, they argue, it’s become a kind of cruel contract by which the soon-to-die accept their guilt (and the punishment) by having their last act of free -will (in choosing their food) be served up as an act of generosity by the state.

The conclusion our teacher friend had arrived at was that the suicide bomber had offered his own life to a cause as ordained by God in pursuit of a better world – a self-imposed death penalty in the form of a sacrifice. The sacrifice the state had made however was to have to put someone to death in the cause of “maintaining society’s way of life”. The difference, as she saw it, was that “the bomber was willing, the state obligated.” Most people we tried to engage on the subject of the death penalty, of which Singapore is a leading proponent, were resolutely tight-lipped on the subject. But at least work like this is in the public arena, albeit niche. 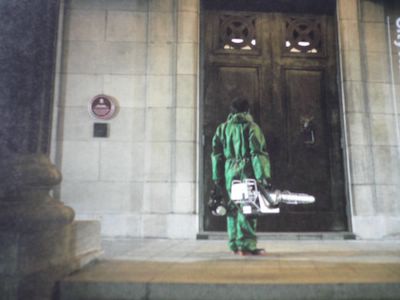 Lim Tzay Chuen, The Opposite Is True #2, 2006.
Performance documentation.

Meanhwile, a Singaporean artist Lim Tzay Chuen whose nicely insidious, interventionist action in City Hall, was performed before any artworks even entered the building. Dressed in a full-protection chemical suit and face mask, carrying a Skyhawk Thermal Fogger, he sprayed the entire building with synthesised human pheromones (biochemicals that affect such things as mate choice, the recognition of one’s own family members, and the ability to “smell” the difference between friend and foe). Because it wasn’t there as a work to be seen, we felt we couldn’t really talk to people about it as such. Instead we smiled at everybody. Most often they smiled right back. A job well done then. 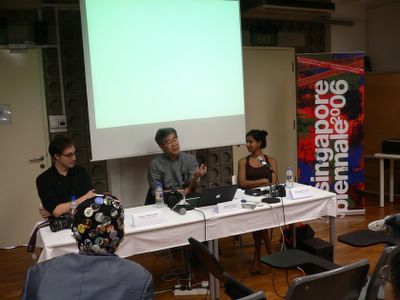 In the closing Q & A session last Friday, Roger MacDonald, one of the curators, said, “Even if the government has an agenda, we’ve planted seeds in the community which the community does with as it wishes…these things cannot be controlled fully” The rough, end-of-show figures claim 900,000 visitors to the various venues and events (though the inclusion of the pieces on mall-to-mall shopping stretch Orchard Road in shopaholic Singapore could be argued to have inflated that number).

So has the Biennale had the desired effect? Well, not yet. You don’t shift a people’s perspective that easily after 40 years of social engineering. If the problem of a lack of creativity is to be truly addressed it’ll take a lot more than a big art exhibition every two years to fix it. Open-mindedness and the willingness to engage in debate as a precursor to a more general ‘creativity’ has to be encouraged at a societal level and accompanied by certain freedoms of expression; including those of the press and the ability to voice dissent through protest. But perhaps a start has been made. Will there be another? Well, we hope so. While the next director wasn’t announced at the end, as happens in Sydney for instance, there’s no doubt this was an interesting event. As someone pointed out with a certain Singaporean logic, “You can’t call it a Biennale if there’s only going to be one.“