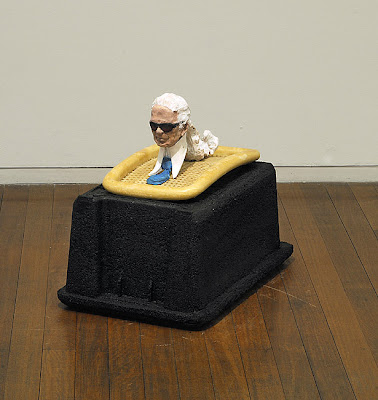 “By 1992, Egypt-born Australian artist Hany Armanious had exhibited his work in five solo independent or commercial gallery and two influential institutional exhibitions —the 1991 Australian Perspecta and the 1992-93 Biennale of Sydney: The Boundary Rider. By the end of 1993 his work had been included in many more exhibitions including the Venice Biennale’s 1993 Aperto exhibition. In his review of Armanious’ 1992 exhibition at Sydney’s Julie Green Gallery, Jeff Gibson made note of the decrepit (“scungy”) aesthetic at play in Armanious’ work: “The objects (ready-mades), artworks (drawings, paintings, and sculptures), and assemblages crammed into this exhibition are mostly composed of used and abused materials—‘crippled’ armchairs, discarded appliances, packaging, plastic utensils, and so on.”

“Gibson also evoked the works’ commentary on consumer waste, but it was the humorist in Armanious that stood out: “Were it not for the extremely endearing and perverse humour that this exhibition exudes, we might not wish to further pursue such an obvious challenge to connoisseurship.” Later, Gibson referred to Armanious’ “comic-artistic terrorism”. Armanious’ early works resonated with conceptual import, flirted with transcendentalist themes, and showed an unusual sensitivity to degraded materials; however Gibson’s review of Armanious’ work made no reference to the abject or to grunge.

“The oddly comic aspect of Armanious’ work, along with emerging artist Kathy Temin and some other Australian artists who had already established careers, was explored in the exhibition Wit’s End, curated by Kay Campbell and shown at Sydney’s fledgling Museum of Contemporary Art from February to May 1993. […] Kay Campbell explained in the book accompanying the exhibition: “[The artists] contest the modern view of the world in a way which is intrinsically comic by at once acknowledging and opposing the banality, futility, and misery of life [thus they] create a disjuncture of meaning, liberating stereotypical cultural idioms and subverting codes of understanding.” Of Armanious’ work in the exhibition Campbell said: “Works are not regarded as individual self-contained entities, they interrelate in multi-layered and witty relationships linked to the physical and contextual space in which they are exhibited.”