New York Beat Movie (Downtown 81) – 1981: Rambling, amateurish and often incoherent, this film portrays the day-to-day routine of Jean-Michel Basquiat: artist and (sometime) musician, as he tries to survive amidst rappers, junkies, gangsters, strippers, models and uptown art-lovers. It’s an interesting time capsule of Post-Punk, No-Wave New York, with some fascinating vignettes of 80’s New York, but it doesn’t feel like a finished movie. However some rare and raw performances from Deborah Harry, DNA, James White and the Blacks, Lydia Lunch and Basquiat himself with his own band, Gray, make for moments of excitement among the tedium. 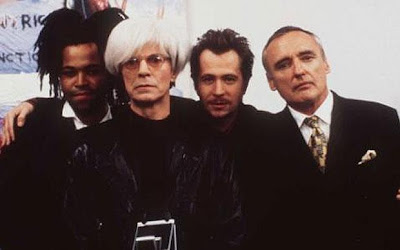 Basquiat – 1996: ‘Basquiat’ tells the real life story of an anonymous and homeless graffiti artist, Jean-Michel Basquiat, as he is ‘discovered’ by Andy Warhol, becomes an art star almost over night and then tragically dies at the age of 27 from a drug overdose. ‘Basquiat’ is stylish but dishonest portrayal of the artist. Directed by New York artist and former friend Julian Schnabel, the film seems to be a platform to aggrandize his own legacy, instead of Basquiat’s. He went so far as to paint all of Basquiat’s paintings for the film, as well as portraying his own role in the film as the sole friend and saviour to the troubled artist. The actor Jeffery Wright felt that his performance of Basquiat had been “appropriated” by the director, and the end result is an overly egoistic mess that fails to portray the purity or authenticity of Basquiat’s art.