The world outside Sydney is a fiction. It’s what people who live in Sydney like to invoke when they’re talking about people other than themselves. At Nell’s show Happy Ending at Roslyn Oxley Gallery there are a series of works that manifest this fiction from the point of view of someone who was born and raised in Maitland before moving to Sydney. The works, a series of paintings and a floor sculpture, are themed around the vernacular language of life and death found by the sides of Australian roads – the crosses that have been erected in memory of car accident victims – and in the pantheon of necromantic imagery such as ghost faces from video games and the curled snakes of tattoos and panel van art that makes up the underworld of popular imagination.

To people living in inner city Sydney this kind of material feels strangely exotic and yet eerily familiar. It is the language of white Australian suburbia and the landscape of “Greater Sydney” that mass of land that stretches north and west to take in Maitland and Newcastle, south to Wollongong and west to the mountains. There are exhibitions and then there are room notes. The room notes to Nell’s show make a few rash claims, the most interesting of which includes these two quotes:

That teenagers get killed in cars is a statistical given. Fate tallies the magnetic attraction of death. Kids catapult along bitumen like suckers for punishment. Right on target, in the thick of it, Nell grew up in Maitland N.S.W., not far from the industrial town of Newcastle, (live according to rock music -have fun at all costs – clock-up some big ones – witness life spin out – see them all lose it) But, happily, Nell escaped more-or-less intact and made for the big smoke … Once upon a time…

Freeways grant you access to the Australian landscape. (It’s all elemental out there.)

It certainly makes you wonder how far “out there” the unnamed author means. If he or she means outer space, yes, it’s noble gasses and metals and absolute temperatures in space, but any closer to Earth and the claim starts to look shaky. It may well be that once outside the cafes of Darlinghurst the highways that stretch to Erina Fair look like the road to Hades, but in practice it’s no different to Upper Forbes Street. Just as there was a cross on the side of the road just near the golf course at Umina to commemorate a much loved local police officer, there was a wooden cross stuck to a tree outside the Christian Scientist Church in Darlinghurst to commemorate the death of a local prostitute. Nell’s apparent escape to Sydney away from authenticity is a double bonus – not only do we get to enjoy working class exotica, she gets to tell the tale as well. 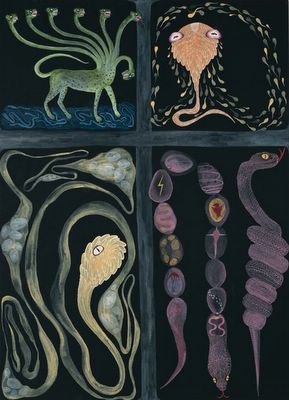 Guardians of The Eastern Dark, Nell, 2005.
Courtesy of the artist.

It’s unfortunate that the work is framed by this essay because the paintings are strong enough on their own, and so evocative of their source, that adding these kinds of fictions does no good for anyone. The playfulness of their theme and the lightness of their execution is a real delight an, next to the showroom feel of the group show taking up the gallery’s big space, there’s a lot of soul in the work. Nell’s conflation of pop culture elements is pure fun – the ghostie from the old Pac Man game wearing an eye mask is titled The Ghost Who Walks Never Dies connecting the 70s icon of arcade games to the ever lasting Aussie mythos of Mr. Walker, a.k.a. The Phantom. In Am I Ever Going To See Your Face Again?, the title of the sculptural work that recreates a road side memorial, complete with Jack Daniels bottle, a lizard and a mound of dirt/plastic – the spirit of Doc Neeson reaches down from rock heaven to accompany the soul of the departed to afterlife to the tune of The Angels greatest hit. There’s also an interesting nod to a very obscure piece of Aussie rock history in the work called Guardians Of The Eastern Dark. Rock nerds would know that The Eastern Dark were the band project of the late James Darroch, former guitarist with The Celibate Rifles, who was killed in a car accident while on tour in the early 80s. Knowingly or not, Nell has managed to bring together a complex array of allusions that support and reinforce one another while remaining true to her home – you can take the girl out of Maitland, but… Rock on.

No Space, Some Phat…