To celebrate Australia’s progression into Round 2 of the World Cup, we’re pleased to announce The Art Life Fantasy World Cup Competition! We’re offering a lucky reader a special, never-to-be-repeated PRIZE PACK that includes DVDs, magazines and an attractive tote bag! Wait, you’re saying, what the hell does this have to do with art? As Jean-Paul Sartre put it, “In football everything is complicated by the presence of the opposite team”, an observation as true to art as it is to the beautiful game. 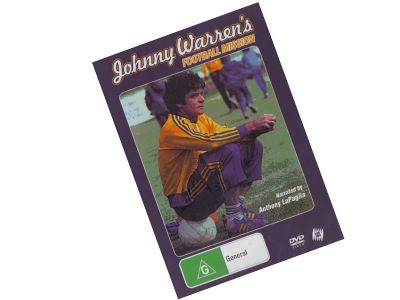 So what do you win exactly? FOUR DVDs – Rise of The Roos: The Road to Germany 2006 narrated by Les Murray, The 2006 Hyundai A League Inaugural Season in Review, Sizzling Sydney: 2006 Hyundai A-League Champions Sydney FC in Review and the piece of resistance, Johnny Warren’s Football Mission [narrated by Anthony LaPaglia in his scary trans-Pac accent] – “This fascinating and moving film charts the rise of the soccer legend, from his early days growing up in Botany in the south of Sydney where he dared to choose football over rugby league, through his illustrious playing career both at his club St. George and as “Captain Socceroo” and his continuing influence throughout his life on the sport he loved both at home and abroad”. BUT WAIT – You’ll also get your hands on the extremely limited, much prized and highly sought after official BIENNALE OF SYDNEY: ZONES OF CONTACT 2006 PRESS PACK which includes a map of the venues, a bottle of Santa Vittoria water, a pamphlet of Biennale of Sydney: Zones of Contact highlights, a packet of Auoria Coffee Flavoured Mouth Strips [Caffe Latte flavour] and three special copies of Australia’s leading art publications: Australian Art Review issue 09 November 05 – February 06 [this copy returned from The Hills Newsagency RRP $18.95], the last ever issue of State of The Arts with a special “fashion expose” and lead article “heroin’s effect on art” – a must have as they won’t be priniting any more of these babies – and a copy of the latest [summer 06] issue of Art Asia Pacific published in New York and featuring some Australian and Euorpean art and a special feature on architect’s Lego fantasies!!! All of this delivered to your door in a Biennale of Sydney tote bag!!!*

So what do you have to do to win this incredible prize pack? Nominate your fantasy world cup art team [11 members] comprising either Australian or international artists, alive or dead. Would Brett Whiteley make a great striker? Could Modigliani transfer his talents with the neck to great headers? Could plucky Mathys Gerber take his ball talents to the professional field or would Daniel Von Sturmer be too much of a wuss to be in the midfield? Is Picasso the obvious choice for goalie? Would winger Donald Friend be trusted in the change room and could star manager Tim Storrier take the team all the way to the finals? Email your team pick to theartlife[at]hotmail.com and we’ll publish the best teams. The winner will be announced after Australia faces Italy in Round 2.

*[We won’t be including the packet of biscotti from the Press Pack as it was already past it’s use-by date when we got it and it tatsted like crap anyway].

Tell Me What You Really Think