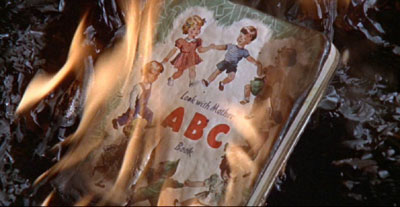 “21 January 1965. Francois Truffaut wrote: ‘There will be as many literary references in Fahrenheit 451 as in all of Jean-Luc’s eleven films put together.'”

“On the Parisian front, there have been a couple of articles lately about the Musee du Quai Branly and its Aboriginal art component. There’s some sense that the importance of the Australian contribution has been over-emphasized: at least the French seem to be taking the line that Australia is but one country among many who have contributed to the making of Chirac’s monument. They are also busy defending the museum as an institution that honors the world’s cultures, rather than one that glorifies France’s colonial empire: the politics look a little different to those in France than they do to proponents of Aboriginal art in other countries. On the Australian side, there seems to be a bit of a letdown. Miriam Cosic‘s article in the Weekend Australian notes that some feel the art has been reduced to interior decoration. She also quotes Stephane Jacob, a longtime promoter of Aboriginal art in Paris, as warning that Australia must view the opening of the Musee as a beginning, rather than a culmination, expressing the hope that the Australia Council will assist in mounting exhibitions in Paris in the future. 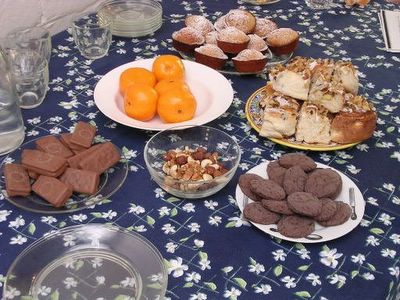 “Notwithstanding the slender turnout from the SLAC/Bilateral Petersham contingent, the hot topic of female spectatorship at raunch events like live jelly wrestling was spectacularly and disturbingly foregrounded during last week’s excursion to The Oxford Tavern.”

“When my canvasses start out with black circles, one can be almost certain that something’s wrong. Is it a sphere? Is it a black hole? Does it denote presence, or absence? Nevertheless, all that’s left is for one (in this case, me, the one holding the brush) to go with the flow, and listen to the circle. What is it saying? What does it demand? Am I nuts? most likely…” 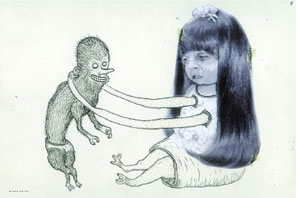 “Scene Two: Dinos and Jake Chapman building public art. Just behind where the beach is situated there are some snow covered slopes where Dinos and Jake are constructing what looks like the legs and paws of a lion (or some other big cat) on the side of the mountain. Each leg measures about a kilometre and it looks as if they have been carved out of snow but they are actually using chickenwire armature with plaster on top to simulate snow. One of the brothers is angry because the other isn’t pulling his weight. Some areas of the leg remain unfinished. They are both wearing ski gear. Random skiers use their sculpture as a ski jump, flattening the paws – proof that this sculpture was meant to be ephemeral and that nature prevails…”

“My favourite bit of the biennale so far has been Olga Chernysheva‘s video pieces at the ACP (australian centre for photography) – which is up the fashion strip end of PAddo. (257 Ocker Street). Nice weird, quirky details- like little boys grimacing in front of gyrating cheerleeders, and some old woman polishing her medals and preparing a picture of Stalin at the end of some march – meld nicely with a longer moving piece going through a train….. the room has a nice couch and thick black curtains too. Actually maybe my favourite biennale bit is the foyer of 4A in Haymarket. Its all Pink! FLOURO PINK – with HELLO KITTY curtains!!!! (mayhem reccommends that you buy a pie or some chocolate nearby and then just go and stand in the pink space and you’ll feel ocmpletelly happy even if you don’t understand the art…”

“At (yet another) forum yesterday on crrritics, the Australian’s Arts Editor Miriam Cosic told me she was shocked at the lack of rigor in Australian academic and alternative writings about art. That may well be true, but rigor is not conspicuous in some mainstream reviewing, either. John Slavin‘s review of Defixiones is a particularly fine example of this. Among other things, it shows a staggering ignorance of 20th century poetry. That wouldn’t matter if he wasn’t writing about it with the authority of Melbourne’s major daily broadsheet behind him – many people are staggeringly ignorant of any poetry – but since he was, I think it deserves pulling up.” 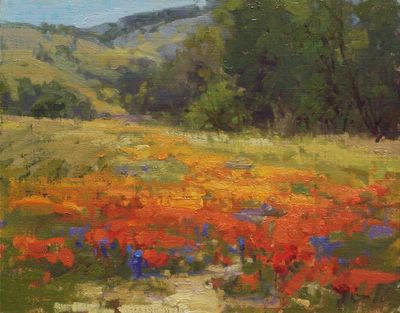 “Why is Kathryn Stats so successful as an artist. Kathryn writes “I think a good painting is like a good musical composition.” Kathryn states, “It has harmony and rhythm, contrast and theme, sometimes even soloists. Those elements rarely just occur in a natural landscape. I find that I emphasize with detail and color, omit some things, mute others, even rearrange elements to create a composition that conveys my visual experience, my joy, to the viewer. It is this challenge that keeps me painting.”